Hololens from Microsoft: we tested the augmented reality headset

Microsoft Hololens virtual reality (VR) mask is now available for sale in France. It is marketed from 3.299 euros. A release on the market that will be decisive for the future of VR in France. What will be its uses ? Why could she find her El Dorado in social networks ? New media specialist Eric Scherer (France Télévisions) answered these questions in July 2016 in an interview to be seen on video on our website.

1 year and a half. That’s how long it took to be in the same room as him. 1 year and a half since this first video presented at a Microsoft conference in January 2015. He is the Hololens helmet, a futuristic design object straight out of a science fiction film, capable of superimposing holograms on the world around us. Ultra confidential project of the firm of Redmond and developed in the greatest secrecy for several years, the helmet is difficult to approach. The device does not show itself much if not in increasingly enticing and promising videos of a revolutionary technology. When a developer – only version is released in March 2016, the headset becomes more accessible. Several development studios are starting to present the results of their work on this new platform. This is particularly the case for the French studio Asobo, a long-time partner of Microsoft who invited Sciences et Avenir to a demonstration we made in September 2016.

The Hololens, a high-tech crown with harmonious curves of almost 600 grams

It is in their premises in Bordeaux that the employees of Asobo reproduced a salon that serves them as a test area. Sofa, coffee table, shelves, everything is there. This decor straight out of a Swedish furniture catalog is ready to smile as it is incongruous in the middle of an open space, it is nevertheless essential to the design of applications and games for the Hololens. A copy of the headset is waiting for us on the coffee table. High-tech crown with harmonious curves, the helmet weighs almost 600g. It does not rest on the nose, an adjustable headband system to fix it on the top of the head. The object has no cables : like a mobile phone or tablet, it is autonomous.

Only by putting on the mask do we realize that the device is turned on and holograms are already displayed before our eyes. Holograms are projected onto holographic lenses located just in front of the domed visor (and bluish in the photo above). The visor that gives this futuristic look to the device acts as a tinted glass in order to attenuate the external light and make the holograms more visible. The first eye contact with a hologram is striking. The eye and brain are both instantly flattered. The eye first : the display quality of the device is striking. The graphics are of such finesse that they make us realize that, no, this headset is definitely not a gadget. The images are displayed in high definition in each of the two lenses. The brain next : the first hologram we are given to see is a squirrel in an astronaut suit standing on the coffee table. The animal is not clumsily superimposed on the furniture, it is integrated into the decor. Reflexively we raise the headset to check that the table is empty. She is, we lower the visor again, the rodent is still there, waiting for us, tapping our foot. The illusion is perfect. Okay, but what happens if we approach the table ? The picture will jump, the squirrel will shift, and the illusion will be broken. We take a few steps to check this theory, the animal remains at the edge of the table without flinching, regardless of the angle from which we look at it, it is part of the decor. 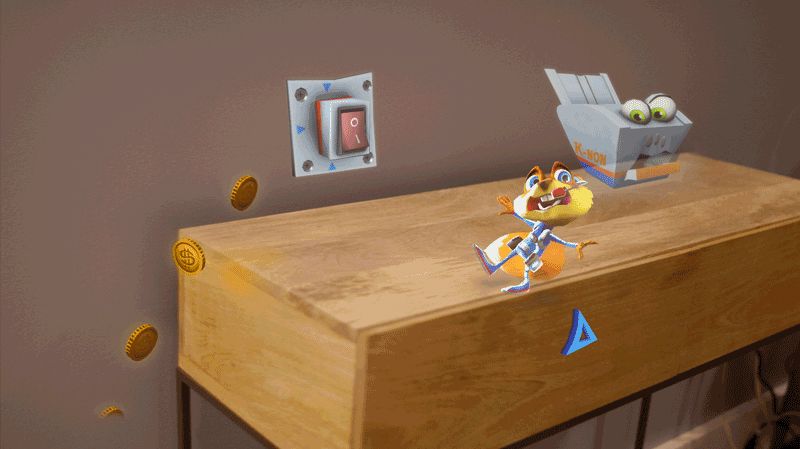 The character reacts according to the real environment. Credit Asobo

Physical awareness of the environment

This technological feat is achieved through a preliminary scan of the part. During the first start-up of the device, it invites the user to scan the surroundings while moving in order to make a three-dimensional model of the room. This 3D model of the room, more or less precise according to the meticulousness with which it will have been made, will be used for all the applications and games available for the Hololens. It is also possible to memorize several pieces. It is therefore thanks to this 3D model that the squirrel is able to move on this table, that it knows the dimensions, and that it knows when it is on the edge of the void and must display an animation mimicking vertigo.

After the amazement of the first moments it is time to take control of the animal in a mini-game where it must collect in a given time a maximum of gold coins scattered on the floor and furniture. The mammal follows a pointer that is directed on the floor and furniture by turning its head. Then comes the second visual shock : by directing the squirrel to the corner of the table it disappears behind ! The geometry of the part made by the preliminary scan makes it possible to display any 3D element in a complete physical awareness of the environment : the helmet knows whether or not it should display an element in the user’s field of vision. The brain is fooled, the rodent is indeed “in the room”. Visually stunning, however, the experience is not free of defects, the biggest being the field of vision rather restricted at first glance. This is because holograms are not displayed in the full field of view, but only in a rectangle the size of an A4 sheet held at arm’s length. A discomfort that eventually disappears with the habit however, a simple rotation of the head to display the elements off-field.

A crime scene in his living room

After the technical demonstration made with Young Conker and his mischievous squirrel, Asobo offers us to try his masterpiece: Fragments. Designed specifically for the Hololens, the title of Asobo is a criminal investigation game set in the near future where crime scenes can be investigated remotely. This is the perfect pretext to reconstruct a fictional universe in the player’s living room. The characters appear in the room, standing or sitting on the player’s couch and deliver the necessary information for his next mission. 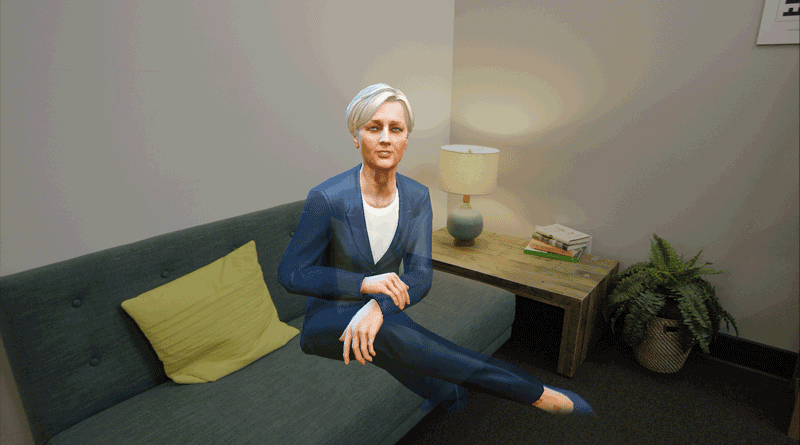 A character from the game Fragments comfortably sitting on the player’s sofa. Credit Asobo

A crime scene fragment is then reconstructed in the room, holograms come to populate the real world. The walls are covered with paintings or virtual electrical cabinets, flyers and accessories litter the floor and tables, transforming in a few seconds the player’s living room into a playground filled with interactive objects. The user can manipulate each of these elements in search of evidence and can, thanks to a virtual desktop, record and analyze all these clues. Here again the application makes the most of the capabilities of the headset by allowing to manipulate objects by “pinching” them with your fingertips or “talking” with the characters aloud. The preliminary scan of the part also allows to display more or less objects. If the player is in a place of modest dimensions, the number of items added will be reduced to a bare minimum, while playing in a large room will offer an abundance of additional elements that enhance immersion. 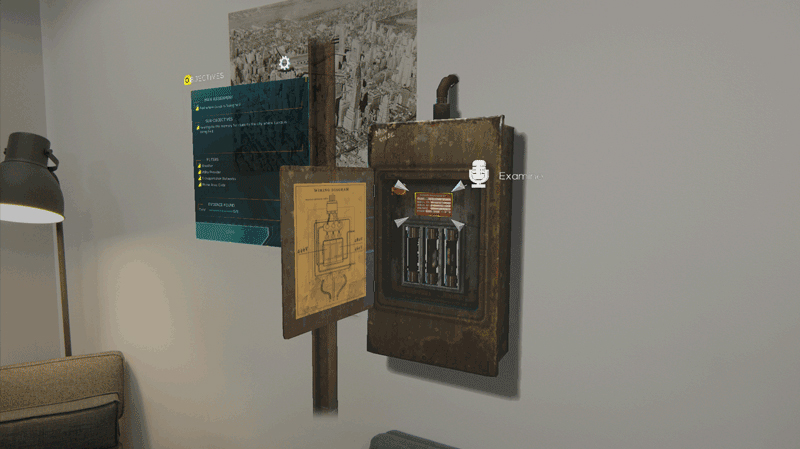 IMMERSIVE. The algorithm of the game will take care of displaying these new elements always respecting the geometry of the room and the laws of physics. In just a few minutes, like Tom Cruise in the movie Minority Report, we easily manipulate interface elements and virtual objects to uncover the mysteries hidden behind every detail of the set. It’s hard to make it more immersive than bringing characters and game elements into the user’s home and that’s why augmented reality differs from virtual reality : the user is in a known environment, the border between real and virtual is only a thin film. Both Asobo titles promise a bright future for video games and augmented reality applications. It remains to wait a few years that the miniaturization of devices and the reduction in the prices of components allow a wider democratization of the process.