Modern techniques of training in the army have long since moved away from practice in real combat – the principle that the ancient Spartans were guided by. Instead, the army forces and the navy, as well as the airborne troops, actively use modern technologies, including augmented reality simulators.

For example, the US military uses video games closely to train soldiers since 2012. VR military simulator is now applied in many armies. The British Army has long adopted the simulators of various military equipment for training pilots, tank drivers, gunners. The decision to use for this purpose military training in virtual reality helps to solve several problems at once:

In addition, with the help of new technologies, you can create a VR virtual army environment that almost completely copies existing locations, and, by the way, the generation process is faster than ever. The basis of the system is artificial intelligence. It uses all visual sources available nowadays to recreate the desired virtual copy: map service data, satellite imagery, and other easily accessible information. Virtual military training is now an integral part of general training. 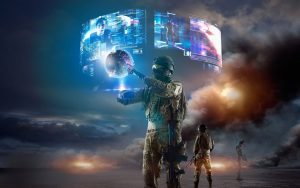 Such simulations will help soldiers better navigate the terrain, plan operations more quickly and more efficiently, and perform a more accurate calculation of each action over time, taking into account the particular location. Already, the US Army can boast a finished virtual version of North and South Korea, San Francisco, New York, and Las Vegas. Why these places? Unknown.

Up to this point, learning in virtual reality was carried out in places that could be described non-specifically. Just select the desired region on the map, and the AI will generate its virtual counterpart. The process takes only a few days.

What Variants of Military VR Games Does Exist Today?

Military train games are not new these days. Both virtual and augmented reality is used in VR train game. Let’s take a look at military virtual reality training.

Use of virtual reality in military training

If we talk about the variety of options for the gaming industry, then it is fully disclosed in the military sphere. To carry out the VR military training and education of soldiers, the army orders software for cyberspace, which helps:

Military training games are created to advance army skills. Besides, this is far from everything suitable for the military goals in VR development, because each area of military science and technology is constantly evolving, and with it, the market of VR applications for military needs is also developing.

Aerospace Industry and Its Needs for VR

In addition to the military units themselves, there is a great demand for virtual reality products in the aerospace industry. This is quite logical because it is expensive and difficult to work out the actions of the astronauts in outer space. But a suitable simulator will help to conduct regular training and develop the necessary skills for those who in the future will carry out flights into space. For example, Chinese astronauts are training for outer space conditions with the help of special VR spacesuits and water pools, getting through various challenges.

Why Do the Military Need VR Technology?

With the help of augmented reality tools, the military can use such specifics of the virtual world:

At the moment, the US Army is making the most contribution to the VR training center development – it is this country that has set the trend for the usage of virtual reality technology throughout the world. Australia and the UK are not far behind. Other states are also developing in the field of VR for special forces introducing BP technologies, but there is little information about practical developments.

Take a look on VR army game to ensure realistic

The VR-Development of Military Games from ServReality Company

Our company has been developing applications and software for virtual reality for a few years. During this period, we have achieved considerable growth and have gained a lot of experience, which we are improving every day. Since the growth of VR military games began from ordinary computer games, we fully utilize all the possibilities of modern game development to present qualitative and fundamentally new products in the virtual reality market that will help the military industry to develop and become more accessible. An army can truly benefit from VR. Thanks to our military Virtual Reality training solutions for the military in the virtual space, you can train your military personnel by spending much less money than with the organization of regular exercises in the field. All the advantages of VR army games, you can ask our managers, will help you to get the maximum result in the training of military personnel in the shortest possible time. Virtual Reality in the military now is absolutely a perfect indispensable tool. Also, get to know how virtual reality is used in education.

Should we use virtual reality in education?

Is virtual reality the future?