A spider dangles from the door frame. Football-sized. Hairy. Disgusting. “Look down at your feet,” asks psychotherapist Andreas Mühlberger. Ahhh. Another brown monster. Menacingly, it raises its front legs, leaves its mouth tool on and snaps. “Calmly take a step towards the animal, ” the professor urges. For people with spider phobia, the purest horror. Even if you know that the eight-legged friends do not really exist, but were developed on the computer.

Every tenth person suffers from an anxiety disorder

Professor Andreas Mühlberger from the University of Regensburg helps patients overcome their phobias with high-tech. With a gamepad in his hands and the head mounted display, a kind of 3D glasses, on his head, he sends them into virtual reality to confront them with their worst fears: the look into the depths, the take-off of the plane or a lecture in front of an audience.

“If you manage to get into this situation and endure it, you will find that the fear subsides by itself and the feared catastrophe does not occur, ” explains the leading scientist in this field. The success is amazing. After a few sessions, most patients are cured.

Worldwide, research is being conducted at full speed on the use of VR technology in psychotherapy. So far, the so-called exposure therapy with virtual reality (VR) in Germany has only been available to the general public in Bavaria: at the university outpatient clinics in Würzburg and Regensburg.

The technology is too expensive, the range of specific software is too small. But in five years, the researcher is sure, it will be widely used in medical practices – and will help millions of people. Because the need is enormous. Phobias are widespread, almost a common disease. According to the Robert Koch Institute, more than ten percent of the population suffers from a specific anxiety disorder.

Here you have a panic fear of a certain situation or an object. “This can lead to the extent that people no longer use rooms in their house for fear of a spider or no longer go to the beer garden – so they are massively restricted in their lifestyle,” says Mühlberger.

Phobias can generally be overcome well. However, this often means a lot of effort. With classical exposure therapy, the psychologist becomes a spider catcher, has to climb narrow elevators with the patient or visit full department stores. “That’s why this happens far too rarely in everyday practice, purely for logistical reasons,” says Mühlberger.

According to him, this is exactly where the advantages of VR therapy lie. “It is much more effective and easier to carry out.“ With technical progress, the scenario can not only be adapted better and better to the specific fear – for example before the start of the aircraft turbines – in the future, but also repeated as often as desired. “In real life, on the other hand, it is difficult to climb seven different towers with the therapist, ” says the professor, who is currently researching social phobias in particular.

Equally important is the acceptance of the advanced form of therapy. “Almost 80 percent would prefer them to the classic confrontation.“ The idea of entering a virtual situation in a protected environment is easier and less stressful for many. Mühlberger is certain: if there were nationwide possibilities for VR therapy, more patients would decide on treatment much earlier.

And the areas of application of cyber glasses are not limited to fears. Addicts could go to a virtual bar and learn to endure the pressure of alcohol, drugs or nicotine, people with social phobias in coffee house situations practice approaching others. Even pain is reduced with VR. At the School of Medicine at the University of Washington, patients with burns are sent to a kind of snow world. “This has a comparable effect as a treatment with morphine,” says Mühlberger, who has an international network. A lot will happen in the coming years.

Sensors of the VR glasses react to head movement

Nicole Vehring was treated in Regensburg. Trembling, shortness of breath, racing heart and the feeling of falling into the depths right away: the mother had the fear of heights firmly under control for years. “I couldn’t even clean the windows in the attic of our house anymore,” says the 40-year-old in retrospect. When her husband and two sons climbed an observation deck, the mother was left behind in a panic. Until she made a virtual trip to the Bottrop Tetrahedron near her home with Andreas Mühlberg. And came back healed after just under two hours. Gondolas, suspension bridges, glass floors? “Are no longer a problem today,” says the woman from the Ruhr area.

She had a lot of doubts in advance. “When I had the glasses on, it looked like a PC game. I wondered if that would do any good.“ However, when she approached the railing of the observation deck, fear sets in.

“The brain processes the situation exactly as it does in reality. Patients show behavioral inhibitions and physiological reactions. Even if the scenario does not seem completely deceptively real,“ says Mühlberger, who has been researching in this field for 20 years. This is made possible by the screen in the darkened headset. “Each eye sees a different picture. This is how depth perception is created. The so-called stereoscopic view.“ 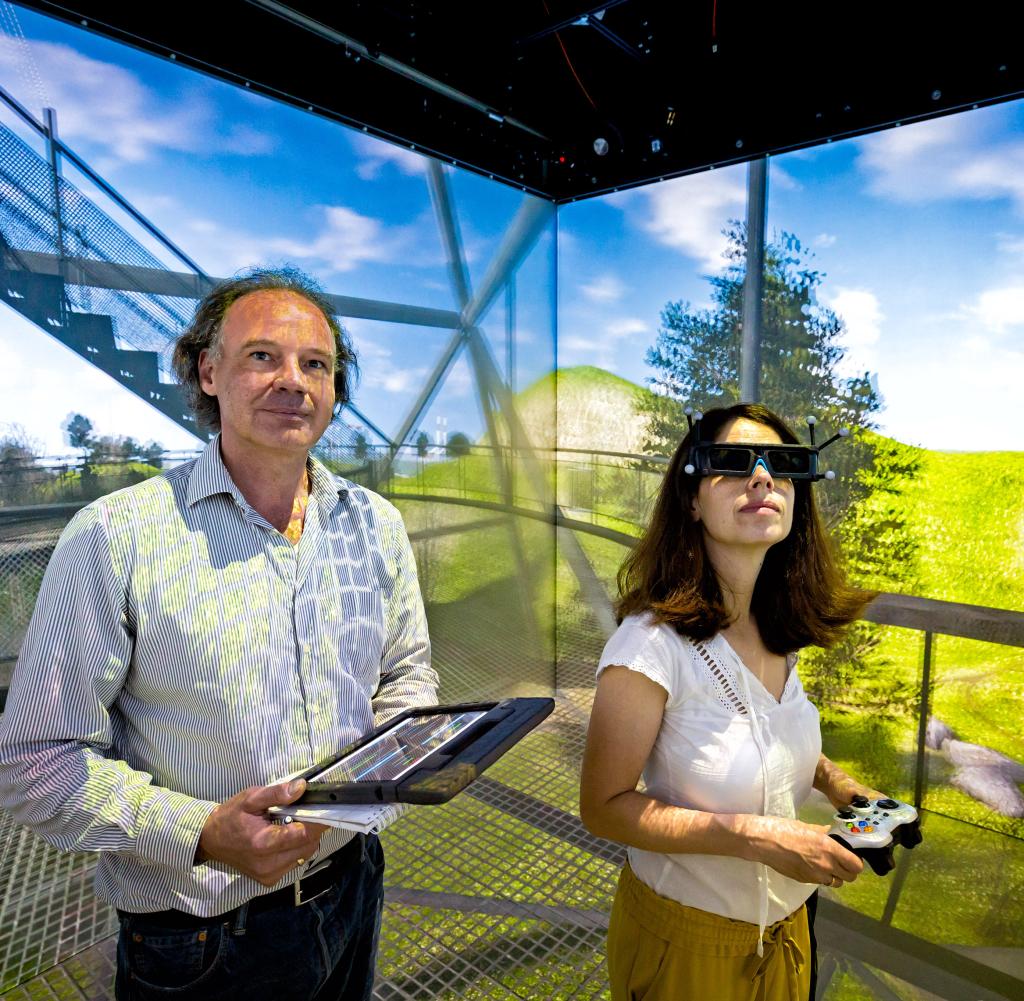 The sensors of the cyber glasses react to every movement of the head, the patient has a 360-degree view and the feeling of moving freely in virtual space. This sometimes also leads to side effects. “If the image is not tracked quickly enough, cybersickness occurs – this is like a kind of motion sickness, but it is easy to get a grip on.“ In order to trigger the emotional networks even better, the professor and his team are trying to appeal to all the senses. Through a gust of wind, birdsong, smells.

It is important to choose a situation that the patient can cope with. “My task is to make sure that the patient stays there, experiences the fear consciously and notices how it goes away again – without me doing anything.“ The worst fears do not materialize – that is the decisive experience.

But how does panic fear even come about? This is what Mühlberger and his colleagues are trying to find out in preliminary talks. “There are different theories for the causes,” says Mühlberger. Often phobias would develop early. For example, through model learning, if the mother has a problem with tight spaces, the child looks away from this. An unpleasant experience with a dog or at the dentist can also be a trigger, “ explains the professor.

With height and water, an innate fear is suspected, which must be unlearned in the course of development. “Children who have fallen from a tree are more likely to have no phobias,” says the 47-year-old. By the way, the fact that many are afraid of spiders or snakes is due to evolutionary biology. “It’s still stored in our brain that they could be toxic. That’s why hardly anyone is afraid of sockets, although you can get an electric shock there.“

At the end is the reality test

Even if the patients are doing well in virtual reality – no one can avoid the reality test. “Most of them are totally motivated to implement what they have learned. It is important to confront each other again and again, otherwise the fear can become stronger again,“ says Mühlberger.

In any case, Nicole Vehring has only one wish after her therapy: “I wanted to go to the real observation deck.“ She did it. “I had a tingling in my stomach, but not from fear, but from happiness,” she says.