Today, virtual reality has firmly entered our daily lives. Initially, this technology found the widest distribution in the entertainment industry, but now scientists are talking about the broad prospects for combining virtual reality and medicine. The prognoses are that in recent two years there will be a great increase in virtual reality use in medicine – it will reach almost $2.5 billion in the whole market rates.

Talking about practice, then already last year the surgeons of the London Hospital conducted a successful operation to remove cancer. The peculiarity of a so-called VR operation was that in the course of the operation virtual reality technology was used – in particular, Google Glass usage. Let’s discuss the uses of virtual reality in medicine and its future.

The surgeon transmitted all the manipulations that were made during the operation to the web, and at the same time, tens of thousands of students watched the broadcast, who not only could see the complex operation in real-time but also asked the questions to the doctor. They were texted in glasses, and the surgeon gave the answers by voice during the broadcast. Thus, virtual reality in medicine and virtual reality surgery games has already become popular. Its dignity is not limited only by such broadcasts. Let’s take a look at how can virtual reality be used in medicine.

Benefits of Virtual Reality in Medicine

Virtual reality in medical training can be effectively used and is already being used. The doctor’s perception of 3D information about the patient such as the tomography method, 3D data of the X-ray machines or USI, etc. can significantly improve the quality of the work of physicians. Interactive models and organ reconstruction are already used for student’s training, designing the surgical intervention. Virtual operation games are absolutely helpful for surgeons.

With the help of specialized software, physicians can develop models of individual prostheses based on a patient scan. And the student can take all the advantages of VR medical games during the educational process. There are some of the recent inventions adopted for medical studies.

The Examples of the Practicing VR Simulators in Medicine

Our first example, described below, is the simplest one. There are lots of VR training software and hardware decisions, that are in use now. Let’s point out some of them for the complex understanding of what is virtual reality in health protection studies.

3D surgery games are good for medical training. Besides, virtual medical games are not the only way VR technologies are intruded into healthcare. Let’s talk in a few words about the cure methods using VR.

VR as A Therapy – How Does It Work

That’s the second dominant research division of VR technologies in the healthcare industry. It comes about the VR methods of physical and mental disease treatment. Here are some examples of the application of virtual reality in medicine.

There’s no other progressing disease of older age patients than senile dementia, taking so many troubles as to the patients themselves so to their relatives. The lack of short-term memory gets them to life quality loss. Virtual Relief has developed virtual reality glasses for people suffering from dementia – senile dementia. A person with senile dementia is difficult to navigate, absorb new information. In a virtual reality for such patients, a comfortable environment is created. In this environment, a patient can train their memory, improve language skills and perform the simplest exercises for planning tasks for the day the via gaming process.

Muscle paralysis is the other cause where VR technologies can show efficiency. There was a case when the scientists invented the full exoskeleton for a paralyzed Brazilian with the VR headset for controlling it through the brain signals. Those scientists nowadays are working under the effective paralyzes cure with the help of virtual reality. They have proved that after prolonged training in the VR glasses, the paralyzed patients recover the nerve connections between the brain and the muscles.

The Swiss company Mind Maze uses virtual reality to restore motor function in patients after a stroke. The exoskeleton synchronizes the movements of the patient with the picture he sees in the 3D glasses. The patient sees how virtual reality makes fine motor skills: moves the ball, squeezes it.

One more way of VR usage for medical purposes is phobias and serious mental illness treatment.
Researchers from Oxford University invented a way to treat paranoia with the help of virtual reality. With the help of a specially designed headset, the patient is placed in an enclosed space (for example, an elevator), which is gradually filled with strangers. 20% of participants in the experiment recorded a decrease in paranoid manifestations.
For over 20 years, US leading clinics and medical centers have been using virtual reality to treat post-traumatic stress disorder in soldiers. There’s a safe environment created for the veterans for adaptation to 3D glasses. With the help of controlled stressful situations, the former military is trained to restrain negative emotions that can be dangerous for others.

There’s a prospective way of using virtual reality means in anesthesia. The idea of using VR for anesthesia was firstly proposed by the American psychologist Hunter Hoffman, a pioneer of interactive technologies in medicine. It is likely that virtual anesthesia in the future will compete with general anesthesia.

Are There Any Disadvantages of Virtual Reality in Medicine?

VR technology has not yet become a ubiquitous medical routine. The examples given below, primarily in the field of surgery, are more likely to research developments. Today there are only a few a VR’s disadvantages that are obvious:

Surely we can say that many of these technologies will become quite common very soon. Developments in the field of big data and artificial intelligence are able to achieve the introduction of virtual reality into medical practice.
Artificial intelligence, analyzing three-dimensional data, is already able to give hints to doctors. It is possible that the neural network will soon begin to perform surgical operations independently. 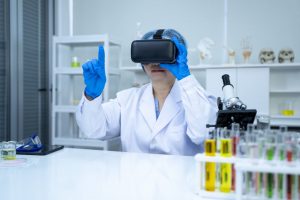 Virtual reality technologies are increasingly gaining popularity in the use of healthcare development. In this way, virtual reality can be used to develop rehabilitation programs. The treadmill is connected directly to the virtual reality treasure, as well as safety mechanisms that prevent injuries to patients undergoing the rehabilitation program. These programs help you to be rehabilitated much faster for patients with motor problems and movement. Strong motivation is created by creating the effect of achieving opportunities and realizing human desires with the help of electronic brain impulses. In addition to improving cardiovascular health, the active use of virtual reality also helps to solve a common problem when wearing a VR headset.

Such rehabilitation programs require large expenditures for the full implementation of the project. Therefore, the solution will be available in every corner of the world most likely closer to 2030.

Do not lose the opportunity to create your incredible virtual reality solution that will change the future — contact the ServReality team!