which areas should you look at

47% of professions in the United States were in the zone of extreme risk. This is the conclusion reached by Benedict Frey and Michael Osborne, authors of the report “The Future of Employment” from the University of Oxford.

And where will programmers be needed? Based on open data and research, we have compiled a selection of IT areas that are more likely to need developers in the future.

Augmented Reality: From Entertainment to Learning

The technology of superimposing content on reality was originally used in games and advertising, and is now being actively implemented in large companies to train personnel, especially in harmful and dangerous industries.

The average salary of an AR developer today is more than 75 thousand dollars a year. And there are more than 19 thousand AR-developer vacancies in the USA alone. If the market continues to develop, the demand for specialists will only grow.

Key AR technologies: real-time object recognition, realistic 3D scanning and the construction of a grid of the surrounding space.

The prospects: the technology is still expensive, and it is inconvenient to use it. Because of these problems, the market growth has slowed down. Their decision will give an impetus to development.

Materials on the topic AR

Virtual and Mixed Reality: so far only for big business 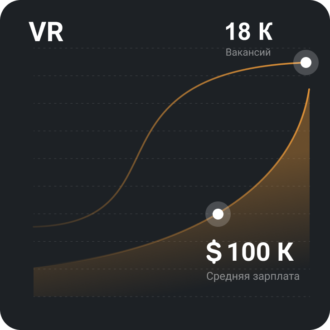 Mixed reality (MR), unlike augmented reality, implies the interaction of real and virtual objects. Virtual reality (VR) involves replacing all or most of the incoming signals for the senses and immersion in a completely artificial world. In addition to games, technologies are used in education, industry, construction, military training.

Virtual reality developers on average receive about 100 thousand dollars a year. The number of vacancies for MR and VR developers in the USA is more than 18,000. In general, the situation on the labor market is similar to the direction of augmented reality.

Trends: reducing the size and cost of VR glasses and helmets.

The prospects: the range of applications of this technology is huge, but for now it is a long time to make virtual worlds, and there are few users due to the high cost and imperfection of VR devices. Solving these issues will give an incentive to the development of the direction.

Materials on the topic of VR/MR

Robotics: from industrial to domestic use 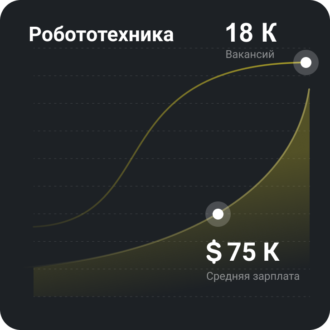 As long as there are non-automated types of human activity, the production and programming of smart devices will be relevant. A robot vacuum cleaner is good, and a robot dusting or a cook is even better.

The average salary of a robotics developer is about 75 thousand dollars a year. And there are more than 18,000 jobs related to robotics in the United States alone.

The prospects: designing, manufacturing and programming robots is a rather laborious process, often not justifying itself economically. Robots in production begin to pay for themselves in 3-5 years. Because of this, not every employer is ready to implement them. There are still a lot of areas where it is cheaper to use human labor than to spend resources on automation. A less expensive way to create smart devices will give a powerful impetus to the development of technology. It is also worth betting on household robots.

Materials on the topic of robotics 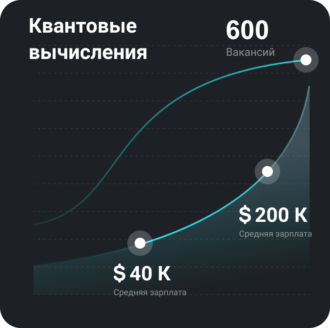 Technology with the most distant prospects. The main advantage of quantum computers (in theory) is the speed of calculations. Especially in tasks where the complexity increases exponentially with increasing input data.

At the moment, the quantum computer market is focused more on research than on mass production. But with the cheaper technology, a quantum programmer will be no less in demand than an ordinary one.

Trends: search for new forms of qubits, their effective connection and programming.

The prospectsIn addition to factorization, quantum computers in theory will be able to simulate complex situations, including the behavior of substances at the molecular level. But first we need to solve 2 main issues: the stability of qubits and their use in large numbers.

Materials on the topic of quantum computing 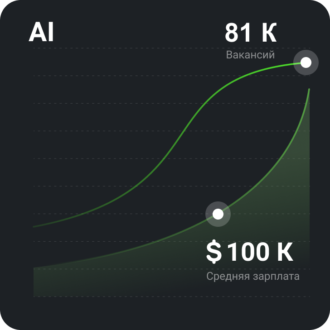 Artificial intelligence systems attracted attention with the development of expert systems first, and then neural networks. The pioneers of the industry expected the appearance of artificial intelligence, but the miracle did not happen. Despite this, the technology is successfully used in projects at the level it has reached now.

The average salary of an AI developer is more than 100 thousand dollars a year. And the number of vacancies is more than 81,000 in the USA alone.

The prospects: there are a lot of unresolved issues in the field of AI right now, including the problem of multitasking or understanding the meaning of text (as opposed to simple word recognition and grammatical errors). But this does not prevent technology from actively developing and being introduced into all spheres of our life. In the studies mentioned at the beginning of the article, it is artificial intelligence systems that will replace most employees, including telephone operators, drivers and accountants.