When a retirement home becomes digital 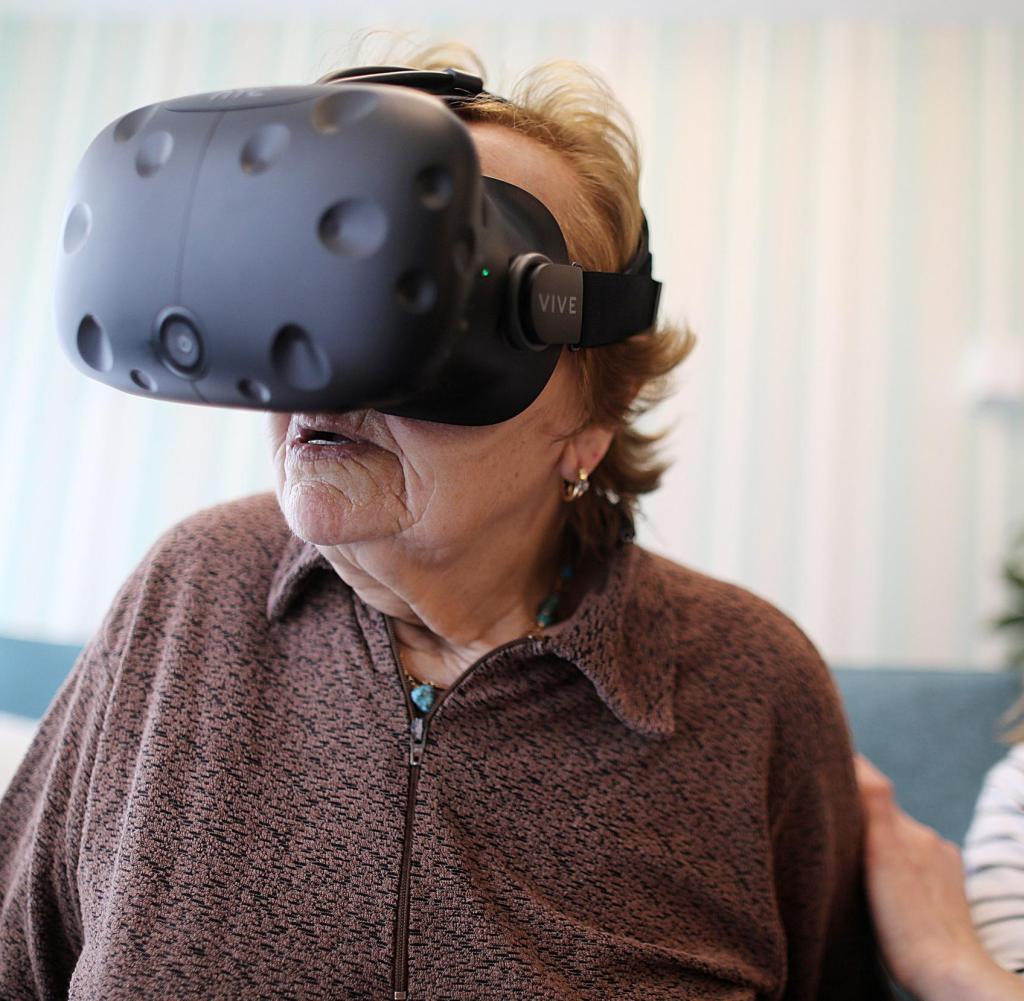 Maria Hertwig is sitting in an armchair more than 450 kilometres as the crow flies from Neuschwanstein Castle. She can, however, pass judgment on the magnificent building of Ludwig II despite the immense distance. “They had good people,” she says. It was almost unbelievable how they got all the material. Her conclusion: “Dat is’ schon schön!“

Hertwig, 93 years old and resident of the Caritas elderly Center St. Maternus in Cologne, sees the fairytale castle in front of her at this moment-thanks to virtual reality glasses. The device allows the gaze to roam freely in a digitally generated environment – a virtual reality. If Maria Hertwig looks straight ahead, she sees the castle. If she turns her head, she can look over the green meadows of the Allgäu. “All rich farmers,” she notes. Lots of land, few houses.

The Caritas-Altenzentrum is a house that experiments with the achievements of the modern world of technology. For example, with video games and smart speakers, i.e. speakers that are connected to the Internet. Residents can ask, for example, if they have an appointment today. And the virtual reality glasses were purchased. It helps with the so-called biography work, i.e. to delve into one’s own history again. Maria Hertwig, for example, was in Bavaria as a child, she loves the area. Hence Neuschwanstein.

Virtual Reality as an opportunity

The Altenzentrum is a testament to the nooks and crannies of society into which new digital technologies have now penetrated, albeit at times rather slowly. And what hopes are attached to it.

“Virtual reality is a way to expand the horizon of experience. This is important, for example, if you are no longer able to go out yourself,“ says the age researcher Uwe Kleinemas. “We also know that the course of dementia can be favorably influenced by mental demands.”In Krefeld, for example, a project was launched in which doctors want to use digital glasses to slow down the course of the disease.

According to Kleinemas, however, topics such as virtual reality and video games in retirement homes are still in their infancy. There are not enough reliable studies on positive effects. So far, a positive effect can only be deduced logically. “In principle, however, the use of such electronic media must be assessed positively, because it can increase the possibilities of compensating for physical or psychological limitations.“

Herbert Mauel, Managing director of the Federal Association of Private Providers of Social Services (bpa), emphasizes that new offers must be measured by whether they maintain existing skills or even improve them. “Virtual reality glasses alone do not fulfill this task,” he says. In recent years, however, a number of promising interactive instruments have been developed to train attention and mobility, for example. Whether this means lasting success, one must wait.

However, Hermann Brockenauer doesn’t really care about long-term effects. Brockenauer is considered a passionate car racer in the Altenzentrum St. Maternus. Now he sits with a controller in front of the rally video game “Dirt 3”. He must choose a car color. “Let’s take black,” says the 77-year-old. “Then you can see the dirt better later.”And nice sound,” so you can hear the engine”.

“There are not so many things for the target group yet,” says Jana Timme, who works in social care. “But slowly she is discovered.“