On his Instagram account, Olivier Rousteing, creative director of Balmain, shows a first look at the virtual showroom where the label’s Cruise collection will be presented this season. Instead of real models, long-legged, faceless avatars with silver-colored metallic skin appear for the collection presentation. One digital model can be seen in a polka dot dress, another wearing a tweed jacket in bubble gum pink. They are walking robotically on high heels through the picture. Finally, an avatar of the designer himself appears on the screen to comment on the designs. Olivier Rousteing is reminiscent of a character from the Millennium hit game “The Sims”, except that his body was reproduced in much more detail than was possible for the graphic designers at that time. Nevertheless – or because of this – the whole spectacle also seems a bit scary at the end.

Virtual “superhumans” instead of models

Somewhere between fascination and trepidation, you can also find yourself at the show by the label Trashy Muse, which offered a virtual star line-up as an alternative to the cancelled Paris Fashion Week. Last week, the creative duo launched the world’s first fashion show with virtual avatars and augmented reality technology at the EP7 Gallery in Paris. The most famous avatars were present, including the first black digital supermodel Shudu, the “virtual superwoman” (that’s her name on Instagram) Dagny and Branded Boi, the brand’s own avatar model.

Their looks are becoming more and more sophisticated, and the artificial characters are now even assigned their own personalities by their creators. These avatars are already the second generation of digital supermodels. Her path has been paved by two important characters in recent years.

Namely, from the character Lil Miquela, who caused a sensation by her kiss with Bella Hadid for a Calvin Klein campaign. Since her first selfie in 2016, she has been booked for various editorials of classic fashion magazines, briefly took over Prada’s Instagram account and modeled for Pat McGrath’s make-up line. Her account now has more than 2.4 million followers.

Inspired more by classic French fashion, the noonoouri, which resembles a manga figure, was created in Germany. She has already collaborated with major brands such as Dior and Mugler, and made up in digital beauty tutorials for Kim Kardashian’s cosmetics line. In addition, Noonoouri is now the first digital person to be signed to the world’s largest modeling agency IMG.

Because so far there has not been a dedicated contact point where you could book digital models quickly and conveniently. In order to meet this increased demand for avatars, the artists Lorena Hydeman and Julia Falkner have founded the modeling agency “Mutantboard” in London. Together with 3D designers and an international network of 70 artists, they create their own avatars, which they run for brands in digital fashion shows.

Falkner is an Austrian fashion photographer and Hydeman Serbian stylist and creative director. Hydeman formulates the model agency’s goal with current demands on the fashion industry and society: “We want a diverse model file with which we not only represent the various artists, but also offer a diverse portfolio with which we stand for inclusivity”. The customer can choose from existing models in the portfolio or create their own characters on request.

The personalized design eliminates the time-consuming castings in search of the right models, who have often come under criticism in recent seasons for discrimination and dubious methods. However, you should plan some time for the digital implementation: “You have to allow about six to eight weeks for a campaign,” says Falkner. However, she is talking about the overall implementation of an entire digital fashion show, on which a team of hundreds of employees works in the real fashion world over six months. 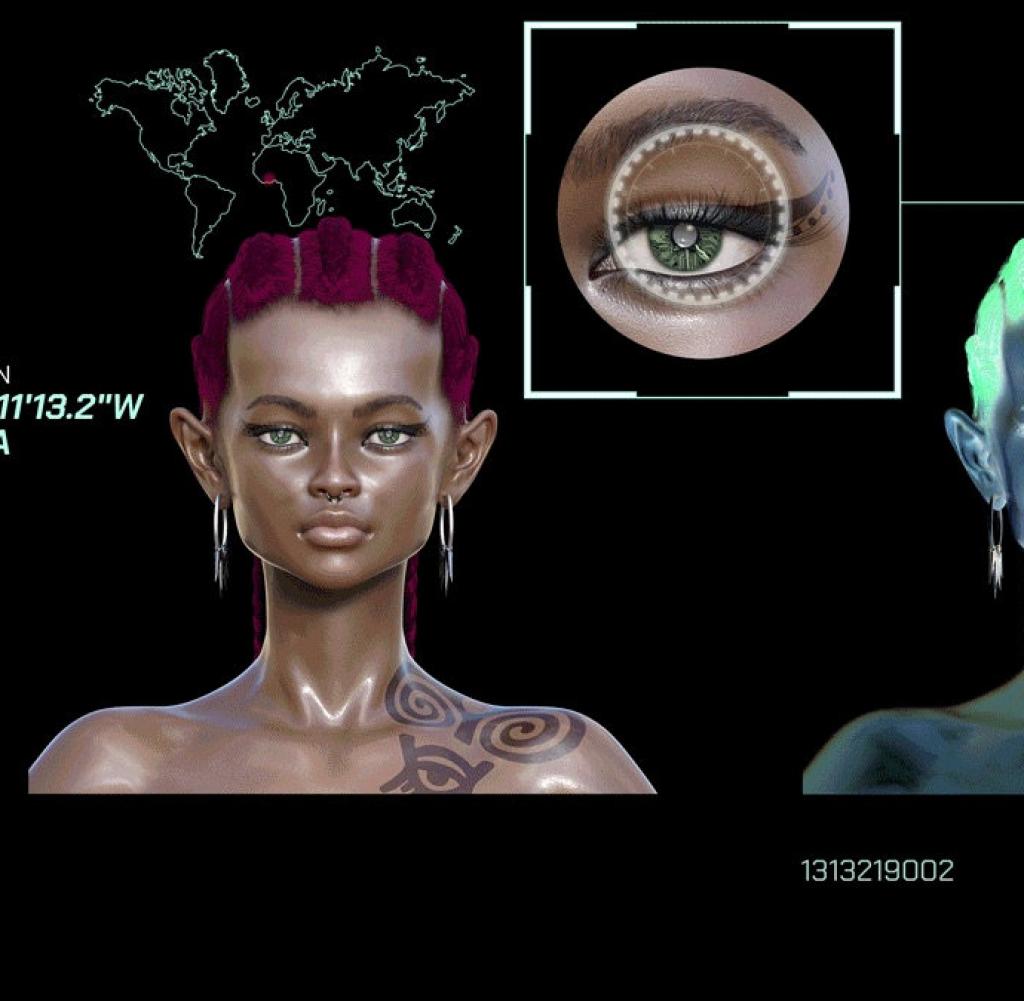 Is sci-Fi the new ideal of beauty?

It is particularly striking that the new digital models do not look as human-like as the pioneers Noonoouri or Lil Miquela, but stand out above all by extravagant looks with elf ears and futuristic tattoos. The looks are strongly reminiscent of a science fiction version of the video game heroine Lara Croft to fairy-like characters from the “Final Fantasy” series. These figures have already inspired the Louis Vuitton bag campaign, which has been one of the pioneers of digital models in its advertisements since 2016.

Last season, the “Alien Glamour” was already an unmistakable trend on the catwalk. The “matrix look” with narrow sunglasses and leather coats was also rediscovered in New York and metallic helmets were on display at Givenchy in Paris. As sensational as the sci-fi looks may be, Julia Falkner is nevertheless sure that normality will also remain in demand: “We will also include more human-like models in the portfolio,” she says about the agency’s growing index, in which artists have currently mainly realized themselves with extravagant designs.

In particular, the promotion of environmental awareness and sustainable production is an important argument for “Mutantboard”. “Virtual models don’t have to be flown all over the world to do their job. They also don’t have to wear real clothes to fashion shows and shootings,“ says Falkner about the technology of their agency, through which they convert the conventional 2D designs of the designers into 3D looks on the avatars. Used samples are usually thrown away after shootings, stage sets and setups of the big fashion shows are also expensive disposable designs.

Will avatars replace real models in the future?

Even if the demand for digital models is increasing and the legal situation will make fashion shows impossible in the coming months, Falkner is still sure that the fashion world will continue to be preserved offline as usual. “Our models will not replace the real models,” she says, but points out that with their agency they can react faster to the zeitgeist of society than conventional model agencies. “We’re launching another ‘genderless queer couple’ this week,” she says of her contribution to the LGBTQ community.

However, Falkner sees the new digitization above all as an important factor for the modernization of the outdated fashion weeks. “Gucci no longer wants to show in the usual fashion cycle, and London Fashion Week has also become more and more of a niche in recent years. We are building on these changes.” Lorena Hydeman’s main focus is on a very specific vision of her agency: “We want to create a world in which there are fewer prejudices than in the real world.“