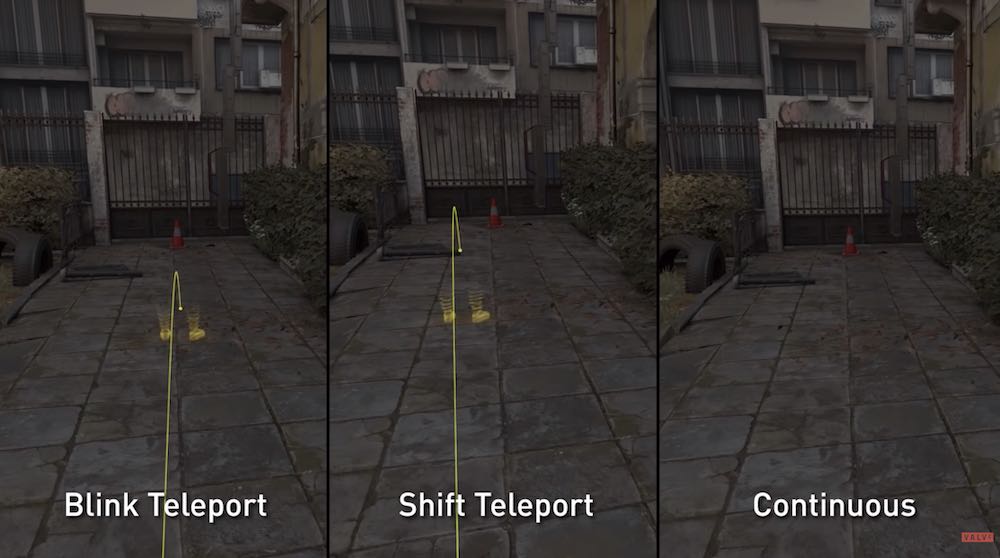 The movement in virtual reality is still a problem for developers. In your Valve video explains how VR locomotion was implemented in Half-Life: Alyx.

Game VR supports three types of artificial movements: smooth movement with one push of a button, as we know from the games on monitors, and two types of teleportation, called Blink (shift) and Shift (blinking).

If you teleport with a blink, the screen for a short time becomes black and the players appear in the destination. With interchangeable teleport, players move to their destination at high speed, and the screen does not become black. In this sense the Shift is a mix of teleport and smooth movement. Video Valve is mainly for flashing and offset.

Foot instead of circles

The development of these types of movements virtual reality began with the teleportation system of its own VR apps The Lab 2016. Here you choose a destination, using the abstract symbol of a circle.

For a realistic environment Half-Life: Alyx Valve used the more specific indicator, namely, digital legs. Because of this the players can better imagine where they will stand after the teleport and what place will occupy their bodies. This is especially important in combat, as you often have to hide behind objects.

If you choose the destination, the steps are also indicated. This helps the players to visualize your running route and allows them to understand why certain destinations cannot be selected.

Valve has developed its own system of evaluation of possible routes and directions. Thus always consider the full height of the player, which led to some problems.

If the tester was particularly high, could be that his head is faced with highly placed objects such as plumbing pipes in the way of teleportation. Result: the path shown is impossible as long as these players are not squatted. Valve has programmed the system so that it adopted the standard minimum body size to test such teleports.

Development of a reliable system of teleport

The purpose of the Valve was that the players showed confidence in the mechanics of the teleport. The developers at Valve are saying that it is important that the perception of the teleport line with expectations of the player, especially during intense battles.

Consequently, the system sets the priority of gender as a potential destination, not elevated spots, such as barrels and crates, and teleports the player closest to the destination, even if it was chosen incorrectly, for example because the player pointed out on the wall instead of the floor.

The perception of the virtual body

Another important element of VR movement is sound design. When players teleport in Half-Life: Alyx, they hear the sounds of movement from his alter ego and surfaces on which they walk. Thus it is assumed a physical presence.

The type and volume of the sounds expect the physical effects of virtual body, changing it depending on the distances and heights that players go through the teleport.

The developers claim that the three types of movement Half-Life: Alyx was influenced and inspired each other. Free movement influenced the development of teleportation and evaluation of their path, while the sound scheme developed for the mechanics of teleport, are reflected in free movement to make it more believable.

Want to know more about VR-masterpiece Valve? Then take a look at our guide to half-life: Alyx .