The HoloLens changes our view of the world

Florian Haspinger walks excitedly around an empty table,as if there were a sensation. The other people in the room see only a bare piece of furniture, but before the eyes of the start-up founder, the entire solar system is currently building up over a table. Microsoft’s HoloLens, which Haspinger wears on his head, provide a view of this additional virtual reality in the actual environment.

These cyberglasses can project holograms, multimedia content or information into the field of view. So their wearer does not completely immerse himself in virtual reality (VR), instead he experiences an augmented reality – just like the “Terminator” in the science fiction classic of the same name, who also received information about his environment via augmented reality (AR).

Of course, Florian Haspinger is not working on the world domination of robots, but on possible applications for the glasses from Microsoft. Haspinger is one of the first in Europe to own a HoloLens and is convinced: “This is the future.”But what can it look like? “Computer Bild” tried the $ 3000 developer version.

Without cables and PC

If you put on the glasses, you will see two-or three-dimensional projections. Depending on the application, these can be aggressive robots, a brand new car or the solar system.

In contrast to the previously common VR glasses, the HoloLens does not have to dock with a powerful PC via cable – instead, the entire technology is contained in the compact spectacle frame. The word “compact” is in the eye of the beholder: With its 580 grams, the HoloLens is not a lightweight.

But because the high weight is evenly distributed thanks to the additional headband, longer explorations of the AR are also possible. At the latest after two to three hours, however, is over, because then the battery needs fresh juice.

In front of the forehead sits a mini-PC in the frame, which forwards the AR content to two small displays. Which in turn transmit the image to four lenses, which project it onto both eyes. This compact design is also desired for VR glasses – without an” umbilical cord ” to a PC and further cable clutter, the experience is much more intense, the boundaries between reality and the illusion in the field of view quickly blur. 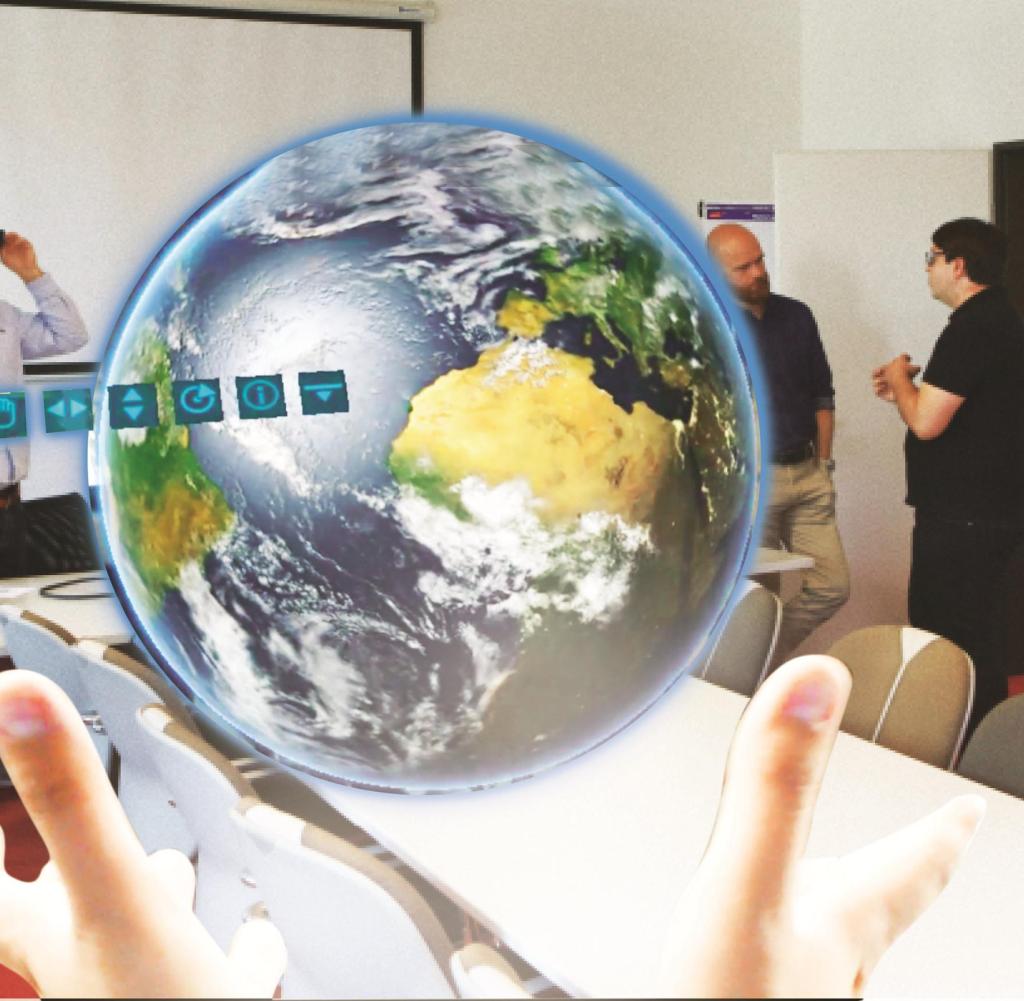 Florian Haspinger has meanwhile become intensively familiar with all the details of the Microsoft glasses, “but for a complete understanding, the doctor in physics is probably necessary,” says even the studied physicist. Incidentally, the technology is partly based on patents of the former mobile phone giant Nokia, whose mobile phone division Microsoft bought five years ago.

The fact that the HoloLens is based on Windows 10 brings a clear advantage:” When apps run there, they also work on the glasses, ” explains Haspinger. Then, however, not as an elaborately programmed 3-D image, instead the illusion sticks to the wall like a poster. 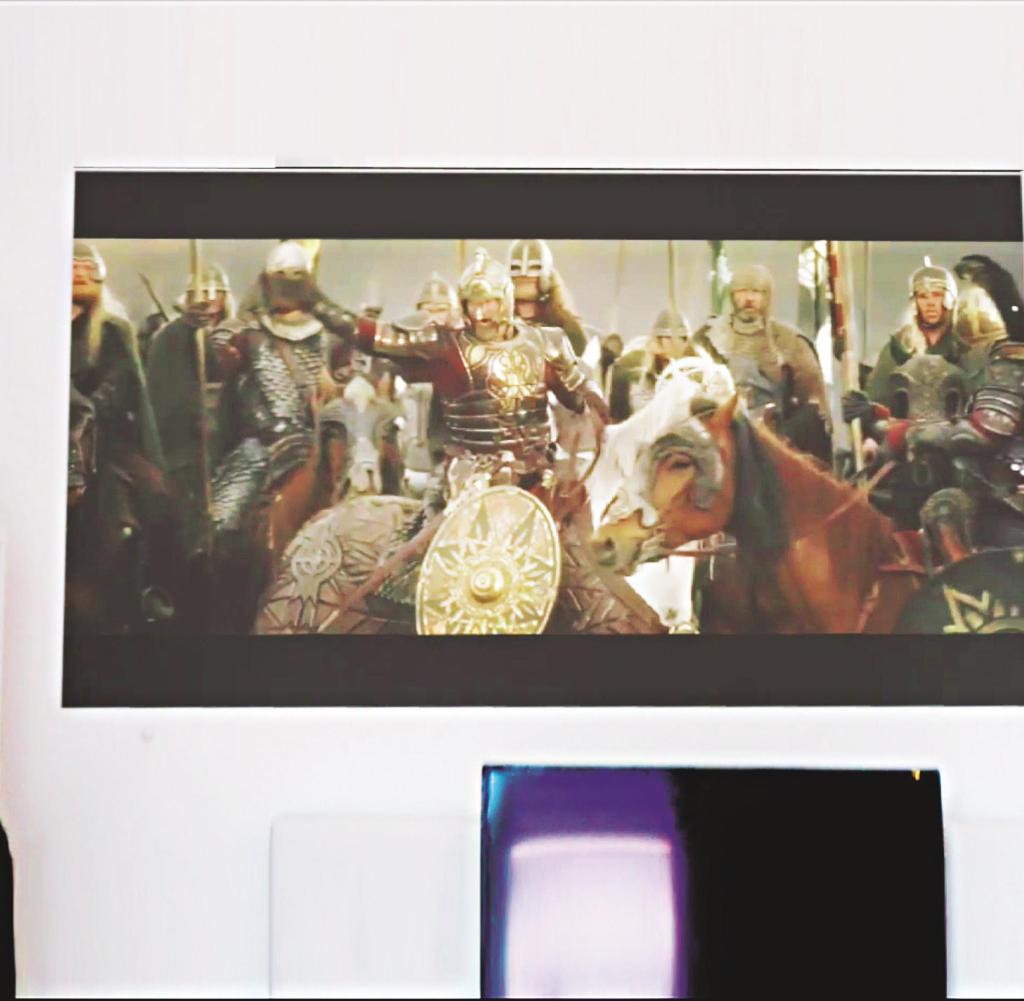 Even the first practical test showed the enormous potential of the HoloLens: For example, if the user watches a YouTube video and would like to see it larger, he can enlarge it with the appropriate head and finger movements-so the viewer perceives it like a video on a large screen. If he has fixed the image in this way, it remains in the same place even with rapid head movements.

So far, however, the control options are modest – in addition to the virtual right-click, which enlarges the image in the example, there is only a hand movement to open the menu and confirmation by head movement.

Another weak point of the developer version is its limited field of view – it is approximately the same as looking at a 55-inch TV from a distance of two meters. When the HoloLens comes on the market, it definitely needs a larger projection surface for its augmented reality.

In addition, the somewhat pale colors and transparent objects take some getting used to, especially in bright ambient light. In addition, some users perceive disturbing rainbow effects during rapid head movements. 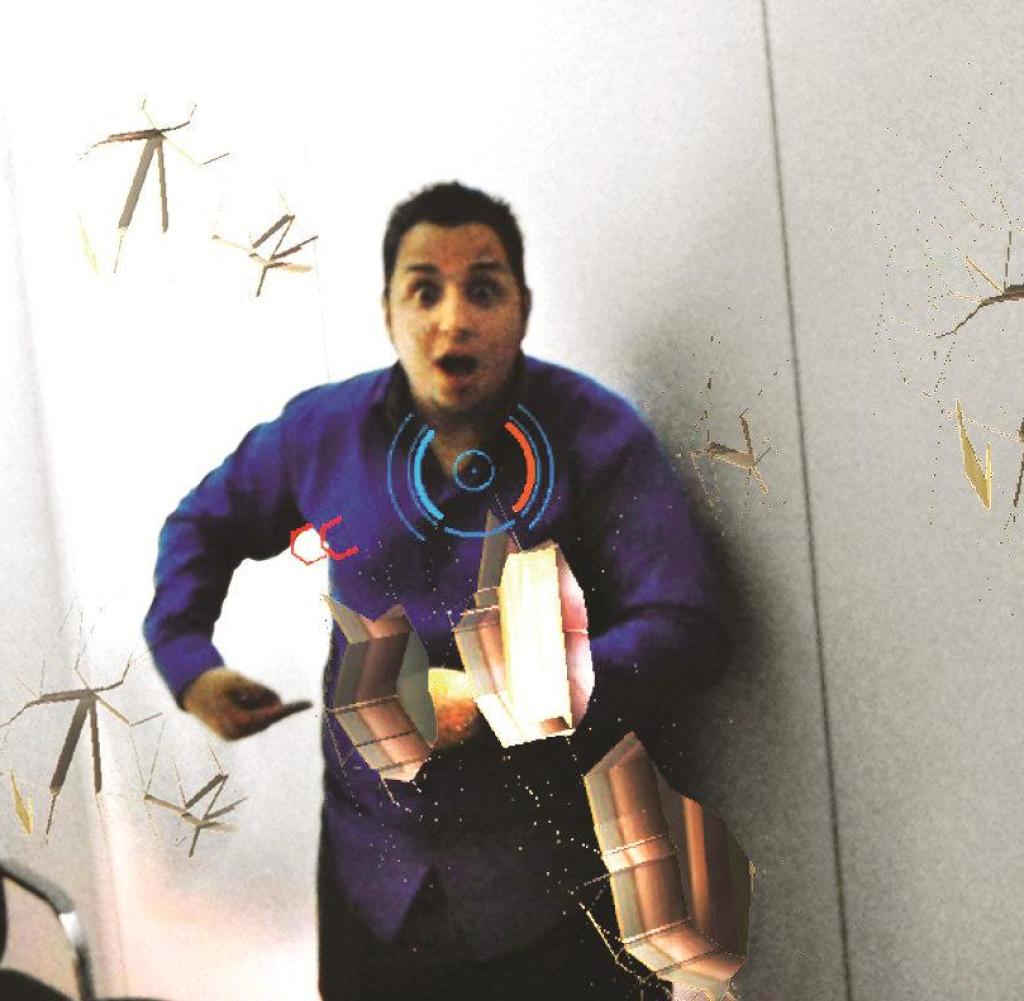 The display quality is already flawless, the two Full HD displays ensure a sharp image. Pixel grids or individual pixels are not visible at the high density of 40 pixels per inch – a Full HD TV with 55 inches has the same pixel density.

Whether as an entertainment medium, an additional eye in medicine or as a virtual cockpit in a networked car – the HoloLens has enormous potential. Especially since the tested apps already run mostly smoothly at up to 60 frames per second and therefore do not cause nausea.

However, it is still a long way to market maturity. Only when Microsoft offers a lighter model with a larger field of view at an affordable price, the HoloLens really belongs to the future.

How the HoloLens works

At the level of the forehead sits a small computer in the HoloLens. It has an Intel Atom processor with 1.04 gigahertz clock frequency, two gigabytes of memory and 64 gigabytes of storage space, making it comparable to an entry-level tablet. The fact that no jerks or delays are visible is also due to the software – on the HoloLens it runs on the basis of Windows 10.

Behind the tinted plastic visor sit four lenses. These glass panes cover with blue, red and green one of the primary colors, the fourth takes over the representation of the gray scale. When looking through the lens, the entire color palette is visible. 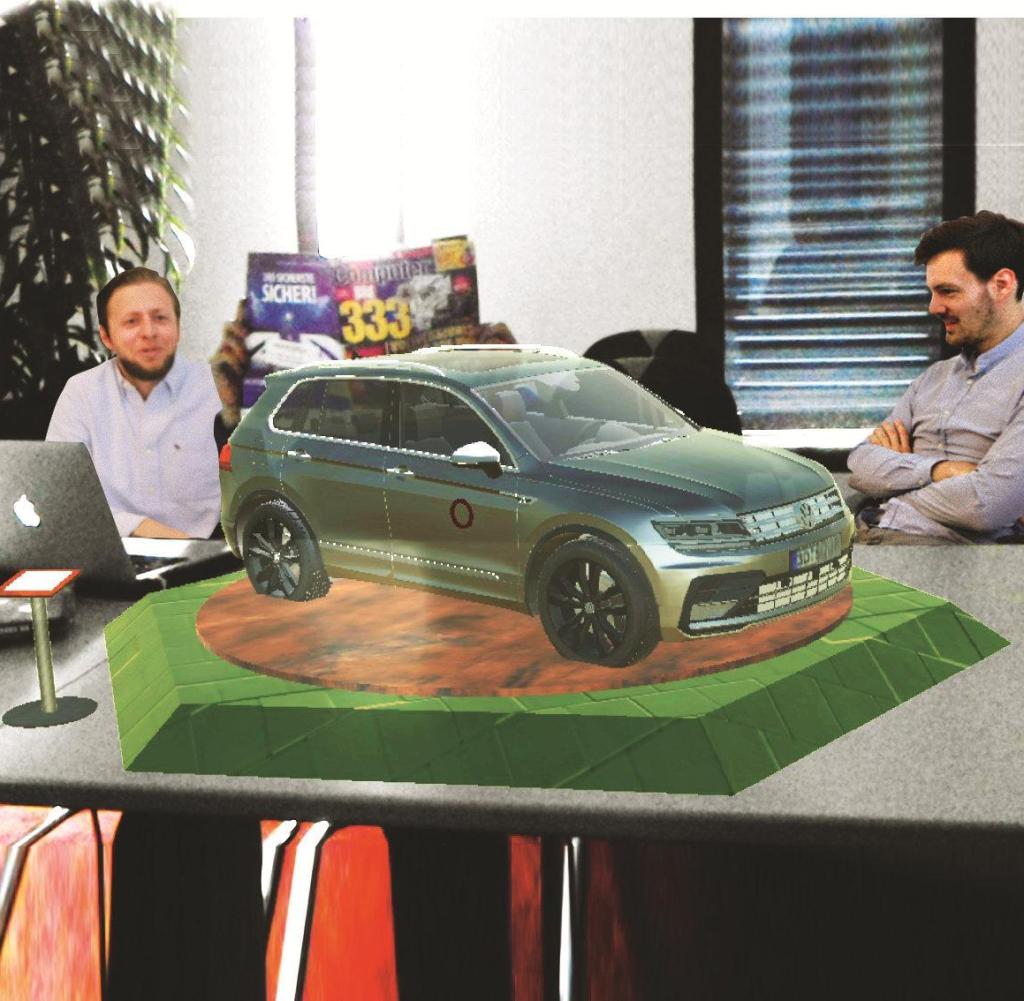 In order for a hologram to appear in the field of view, two small Full HD displays transmit the image content to the lenses. Thus, the image remains sharp, but the field of view is quite small. In addition, the colors should be strong until the market launch.

The HoloLens detects the user’s position and movements so quickly that there are no delays. In addition to the position sensors known from the smartphone, five cameras ensure this. The front camera measures the space and thus determines the possible image depth. The four external cameras film the environment and help the user to orientate in space. A two-megapixel camera transmits the signal to the computer in real time or records it.

With the rotary wheel on the back of the head holder, the user can adjust the HoloLens to his head shape. An extra headband provides extra support. This is important, because with a bad fit, the image section is significantly reduced. 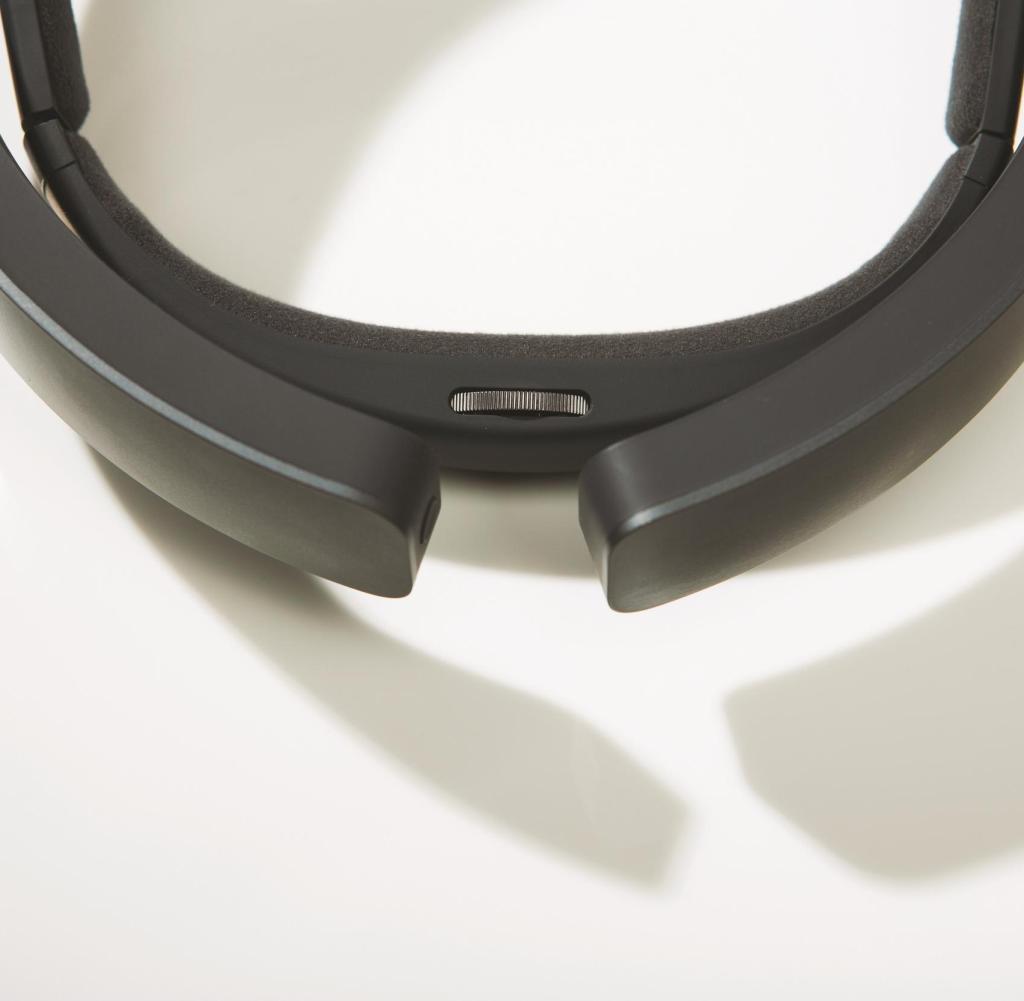 The two loudspeakers sit above the ears. They do not lie directly on, but are open downwards. Thus, depending on the position, spatial acoustics and good sound are created, which enhance the AR effect. From the outside, the sounds are barely audible.

Behind the speakers are small batteries on both sides. They allow wireless operation for two to three hours. If WLAN and Bluetooth are activated, the runtime is shortened. Thanks to the microUSB connection, battery packs can significantly increase endurance. 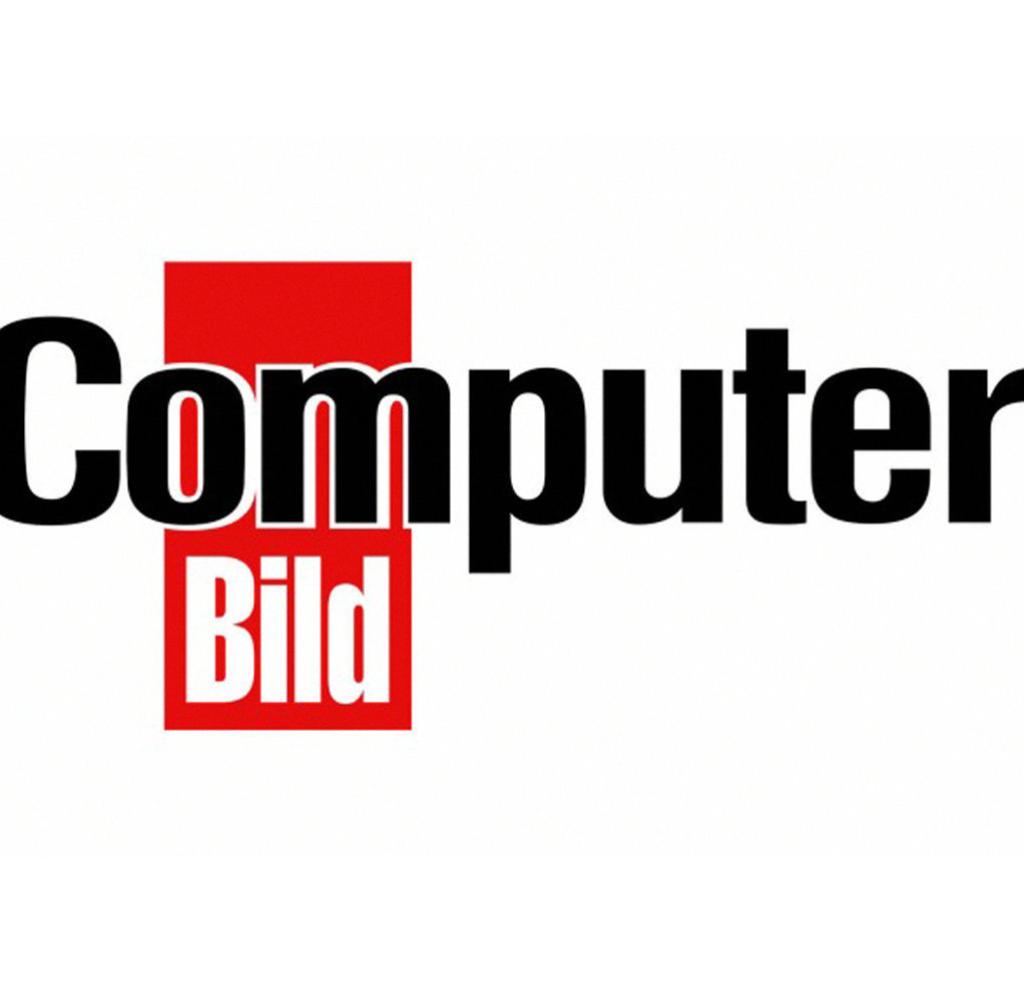