The dominant directions of artificial intelligence in 2019


The analytical company CB Insight has decomposed AI technologies according to the NExTT matrix, the horizontal axis of which reflects the level of market power, and the vertical axis — the degree of penetration.


The Industry Adoption parameter, which indicates the degree of use of the technology by the market, is estimated by analysts by studying the number of startups in a particular niche, media attention to the topic, the breadth of application (partnerships, customers, licensing deals). Market Strength, as understood by CB Insight, is determined by the size of the market in analysts ‘ forecasts, the quality and quantity of investors and capital in a given area, the size of R&D financing, earned revenue, the level of competition, competent transactions (M&A, strategic investments). In the upper right quadrant of 2019, there were five technologies: open platforms for artificial intelligence, Edge computing, facial recognition, medical image analysis and diagnostics, predictive analytics. We will focus in detail on the three most actively spreading technologies.


The figure below shows that open source platforms have the greatest market strength and the level of market penetration. As CB Insight analysts explain, the spread of such products has significantly lowered the entry barriers for using AI. The beginning of this process was laid by the appearance in 2015 of the open software library for machine learning TensorFlow by Google. This trend has two main consequences: the availability of AI for any company, as well as additional benefits that corporations such as Google receive thanks to the activity of a community of contributors who help develop AI capabilities and speed up research.

Hundreds of people participate in the development of TensorFlow, posting their work on GitHub (a collaborative platform for developers).


Facebook released Caffe2 in 2017 after working for a long time together with researchers from NVidia, Qualcomm, Intel, Microsoft and others to create a “lightweight modular framework for deep learning” that can be used outside the cloud in mobile applications. Facebook also launched PyTorch, an open machine learning platform for Python, and in May 2018 combined both of these solutions under one umbrella brand. The number of PyTorch contributors on GitHub has increased significantly in recent months.


Theano is another open library from the Montreal Institute for Learning Algorithms (MILA). In September 2017, a leading AI scientist, Yoshua Bengio, announced the termination of the development of Theano from MILA, because other similar tools have become widespread. Among them are KEras, Microsoft Cognitive Toolkit, Apache MXNet.


The essence of this technology is that resource-intensive calculations are carried out not on remote servers somewhere in the cloud, but directly on the end device. This can be a smartphone, laptop, or even a “smart” meter, a connected drilling rig, a car, and so on. According to CB Insights, the demand for these technologies is growing along with the demand for real-time decision-making systems. The closer the calculation is to the user (and this may be not only and not so much a person as a machine, robot or other software system), the faster he can get the necessary hints for making a decision.


NVidia, Qualcomm and Apple, as well as a number of startups, are focused exclusively on creating chipsets for performing calculations of AI algorithms “on the edge”, that is, on end devices. These technologies will have an impact on all major industries, from consumer electronics to telecommunications and medical imaging.


For example, autonomous cars should respond to the situation on the road instantly, even where there is no Internet connection. The speed of decision-making is critical, the delay can become fatal.

Large companies invested heavily in edge-AI in 2017-2018. In 2017, Apple released its A11 chip with a “neural engine” for the iPhone 8, iPhone 8 Plus and iPhone X, saying that it is capable of performing 600 billion machine learning operations per second. It performs calculations for such functions as Face ID — face recognition for unlocking the device and confirming payments.


Qualcomm launched a $100 million fund in the fourth quarter of 2018 to invest in startups “that share our vision that AI computing on end devices is gaining strength and is becoming more widespread.” This move is also consistent with the company’s belief in 5G.


Intel, as the dominant manufacturer of processors used in most data centers, is forced to play the role of catching up, trying to reduce the gap from the leaders through strategic acquisitions. The company released the Myriad X chip, which was developed by the Movidius team, bought out by Intel in 2016. The chip is designed for computing on end devices. In the fourth quarter of 2018, the company announced Intel NCS2 (Neural Compute Stick 2) based on Myriad X to launch applications based on computer vision technologies on end devices such as smartphones and industrial robots.


In the third quarter of 2018, Microsoft announced that it had launched hundreds of new features for Azure, “focused on existing tasks, such as cybersecurity, and on new ones — the Internet of Things and edge-AI”.


NVidia in early 2019 released Jetson AGX Xavier, a chip for computing on end devices to run applications that control robots or implement the functionality of the industrial “Internet of Things”.

& #13;
AI running on end devices allows you to reduce delays, but this technology has its drawbacks: unlike the cloud, storage space and computing power are limited. CB Insights predicts that hybrid models will be in demand, which will make it possible for devices to interact with each other and with a central server.


The technology is becoming mainstream and is used everywhere: from unlocking the phone to boarding the flight.


In this area, China has completely captured the media field with its announcements of total video surveillance programs and ambitions in the field of AI. 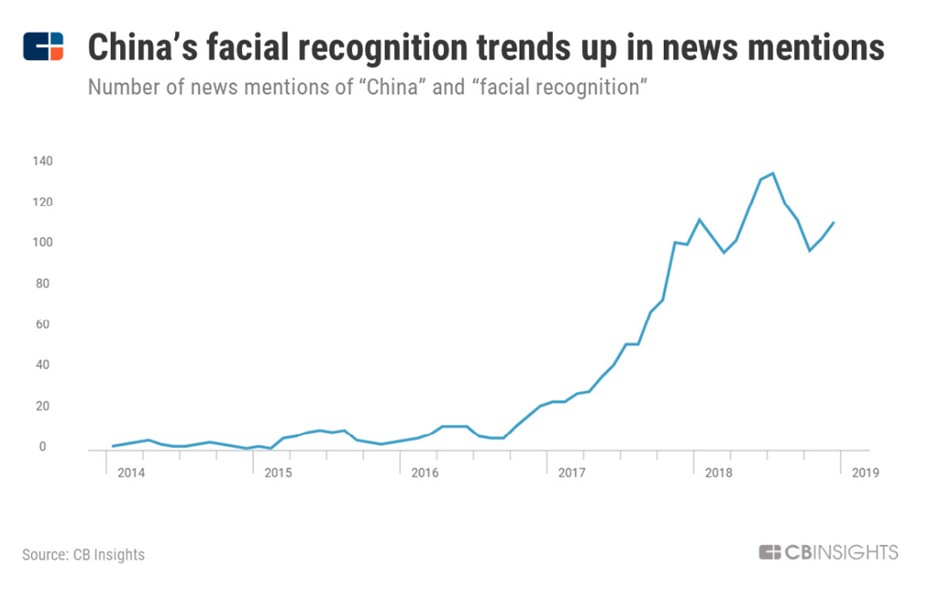 Following the demand from the state, startups are trying to offer their solutions as components of AI-based surveillance systems. In China, a huge number of young companies are creating products in the field of facial recognition. Among them are “unicorns”: SenseTime, Face++, CloudWalk.


But even in the United States, there is an increased interest in such projects. CB Insights, using its patent search and analysis tool, has compiled the following picture of research and development of American companies in this area. 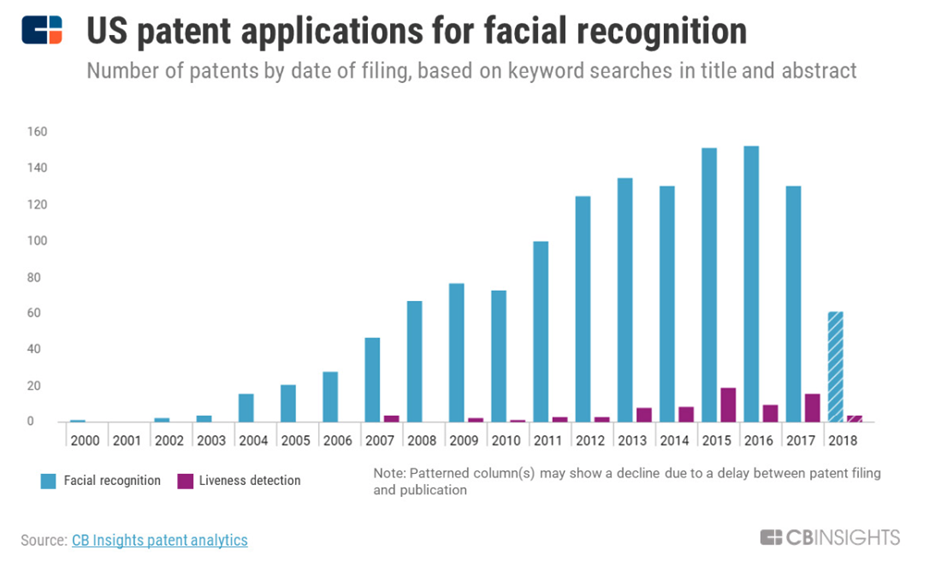 Apple popularized this technology for consumers and made it everyday when it released the 10th version of its operating system.


Academic institutions such as Carnegie Mellon University are also working on the technology, seeking to develop video surveillance capabilities. The university has applied for a patent for “hallucinating facial features” — a method that allows law enforcement agencies to identify people in masks by reconstructing the entire face only by a small piece. After that, the recreated “hallucinating face” is checked against the database of suspects to find the strongest correlation.


But this technology is not without a flaw. Amazon recently got into the news when it mistook several well-known congressmen for criminals. A WSJ reporter easily fooled the “smart” cameras around a school in Seattle, using a photo of the school principal to get inside. After that, the “smile to open” function was temporarily disabled.


Such functions allow you to add an additional layer of authentication. For example, Amazon has applied for a patent that covers additional levels of security, including a request to perform certain actions: smile, blink, tilt your head. This method can be supported by the installation of infrared cameras, a database of temperature images, and other things for more reliable authentication.


The commercial applications that are now emerging are mainly created for security, retail and consumer electronics, and facial recognition is quickly becoming the dominant method of authentication.


The full version of the report can be downloaded here.