Take photos with high-tech instead of taking pictures with smartphones

Now it happens. Now. And now again. Several times even. Thousandfold. Somewhere in the world at that moment a photo was taken. An incredible 1.138 trillion images will be taken by people this year, reports the Photo Industry Association (PIV) with reference to a study by Infotrend.

That’s 36,086 photos per second. And this number should continue to rise sharply. “Images are the new universal language,” explains Rainer Führes, Chairman of the Board of PIV and also head of Germany for the Japanese industry giant Canon, in the run-up to the world’s largest industry trade fair Photokina in Cologne. “Today, images no longer serve only as memories, they are communicated with.“

In fact, around 350 million photos land on Facebook, 95 million on Instagram and 400 million on Snapchat every day. In addition, 1.6 billion images go around the world via the messenger service WhatsApp, as a study by Brandwatch shows. The majority of these images come from a smartphone. It is estimated that around 80 percent of all photos are now taken with mobile phones.

Sales of classic cameras are on the decline

Classic cameras, on the other hand, play only a minor role in the global photo market. This can also be seen in the statistics. In Germany, for example, one of the most important photo markets worldwide, sales of SLR, system and compact cameras have been declining for several years. Since 2012, the number of units has already more than halved to an expected 3.46 million in the current year, reports the PIV with reference to figures from market researchers from the GfK Group. in 2016 alone, the decline was 13 percent.

The industry is therefore in a dilemma: photography is more popular than ever before. However, the manufacturers of cameras, lenses, flash units and photo bags can hardly benefit from this.

However, PIV leader Führes is far from worried. On the contrary, he even speaks of “huge growth opportunities” for the industry, which has been shrinking for years. “Statistics collected according to conventional criteria fail to recognize the changing market situation,” complains the manager about the one-dimensional view of sales figures from his point of view. “We already knew before the boom with smartphones that the large number of discontinued cameras could not be sustained over the years,” says Führes. In the future, he wants his industry to be understood as an “imaging”industry rather than a photo industry. “Because the associated ecosystem is growing in breadth and creating new segments of enormous added value.“

Führes mentions, for example, virtual reality, augmented reality, but above all apps and cloud solutions, whose sales are growing rapidly. After all, apps from the field of photo and video brought in 41 billion dollars last year, according to experts, digital data archiving on the Net should even turn over 200 billion dollars by the end of 2016.

The photo world is once again in the midst of an epochal upheaval. So far, the transformation from analog to digital has been regarded as a major challenge for the traditional industry. Especially since a number of companies have fallen by the wayside, including prominent providers such as Agfa. Now the industry has to change again: from the digital to a smart imaging world. This is intended to conquer new markets in the coming years.

“Imaging technology is indispensable in many intelligent solutions, “says Führes – and raves about” previously unimagined dimensions in development and sales opportunities ” for his industry, for example in security technology, robotics, the automotive sector or even in medical technology and in the connected home, the so – called smart home. This also includes entering into cross-industry cooperation. “Our sphere of activity has become much more far-reaching and is no longer limited to the end consumer.“

However, the consumer should not be forgotten. In the future, however, the focus will not be on 08/15 compact cameras for everyone. Finally, recordings of this quality can also be made with the smartphone. Instead, the industry is focusing on concepts that offer added value compared to the mobile phone camera in your pocket.

“Smartphones are for notes, with a camera you write a letter or a story,” PIV representative Führes tries to illustrate. In other words: the smartphone is for beginners. But if you want more than a snapshot and a selfie, you have to buy a real camera. “The smartphone is therefore not a competitive product,” says Führes, who, according to his own statement, takes a lot of pictures with his mobile phone. Instead, it always introduces new target groups to photography.

And the industry is now coming up with a lot for them. For example, “smart” cameras that are Wi-Fi-enabled and can thus send images all over the world like a mobile phone or communicate via radio transmission with a TV, a printer or a beamer.

Already 40 percent of the commercially available devices are now equipped accordingly, reports GfK, whose experts see great potential for devices with “the highest image quality, networking, handiness and high-quality product design”, as stated in a recent industry report on the occasion of the launch of Photokina, to which around 1000 exhibitors and 180,000 visitors are expected by Sunday.

The second growth area in the otherwise shrinking camera market are so-called action cams, for example for sporting use. Around 570,000 units were sold last year, with 100,000 more expected in 2016. 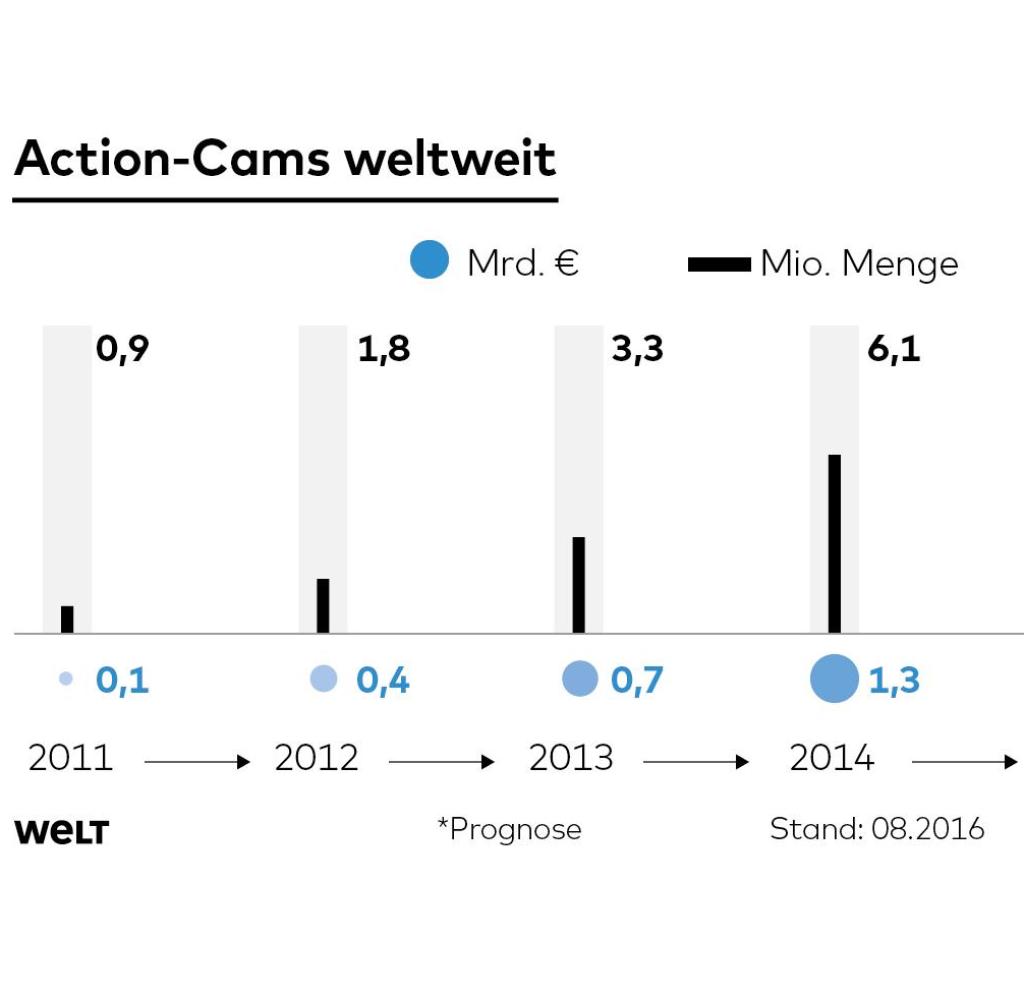 And camera drones are also a future market with huge potential, GfK predicts. At least 561 models for commercial or civil use are now available, reports the manufacturers ‘ association UVS International. According to GfK, more than ten million so-called multicopters will be sold worldwide this year, which corresponds to a growth of 150 percent. And this is just the beginning. “Despite the existing hype, this product category is only at the beginning of its life cycle,” says the PIV in its current trend report.

The same should apply to Virtual Reality (VR). “A new, fascinating image genre is currently establishing itself with VR-capable all-round shots,” says association head Führes, pointing to the possibility of 360-degree shots of mountain peaks, flowering gardens or in the middle of high-rise buildings.

At the same time, he expects that body cams and dash cams, which are used today in police operations on the body or in the car, will also establish themselves in the private sector in the future. Or in football. “Ronaldo then wears a camera in his jersey and we can see a game from the striker’s perspective.“

It is now up to the consumer to use the new techniques and, above all, to buy in order to lift the industry out of the crisis. The new areas are still unable to compensate for the continuing losses in the classic camera market, reports Willy Fischel, the managing director of the Bundesverband Technik im Einzelhandel (BVT). However, he is counting on a successful further development of the previous concepts and assures the industry of the appropriate patience.

Especially since it is visible that something is moving. In any case, the local manufacturers ‘ association PIV has missed a new brand image, a new strategy including a start-up initiative and a new logo. “We have learned,” assures Führes.