Vuzix positions itself as a developer of its own augmented reality glasses and an OEM manufacturer of devices of this class. A year ago, the company showed a fun novelty and the company’s shares jumped, but now they are on the decline. If you are wondering how they are doing, then here is the state at the end of the year. And here’s another interesting fact – 30% of the company was bought by Intel Corporation, but Vuzix does not use their accelerators and computing devices in its products. Perhaps this is all that is worth knowing about the creators of the device.

What is the M400? (Motivation, market, appearance)

The Vuzix M400 is not a classic augmented reality glasses, there are no so-called see-through optics. The device is a wearable display and falls under the class of smart glasses. The project was first presented at MWC 2019 in Barcelona as one of the first developments on the Qualcomm XR1 chip, which in turn was created specifically for use in the field of AR and VR (this follows from the name). In the autumn of the same year, the device hit the market.

Moreover, the developer deliberately did not make the mistake that Google made with their first version of Google Glass in 2013, releasing the device in the B2C segment. Google positioned glasses as a gadget for a smartphone and did not guess (but surprised everyone), too much ahead of the time of technology development (this is from a hobby, for example, the Google Tango project). The main market for the M400 is enterprise solutions for large and medium-sized businesses, that is, the corporate sector.

And there are not many competitors here, to put it mildly. Many developments are either too expensive to implement, or fail at the prototype stage. Nevertheless, to show what a miracle bird our device is, I will compare it with Google Glass Enterprise Edition 2 and RealWear HMT-1Z1HMT-1. To the point – pay attention to the table. 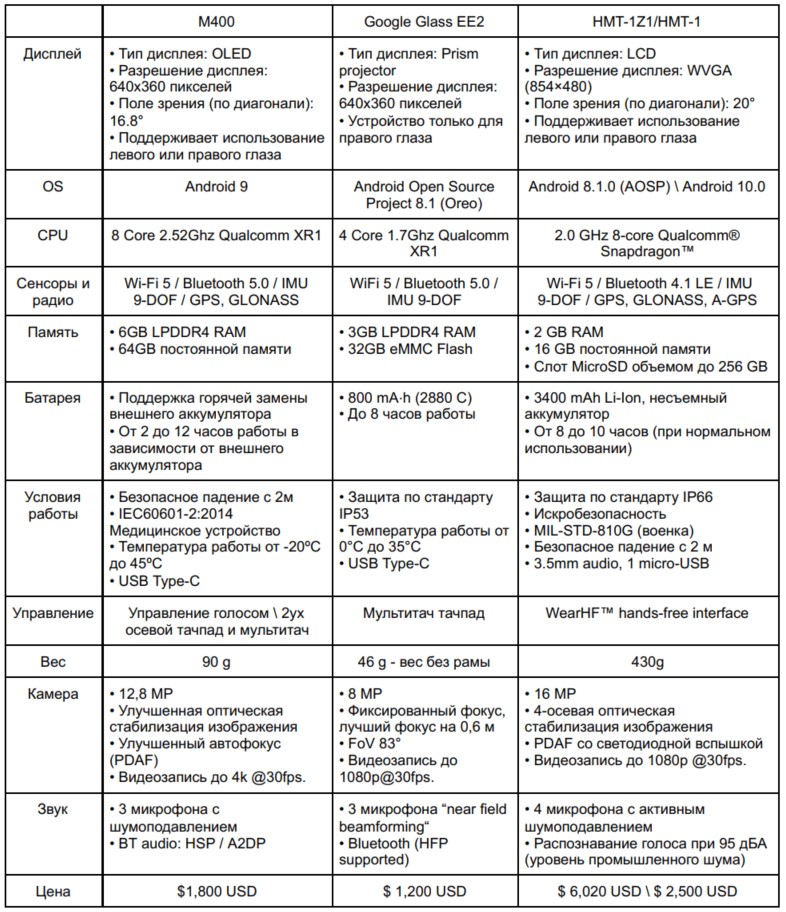 A lot of letters and numbers, I understand. A few main conclusions for me personally:

All of the above functionality gives the device extraordinary superpowers. Moreover, it is immediately clear that HMT-1 is strictly an industrial headset, and Google Glass EE 2 is quite the opposite (the device should not be used even in the rain). Our device is strictly and proudly in the middle. This gives him the opportunity to work in the conditions of most enterprises, medical institutions, outdoors and even at subzero temperatures, and the technology of display production guarantees stable operation for several years.

Personally, I’m missing only one cherry on the cake – a SIM card. Having a radio module directly in the device, autonomy would be at its height. And this cherry can be added, there are the following solutions:

Unless the latter option can be offered to customers. But immediately the load on logistics begins, several suppliers, difficulties in operation for end users, and in the end, the more equipment works in this kind of tandem, the more it has to be repaired and maintained.The crutches are growing, business is grumbling, projects are being curtailed. But it’s still not worth chasing, in the vast majority of cases you can distribute WiFi and live a better life.

The glasses arrived from the US states in just 2 weeks. From the pieces of paper in it, the user manual, the instruction for the battery, the warranty and the instructions for a quick connection to WiFi. The glasses themselves came in a black leather case. Separately inside the case is a frame, an energy bank, the smart module itself and two cords. The photo shoot is below under the spoiler. 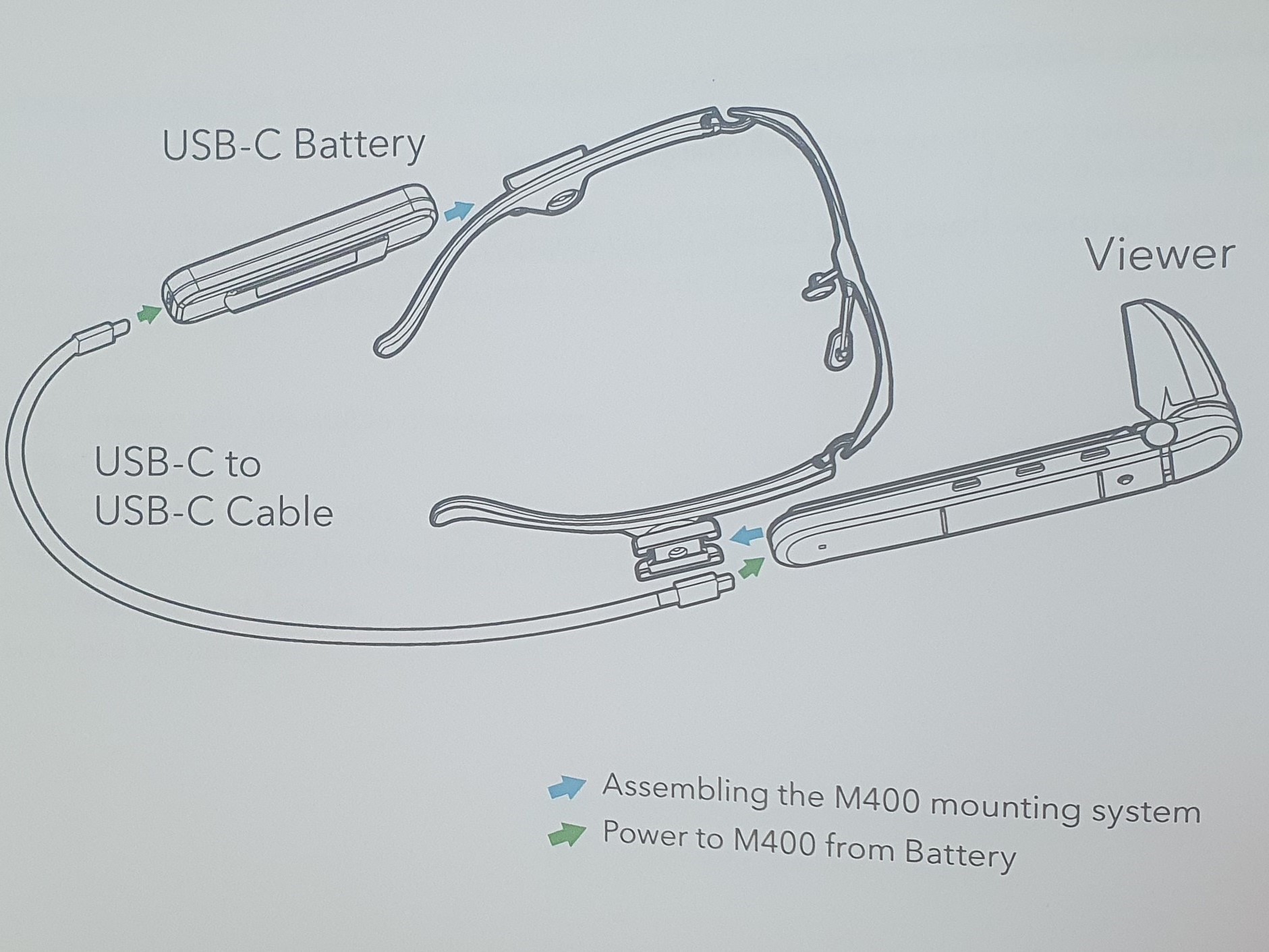 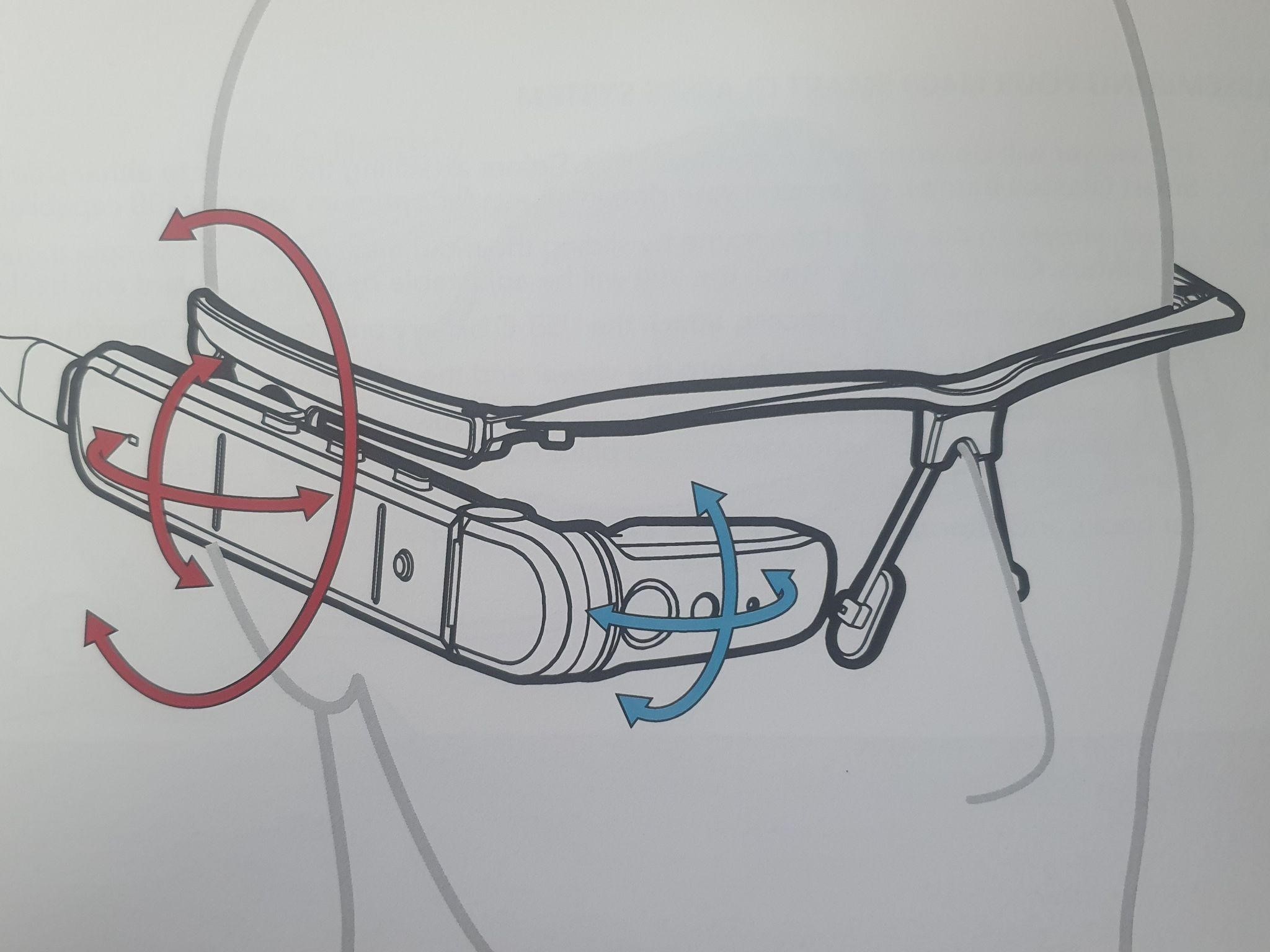 As can be seen from the cuts of the user manual pages – the glasses are designed in such a way that they will suit even those who already have glasses for vision correction (I am like that myself). This expands the possible list of subject areas where such devices can be used. But even if something goes wrong – Vuzix separately provides other types of fasteners. 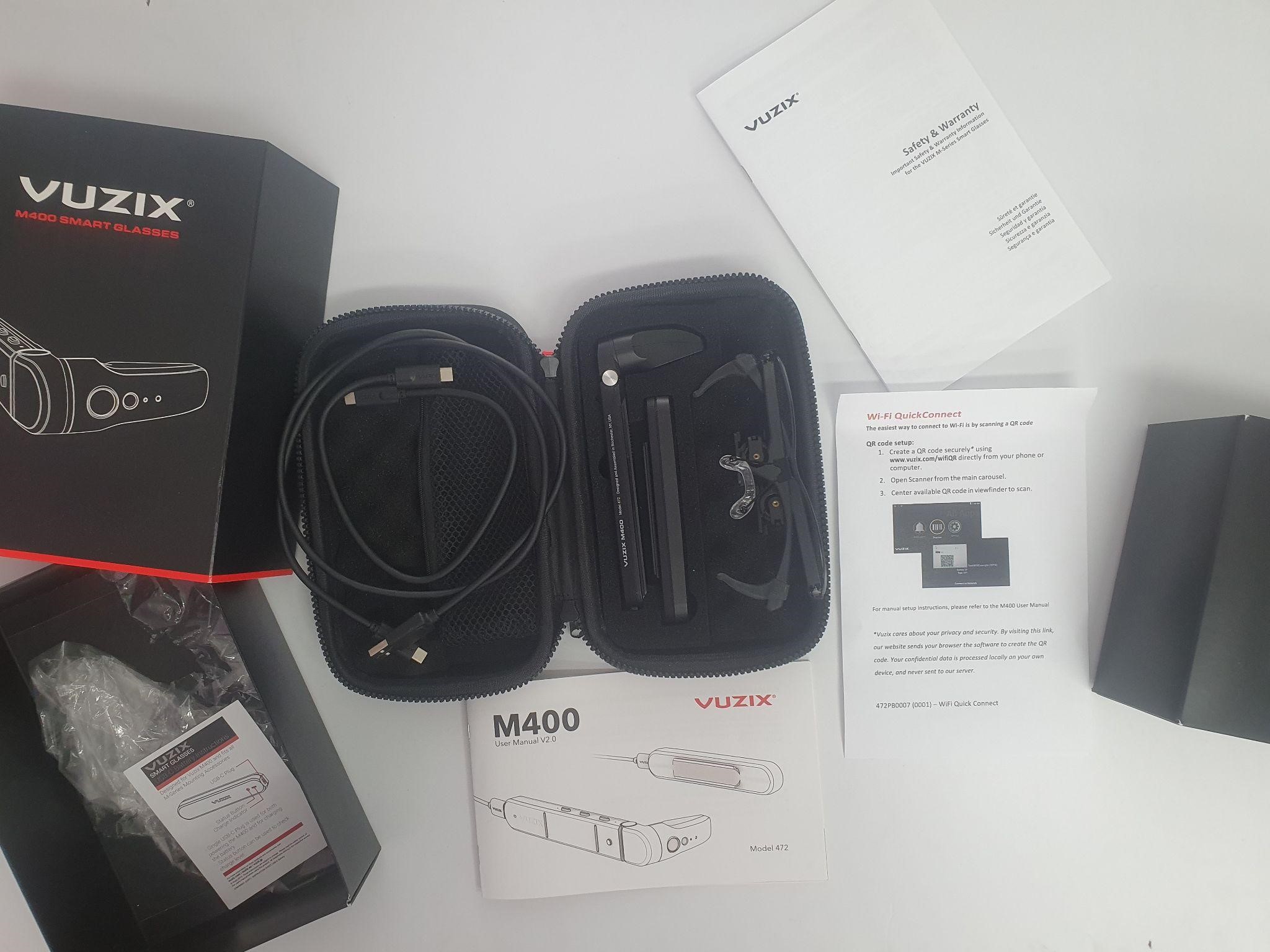 It’s funny that the battery came to us defective. We wrote to Vuzix and after some negotiations they decided to send us a replacement. But when they found out that the delivery needed to be arranged to Mother Russia, a bummer happened. Vuzix does not have a legal opportunity to do this. Sanctions, comrades. We organized the delivery of a set of glasses through a third-party service, the cost of which is about $ 200. And to replace a small part, alas, the price is no less. And you can’t check everything. The package is sealed and the delivery will definitely not agree to open it. Such is the incident. 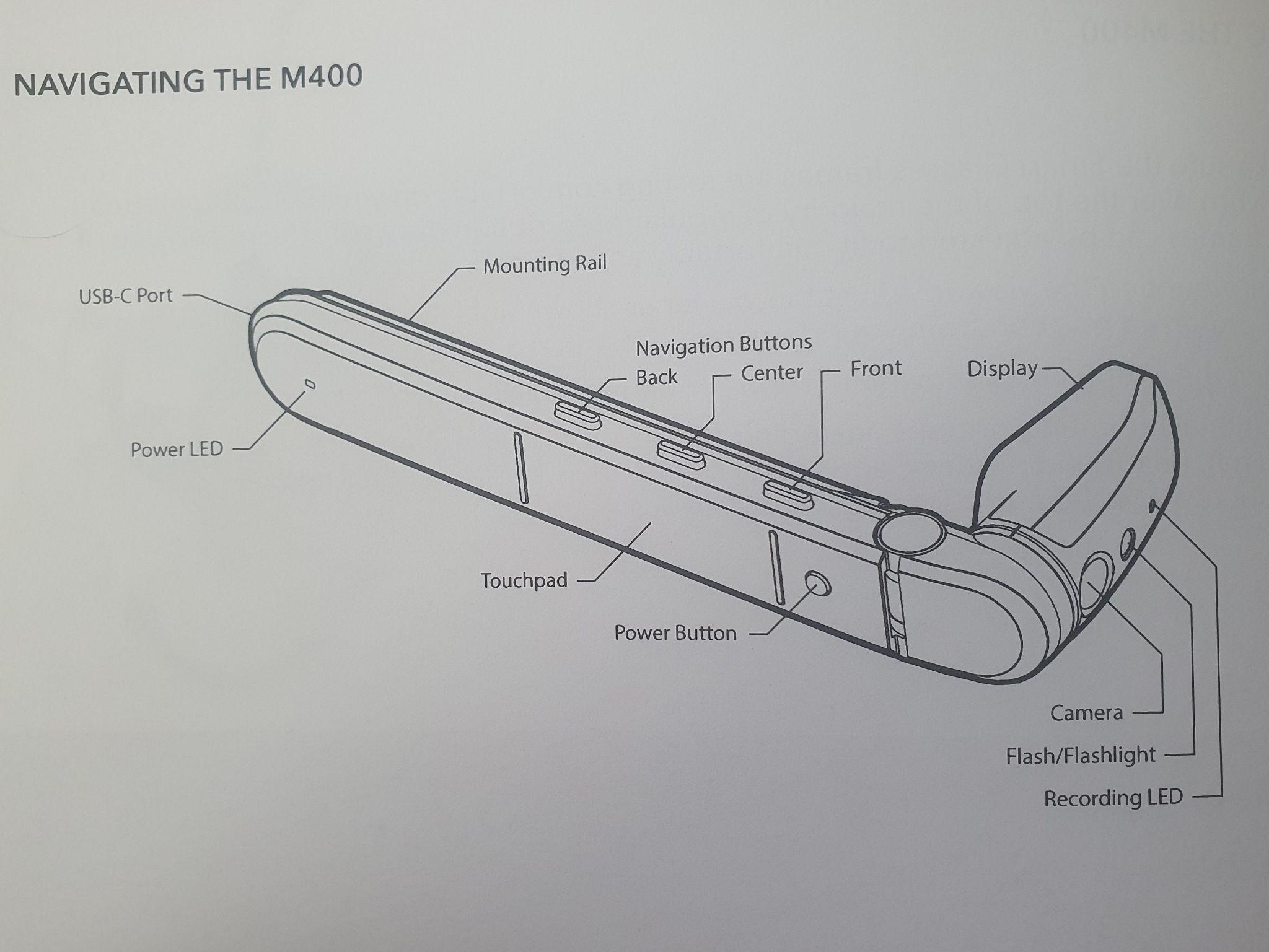 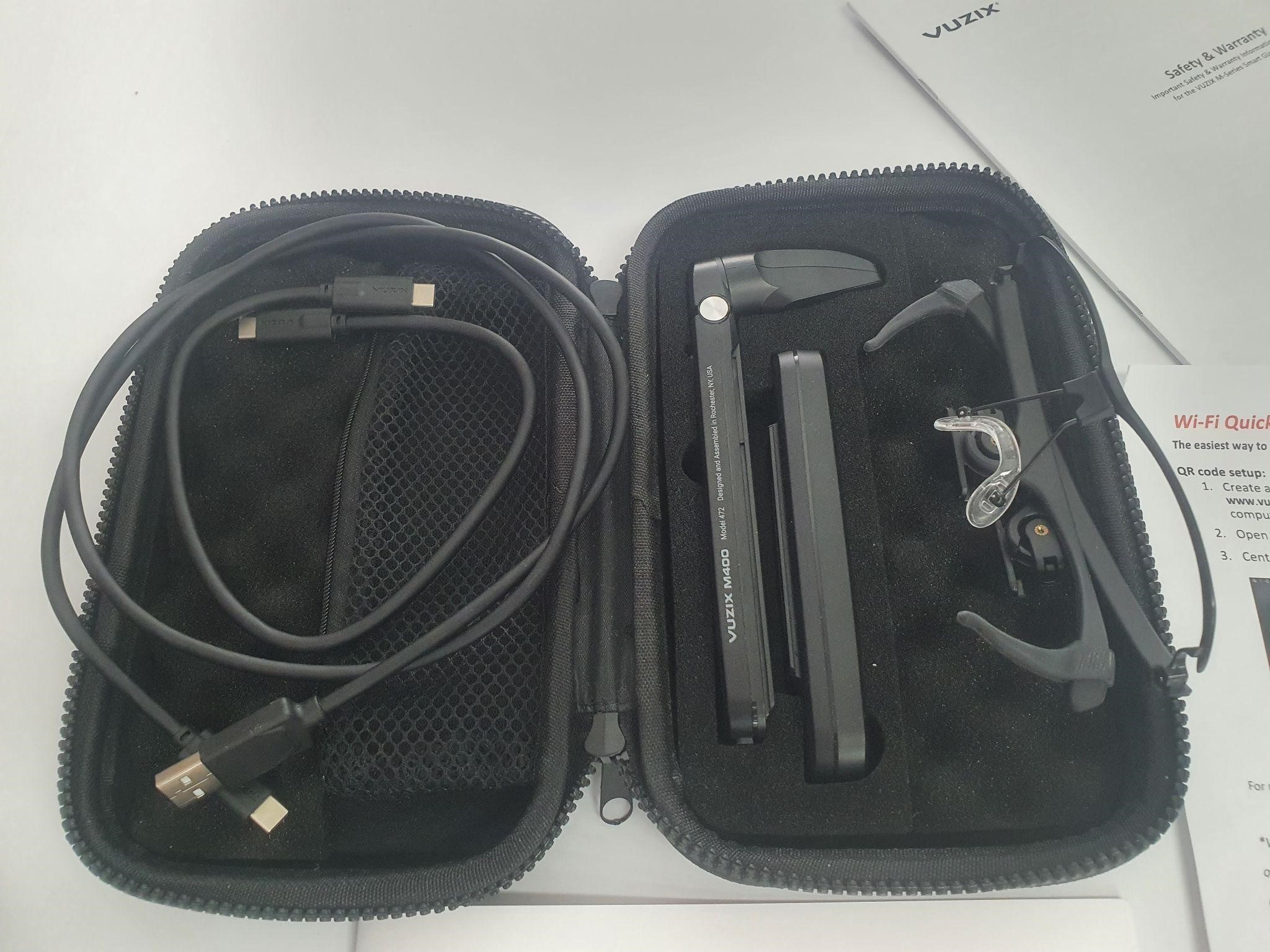 For comfortable interaction with the device, the developer company has developed the Vuzix View program for Windows and macOS. In fact, this is a remote desktop via USB. With the help of this little program, it turns out to be much more convenient and faster to work with glasses. You can find it on the official website.

And also Vuzix released a mobile application “Companion”. It helps in working with the device when you can’t find a PC nearby. The application has an Input tab, which allows you to use the touchpad of a mobile phone as a touchpad for glasses, which increases the speed of working with glasses at times. You can also access the file system through the application, but it works every other time and with a creak.

There is only one battery, but this is not a problem. Any battery that provides 7.5 watts of power is suitable for glasses. Almost any modern PowerBank is capable of this. When choosing, just pay attention to the fact that there is a port for the current output equal to 2 amperes.

It’s not obvious, but the glasses have flaws. The saddest problem is that the frame of the glasses in the standard configuration will not suit everyone. Because of this, discomfort appears when wearing the device for a long time (longer than 6 hours). There are two solutions here. The first is to buy another mount from Vuzix. It is extremely inconvenient to do this in Russia. The second is to make the mount yourself, which our company eventually did.

And also during the development of the software, testing was conducted with the participation of real users, during which it became clear that about 40% of users have vision problems, namely, to one degree or another pronounced farsightedness. Usually, these are people over 30 years old. The solution, alas, was simple – we increased the display elements at times, after which there was no room left on the screen for additional information. I had to leave only the necessary one.

We conducted experiments on wearing glasses for the left eye. It is not completely clear why, but the overwhelming number of users was absolutely uncomfortable and unusual to wear the device in this way. The problems started after what time of work with glasses. There were no successful attempts. As a result, we decided that we would use the device only for the right eye.

About the processor. If the profiler shows you the CPU load is not higher than 40, you should not worry. If you need to load your computer with a larger amount of work on an ongoing basis, then you will immediately feel it. Firstly, the device will start to overheat. Therefore, if you operate the glasses in a cool place, everything will be fine, but in a warm room, the passive cooling system of the glasses will not cope and soon the processor will start skipping clock cycles, in other words, trotting.

About the device’s camera. Here we must first ask – what tasks are assigned to the camera in devices of this type? The main area of application is scanning of any codes. Codes should be read as quickly as possible and preferably from a long distance. At the same time, it must be understood that a person is a living being and constantly turns his head. For a good result, it is required that the camera can get a new image in minimal time (then we will not catch motion blur and the scan will be successful). In reality, with standard camera settings, you need to “freeze” to scan, for example, a QR code. To achieve the best result, you need to configure the camera directly for the task and the lack of support for 60FPS does not make the task easier.

About the management interface. We didn’t even try to fully instruct the user what each button on the device is responsible for. It is inconvenient to use the buttons. Typing words on the built-in keyboard is a natural torture. We have implemented voice control for our solution. It is complete and sufficient to solve real problems. Microphones do a good job of noise suppression even in noisy production environments where we use this device.

Nevertheless, despite the above problems, users liked the device and it successfully solves its tasks.