Radio supernova is the new station of the zpr media group, which replaced the Wawa radio broadcasting since 1992. The former station initially broadcast only in Warsaw, but in the following years the distribution also included other large cities, m.in. in Kraków, Gdańsk, Kielce, Opole, Toruń, Wrocław and Rzeszow. Therefore, it was decided to change the name of the network to super nova, so that it would not be associated only with Warsaw, since it broadcasts programs in other cities of Poland.

Zpr media group received permission to change the name of the station from the National Council of broadcasting at the end of last year.

To start “the beginning”

Radio supernova began broadcasting on Wednesday, May 5, 2021 at 6.00. The first song, which appeared on the air of the new station at 6.00, was “the beginning” from the men’s game 2018 performed by David podsiadła, Kortez and Krzysztof Zalewski.

The new station liner is “we play in Polish”. The frame will be filled with contemporary polish hits, as well as songs from the 80s., 90. and created after 2000. The station will also focus on the promotion of new sounds and pop art.

– It’s a new beginning for us, a new opening. We enter this adventure with new energy and very excited. We want to offer our listeners the best polish hits, new sounds, valuable content and topics that excite them – comments Anna Paluszek, program director of Radio supernova.

The frame of Radio SuperNova from Monday to Friday will open the program “Before you supernova day!”, which will be broadcast in the 6.00-9.00 band. The program will be hosted by well-known Wawa radio hosts Katarzyna żochowska and Jakub Adamiak.

“Before you supernova day!”it will also be broadcast on Saturdays from 8.00 to 10.00. New in the program will be m.in. “SuperRing na grubo” – the author’s program of Artur jarząbek, who moved to Supernova from Eska radio, and the column” plum in compote ” by Marcin Sliwa, a Krakow journalist of the station. “Supernova day” will be created in cooperation with journalists of ZPR media group.

On weekdays at 9:00 a.m. the accompanying band will start ‘Supergrams”, which is led by David Wajda. At 12.00, Artur Jarząbek will present an hour-long program “SuperNova at high noon”, in which he always deals with exciting topics. Experts and listeners will be invited to the program. Mateusz Kwiatkowski will take over the microphone from 13: 00 in the second part of the” SuperGramy “accompanying band, and at 15: 00 Piotr jachim and Kamil Kowalski will start the” project afternoon ” program, presenting a summary of the day. In the series, the most important events will be discussed by journalists of the zpr media group, as well as permanent positions such as “superbiznes” and “SuperSport”.

The next item that will appear on the radio is “Urban gaming-a zone of culture and new music” Monica King. The program will cover topics such as: art pop and new aspirational music. Interviews will be conducted with artists, cultural creators, musical premieres and cultural recommendations will also be held. The show will be broadcast from Monday to Saturday from 18.00 to 21.00. On Saturday in its framework at 20:00 will appear “Super 13 – the hit list”.

“SuperWeekend” will dominate the weekend band

On weekends on the air there will be a band “SuperWeekend” (Saturday 10.00-18.00, Sunday 8.00-22.00), during which you can listen to m.in. interviews with artists conducted by the music director of the station Paweł Wiszniewski. Leading the “SuperWeekend” will be m.in. Piotr grządkowski, Mateusz Kwiatkowski, Piotr jachim and other presenters of the station. 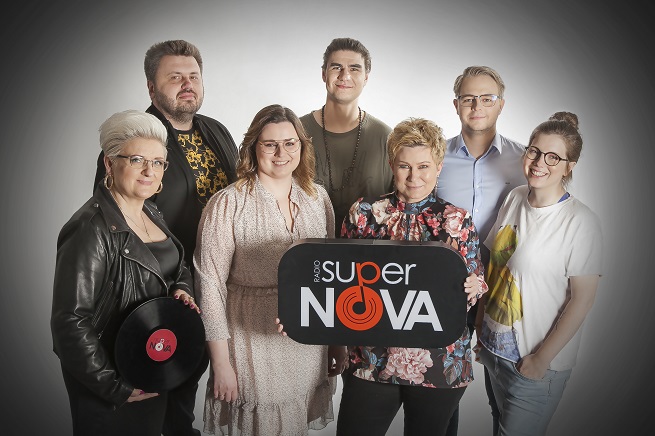 The setting of the supernova station was prepared by Maciej Woźnica, producer of the ZPR Media Group, and in jingles Dede Negra (known m.in. from the cover “mine is this piece of the floor”).

At the same time with the start of the station launched a new website radiosupernova.pl and a new mobile app. – We will provide infotainment content from the antenna as podcasts on our website and in the application, this is an important direction of development for us-comments Paweł szaniawski, president of the companies to which the Supernova radio licenses belong.

According to the Radio track survey in the first quarter of this year, the Wawa radio network had 1.5 percent. participation in the nationwide market for audibility.

Wawa radio broadcaster-international communication company-in 2019 had 4.7 million PLN of revenue and 323 thousand. PLN net profit. The owner of the SuperNova station is the Time Radio Group (part of the ZPR Media Group) to which they belong m.in. Eska rock, Eska, Vox FM and radio plus.