Palais Augmenté Festival: come walk with and in the works of art !

You point the camera of your smartphone at a board, and its two-dimensional finitude bursts into dynamics, volume, around you ! The work comes alive, explodes in colors, and leads you to wander in a space that you will now share with her…You are at the festival “Palais Augmenté”*, in a walk of discovery of artistic creations designed in virtual reality, within the huge nave of the Grand Palais Ephémère in Paris. The imposing temporary structure built between the Military School and the Eiffel Tower will host artistic events during the renovation work of the Grand Palais (which will reopen in 2024), and hosts on Saturday 19 and Sunday 20 June 2021 this event organized in partnership by the Réunion des Musées Nationaux-Grand Palais (RMN-GP) and the photography magazine incubator of startup Fisheye.

The reflection of the artists invited to invest the ephemeral nef -five international creators and two schools of the image-plays on the place of technologies in our lives, on our relationship to what surrounds us, and especially on the interaction between concrete space and augmented reality. Which here achieves a major surprise effect due in large part to the magnetic presence of the architecture, the transparencies of its canopies, the powerful wooden curves of the ceilings. The creations are therefore presented in the form of “paintings” placed on the ground and accompanied by information about the authors. Once the animation of the work is triggered, via the smartphone, the spectator participates in its deployment in the places, and his perceptions oscillate constantly between real and virtual. We are in the work, we follow and we induce its evolutions with our own movement, but in the screen of the phone and all around us, the other visitors are also present, digital images visible on the screen and body in flesh and bones, right there, next to it, sharing the same wandering. A funny waltz of figures captive to a meaningful illusion.

When Lauren Moffatt’s fantastic giant Counter-Diving flora hatches, takes root at your feet and colonizes the concrete, in an invading profusion along the bay windows, the mind is confused : our sense of proportion is reversed, we are tiny humans amazed by the gigantism of a plant mass that we can move by moving the phone screen, observe in its tiniest details, or penetrate, getting closer and closer, while the sensation of engulfing in the bowels of an unknown creature rises. And we can live these augmented reality experiences in a totally playful way, letting ourselves be surprised by the constant changes of sensory perception codes and by Theo Triantafyllidis ‘”Genius Loci”, a kind of giant pink caterpillar that floats in the air and engages in a game of exchanges sometimes moving sometimes playful with the spectators. 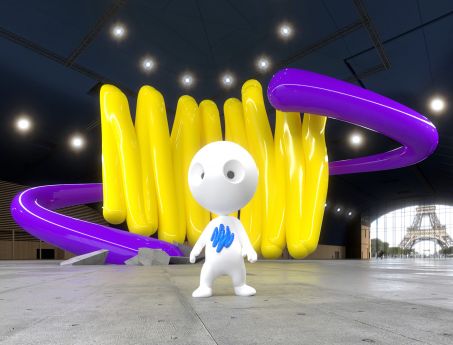 “Where to go from here” © Manuel Rossner / Palais Augmenté

But one can at the same time become aware of how art continues to challenge our daily postures : we engrave a multitude of traces, concrete and virtual, in the space we inhabit. Are we aware of this ? Mélanie Courtinat’s” Footprints on the strike ” dispels our doubts…Through a technology linked to 5G, the artist envelops us in the hypnotic and destabilizing visualization of the marks we leave behind, an infinite network of convolutions and ghostly footprints of bodies that slowly vanish, and reappear, as we wander through the places. And then the bet of the artists – and the organizers of this festival-will be successful.

* Palais Augmenté, 19 and 20 June 2021 at the Grand Palais Ephémère in Paris, free access, registration on palaisaugmente.fr