There is a new hype on the Internet: Non Fungible tokens or NFT for short make unique works of art out of ordinary files – for which unique amounts are paid, sometimes even double-digit millions. But actually, the NFT are not necessarily intended as objects of speculation.

At the latest since March 11 of this year it is clear: NFT are the next big thing on the Internet. On this day, an otherwise rather bad – tempered web artist named Beeple really made money: Vignesh Sundaresan and Andand Venkateswaran from Singapore bought him an electronic collage of 5000 individual pictures for more than 69 million dollars-around 59 million euros. In return, the two buyers received only one file and one so – called NFT.

The abbreviation NFT stands for”Non Fungible Token”. The term fungibility comes from legal science and refers to the interchangeability of goods. A kilo of gold is interchangeable. Or the three eggs you lend to your neighbour. In contrast, non-fungible goods are unique and not interchangeable. For example the Mona Lisa or the pretty villa on the beach.

In order to turn a file that can be copied as many times as necessary into a unique, “non fungible” work of art, it receives a cryptographic signature – an NFT. To this end, the artist registers his artwork in a blockchain. Through this process, the NFT is created, which uniquely identifies the file and simultaneously serves as a forgery-proof deed of ownership. This package can then be bought and sold like an original painting

Blockchain and the smell of money

Even though this is by no means fixed, Ethereum is currently used almost exclusively as a blockchain. Ethereum is the second largest crypto currency in the world, which is certainly part of the fascination of NFT-NFT surfing the hype wave of virtual currencies such as Bitcoin. Ethereum and many small relatives achieve ever more abstruse course records. Some see it as the currency of the future.  Here it smells like money, like a lot of money.

The basic principle of blockchain even goes back far before the digital age. The Italian philosopher Maurizio Ferraris compared it to a notched stick: “In this technique, which is as primitive as it is refined, two sticks are placed next to each other and carved crosswise, each notch corresponding to a fault. The creditor takes one stick, the debtor the other. The creditor will not be able to add a notch and the debtor will not be able to eliminate one, since the comparison of the two sticks would immediately reveal the forgery.”For him, the blockchain is nothing more than a notch extended to countless computers. Of course, this is actually a lot more complicated, but in principle it works the same way.

But also the idea of signing electronic art with an NFT and then offering it on the virtual market is not new. It practically exists since there are blockchains. There has long been in the network exchanges, such as Rarible, know the origin or Async, the largest marketplace means OpenSea. Those who now develop the hope of being able to sell their self-created JPEGs or GIFs for a lot of money will soon be disappointed. True to the principle of scarcity, it is quite laborious. to be included in the illustrious circle of artists who are allowed to offer their works of art on these platforms. 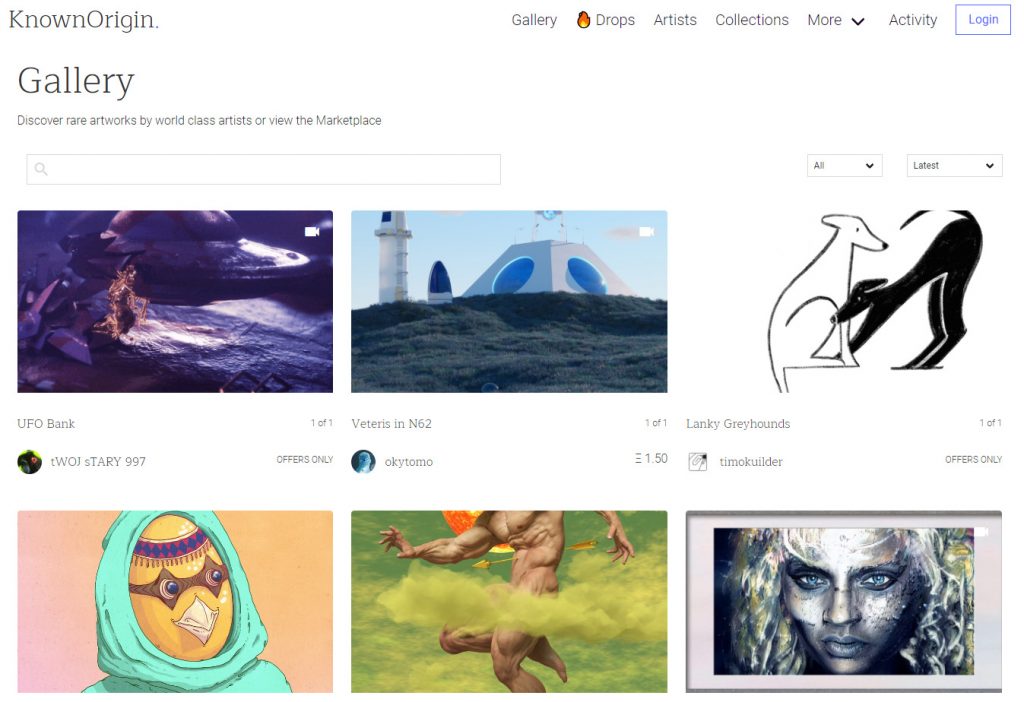 Digital works of art and the associated NFT are traded on stock exchanges such as “Known Origin”.

And those who are allowed to sell do not necessarily get rich. Because even if there are clear outliers to the top, most of the works of art offered on the platforms go away for amounts under 1000 euros, many also under 100 euros. Payment is usually made in crypto currencies. Who wants to buy must first “change money”. For the change process and above all for the purchase process via the blockchain, high fees are sometimes due, which can represent a multiple of the actual invoice amount, especially with low purchase prices.

Each transaction must be encrypted and distributed throughout the blockchain. This process is extremely resource intensive and costs tons of electricity. By the way, an often mentioned argument of blockchain opponents. This process is handled by the so-called miners. They receive money for this – the so-called gas costs. And they rise and rise – demand determines the price. This is rather a hindrance to the emergence of a mass market.

However, this does not bother collectors and speculators much. They continue to invest in digital art.  For example, pictures painted by an AI with a robot arm were sold for over one million dollars (840,000 euros). The self-portrait of the robot alone was worth buyers around 680,000 dollars (around 578,000 euros). Vignesh Sundaresan and Andand Venkateswaran, who have made much of their money using crypto currencies, are already exhibiting their NFT collection in the virtual world Cryptovoxels. There you can buy virtual buildings for real money as you once did at Second Live.

Whether normal users can get rich on digital art platforms like “Async” can be doubted.

Are NFT preparing the way for Web3?

But Second Live has long been history, and the hype around crypto art could also be declining again-at least if you look at the prices recently achieved.

However, this does not change the potential significance of NFT beyond the art scene. For the crypto scene, the tokens are no more and no less than the start of a new generation of the Internet: the Web3. The main feature: the Internet and especially the data management become decentralized again. The associated hope: companies such as Google, Facebook or Amazon could lose their importance.

Bands and fans, side by side

What sounds more theoretical could bring enormous advantages, for example for the musicians. Because just as you can make pictures unique with an NFT, you could also do that with albums, for example. Unique digital collectibles are created – hand-signed copies, so to speak. The artists could sell them on their own account without a record label or even streaming platforms like Spotify or Deezer. In addition, these platforms currently (still) use their algorithms to determine what will be a hit, and what will not. This could also change in the future.

Kings of Leon play at the forefront

One of the pioneers is the Kings of Leon. “When You See Yourself” was the first pop album ever to be bought with NFT. The album was sold until March 19, 2021 as “NFT Yourself”. For 50 dollars, you not only got a Download, exclusive Artwork, and a limited Vinyl edition, but also the Token as a collector’s item. In addition, 18 “Golden Tickets tokens” were minted, which include lifetime admission to the band’s concerts. The proceeds were partly donated to Corona-damaged tour employees.

In the future, so – called smart contracts could ensure that the creator of the NFT gets a certain commission for each further sale-completely automatically. Thus, it is even conceivable that the fans buy from their favorite band and participate in the success in the future.

Further thought, cryptographic signatures can also simplify our lives, for example by certifying digital identities or documents such as certificates and diplomas. Passwords, Translations, and going to the notary will then be a thing of the past. It is also conceivable to regulate the ownership of real estate or works of art via NFT. Mona Lisa, for example, could also sell piecemeal without the Louvre having to hand over the painting.

But this is definitely future music. The protocols used are not yet really equipped for mass use, and the legal framework for such mind games is still lacking. And then there is another obstacle: the lack of scalability of blockchains such as Ethereum.  But maybe Ethereum isn’t really the medium of the future. Already today, there are other systems that can handle administrative tasks more efficiently and with significantly less power consumption.  And the development has only just begun.