Never was the fear so real. I'm getting so sick.

At the latest since Christmas, when even casual gamers proudly presented their selfies with virtual reality glasses for the Playstation 4 on Facebook, the expensive gadgets have arrived in the middle of society. In the beginning, VR glasses were quite a gimmick for the consoles. In the games that were nothing more than mini-games, for example, you sat in roller coaster cars and drove through a horror cabinet. Horror clowns tried to kill one.

That was quite cool, but you were so fixed in your seat that it was always clear to you that this is all just a game. And you had to be pretty stupid to get caught by the grinning cats. What was missing was a game that makes Playstation VR glasses indispensable. Now it’s here. It smells of blood and modders. It’s called Resident Evil 7.

Of zombies and other monsters

Although it copied the basic concept from the classic “Alone in the Dark”, the “Resident Evil”series is considered the epitome of the survival horror game. The player takes on scary opponents such as zombies and other monsters in gloomy settings. The last parts of “Resident Evil” gradually became more and more action-packed. The undead, main opponents in the game, could even run at once and no longer shuffled around rather leisurely.

Almost five years after part six, developer Capcom is reinventing its most prestigious game yet. The player sees everything from a first – person perspective-with VR glasses that completely encapsulate him from the outside world and make him part of the game. Nevertheless, I withdrew for my self-test. Played alone and at home.

My difficulty level is “Normal”. As an alternative, there is still “Simple”. But I really want to experience something. I play Ethan, who gets a video message from his wife Mia after three years of radio silence. With the characters from the predecessors, the two have nothing more to do. At the end of the short, disturbing video, Mia says, ” If you see this: Don’t look for me!“

Which of course only leads to Ethan immediately making his way to rural Dulvey in the US state of Louisiana. We can trace Mia’s trail back to an old, dilapidated estate. Along the way, the landscape slowly but surely turns from a green grove into a swampy morass.

With the VR glasses, I just have to move my head to look around. I can also rotate 360 degrees, look up and down. Only for moving I need the controller in my hand. VR on a treadmill, that’s it, I think to myself.

Dangers could be lurking everywhere

Once in the house, the acclimatization period is over. The property is mainly made of decayed wood, everywhere the wallpaper comes from the wall. The power is off, I see everything only through the small cone of light of my flashlight. A simple trick, but damn, it works. I constantly look around and point the flashlight at another dark corner. Dangers could be lurking everywhere.

In the kitchen of the house I find intestines and other parts of the body in the saucepans and in the refrigerator, dried blood sticks everywhere. The minimalist music of the game underpins the creaking boards under my feet. My heart beats faster, I suddenly hear myself breathing louder. 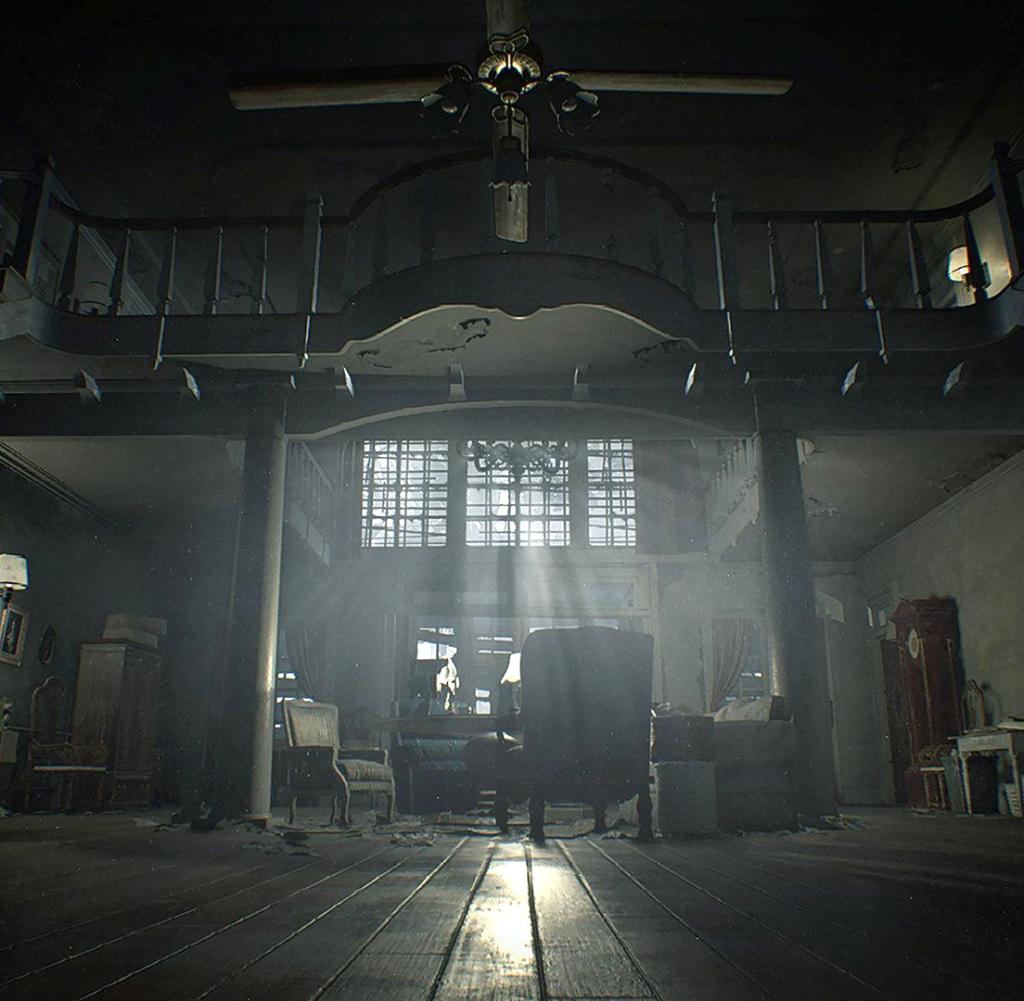 My eyes only see what the VR glasses show them. This is how you fool my inner ear with movements. When I fall in the game, I feel it in my stomach. The same feeling when you miss a step while climbing the stairs. I know the horror house is just a game. But through the VR glasses I forget that. It feels real. I am afraid.

I find Mia in a dungeon, together we want to get out of the house. Of course, this does not work out, instead I get to know the inhabitants of the schnieken estate – the Baker family. After the lights have been switched off, I wake up in a bizarre round. I sit at the table with mother Marguerite, father Jack and son Lucas. I don’t really have an appetite.

Is that colon on the plate?

What’s on my plate looks like a large intestine. Father Jack is still giving it to me by force. After that I can free myself somehow, but probably only because the family still wants to have fun with me: Father Jack chases me through the house. While he keeps his walking pace, I start to run involuntarily.

In contrast to many horror films, you can’t turn your head off in “Resident Evil”. To move forward, I constantly have to solve new puzzles. Sometimes I just have to find the right key for the right door, other times I have to use a projector to cast a shadow play on a painting to open the secret door behind it.

For this, however, I must first find the right object that I hold in the light. But I just can’t find it. “No, I solve all the puzzles myself!”, I say to myself. Just to type “Resident Evil 7 Painting Puzzle” on Google ten frustrating minutes later. Of course, nothing comes, I play the game before the official release. 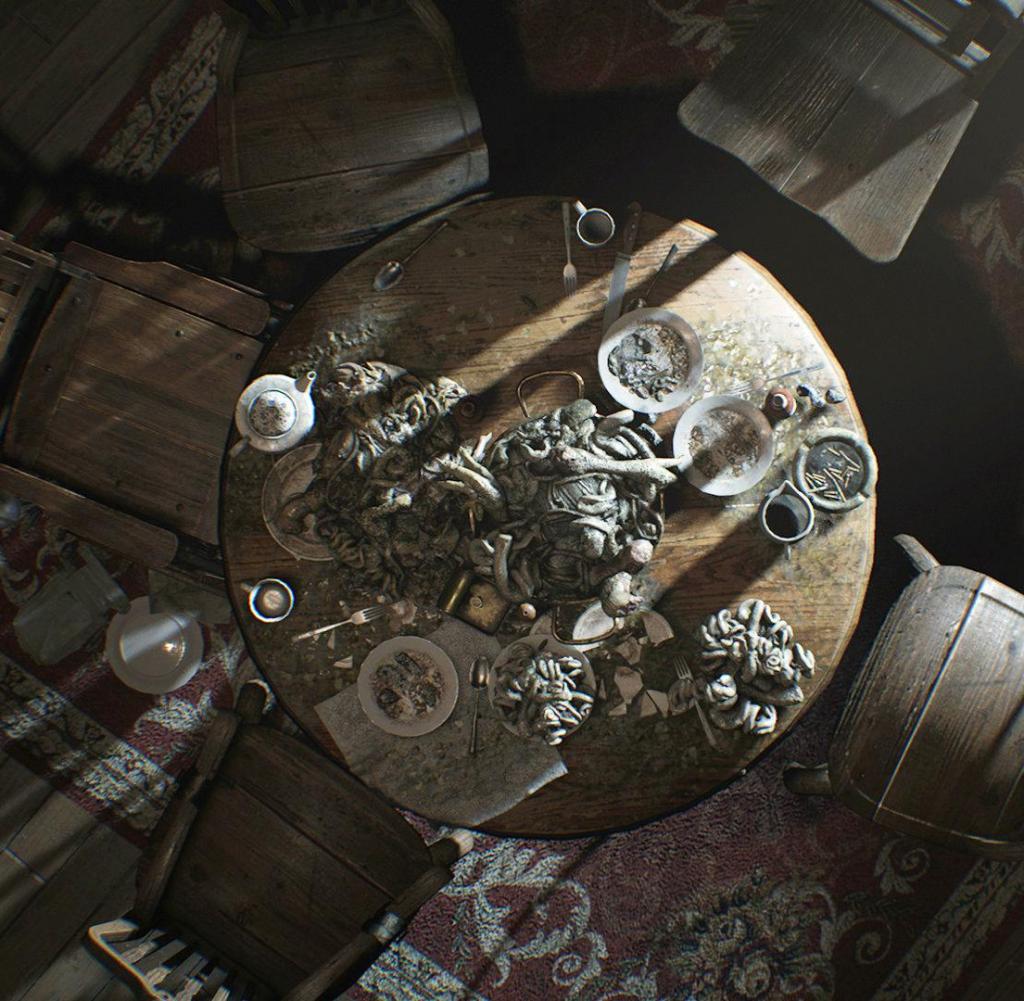 As I traverse the rooms, symbols show me which objects I can interact with. This allows me to open certain drawers, take a closer look at paintings, and also see what I can use or pack into my inventory to use elsewhere. This inventory has “Resident Evil”-typically only a limited capacity, so I have to constantly think about what I really need right now, and what I don’t.

It is stored in good old serial tradition in cassette recorders (formerly these were typewriters). Next to it are always thick chests, in which I can put superfluous inventory. However, this should be well considered. Because what’s gone is gone. The memory stations are rare, but according to the zeitgeist, the game also saves automatically.

Woe betide you if you only have one pocket knife left

Actually a reassuring feature, so that I do not have to play again after my numerous deaths frustrated the last half hour. Nevertheless, I get scared at every caching. My thought: where is automatically saved, a great danger lurks behind the next door.

Again and again I am hunted, and father Jack or mother Marguerite are still the friendlier contemporaries. Soon I am pursued by black, moldy figures. Gradually, fortunately, I find weapons. A pocket knife, then also a small pistol. However, the ammunition for this is deliberately kept scarce, each shot should be well thought out. Otherwise you only face the enemies with your pocket knife at the end. 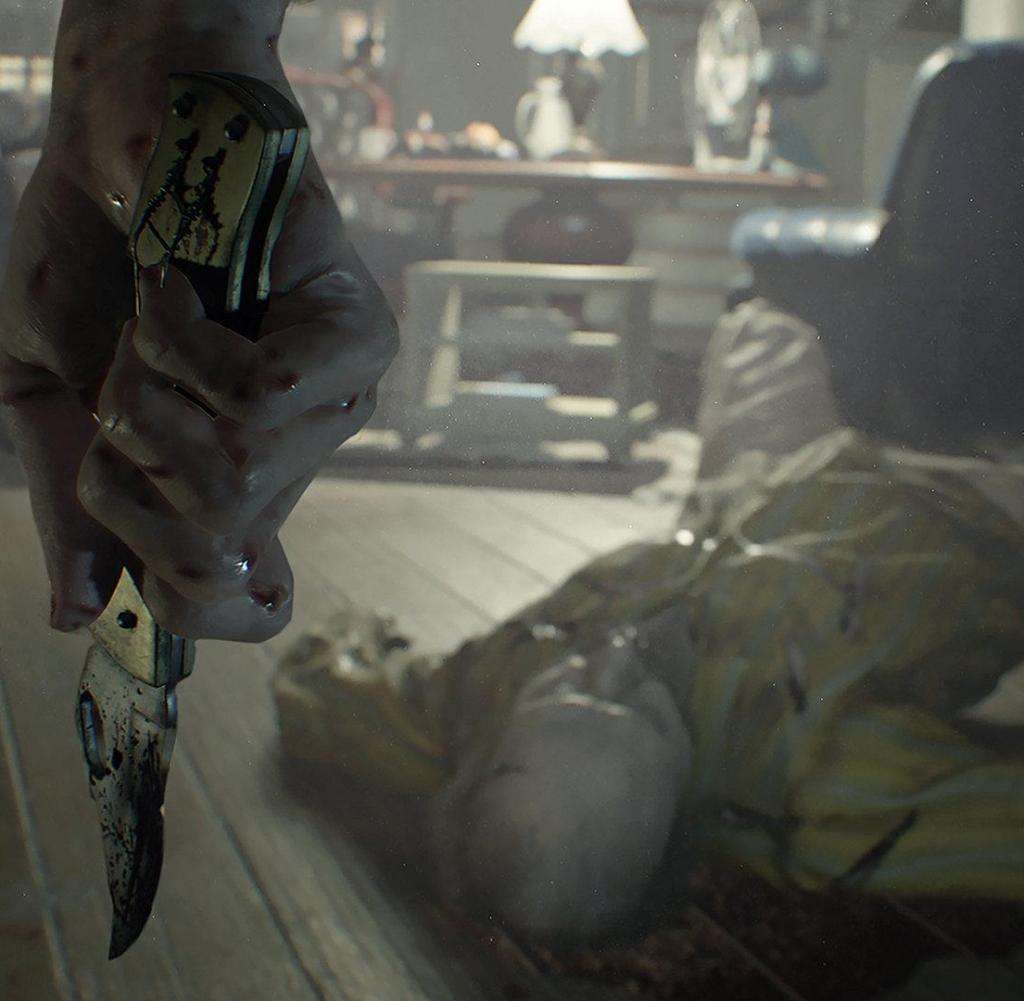 And that’s really bad, because that’s how I have to go into hand-to-hand combat with the monsters. And then I stand in front of one of the critters and stab again and again with my knife. Just so I can still do this thing. I take a breath, take a healing potion, turn around – and look the next monster straight in the eye. I scream out loud – and get done. My pulse is racing, I sweat under the VR glasses. That’s exactly what virtual reality was invented for.

If all this is not enough, developer Capcom has something very special on offer: A “Resident Evil”4-D candle. The gadget smells of blood, sweat and old wood when lit. So the gaming experience should be even more intense. It’s called immersion. The gadget is available for just under 17 euros.

Ten hours in the Horror House

All in all, the player should need ten hours to play through “Resident Evil 7” on the difficulty level “Normal”. So far I did not make it, after almost four hours nonstop in the horror house I allowed myself and my psyche to finish the self-test.

What I still know: “Resident Evil 7” is the future of gaming. The game shows where the path must and will go.