A week before the opening of the fourth edition of the VR Arles festival, the organizers had a few sweats. Hermetic administrative considerations between the United States and France held at customs the package of Magic Leap One, this mixed reality headset that allows to interact with virtual elements. It was a bit damaging for a virtual reality festival that, in this year 2019, has resolutely focused on interactivity. In fact, Luna: Moondust garden, the film concerned, was unavailable to the public while the equipment arrived in extremis was installed and the adjustments made.

Created in 2016 as part of the Rencontres de la photographie d’Arles by Fisheye magazine and its partner BNP Paribas, this festival quickly developed its formula. Still installed in the convent of Saint-Césaire whose shaded patio serves as a waiting room, it is held all summer in two viewing spaces. But while a standard virtual reality experience requires only a headset and sensors, this time the organizers have worked a lot on the involvement of the viewer. A dozen creations require his intervention to advance the story.

For Emergence, by Matt Pyke, the character advances in a crowd, controlling the movements of the latter, guided by an HTC Vive controller held by the spectator. The whole animation of Fever, 6 minutes filled with hands modeled in 3D, depends on the behavior of the viewer. Hanahana multi-bloom (image below) is a game consisting of creating structures stacking arms and hands on top of each other. To immersion and interaction, it adds a collaborative dimension. The painting of Bruegel the Old Children’s Games serves as the basis for 1, 2, 3… Bruegel !, a game, again, where it is about turning around a virtual model from the painting and finding the children hiding there. 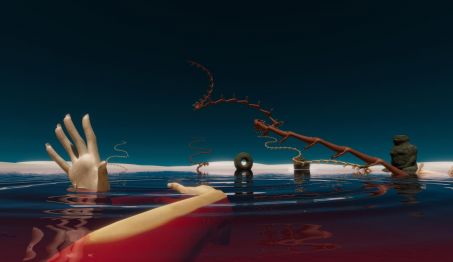 As for 7 Lives, by French director Jan Kounen, he offers the viewer to choose which characters, witnesses of a suicide in the Tokyo metro, he wants to be interested in. The disturbing Psychosis, which explores the visions of an authentic psychiatric hospital inmate (British playwright Sarah Kane), goes one step further : using the Leap Motion sensor, the viewer / actor can see a 3D modeling of her hands, but bandaged. He is otherwise seated in a wheelchair and moves in the experience by pressing the footrest and rotating the wheels…

The wheelchair itself is placed in a separate room decorated like a hospital corridor. Because in addition to interactivity, the festival also insists on scenography, which is more and more elaborate from year to year. “We realized that we had to accompany people, that the way we enter immersion is as important as immersion itself,” explains Benoît Baume, founder of Fisheye and the festival.

Penumbra, curtains and silence were already in order in previous editions. This time, other details are added. For the Re-animated film, which takes place in a virgin forest, the viewer has his feet on a floor of wood chips. For 7 Lives, we settle in an environment of neon closets and Japanese ideograms evocative of subway signaling. The post dedicated to Fever is surmounted by photographic paintings depicting deformed hands.

And yet, one of the strongest experiences of the festival is free from this kind of artifice. The documentary Traveling while black takes place inside a Washington DC diner, Ben’s Chili Bowl, and the viewer occupies different positions (at the counter or behind, on the bench of several boxes) to listen to the testimonies of Black Americans on segregation and racial violence.

Using in-house optics to create the illusion of sitting right next to the characters, highlighting the strength of these stories, the filmmakers manage to create a sense of closeness that is unprecedented in VR. We come out confused, troubled. There is no wood chip or wheelchair, for Traveling while black, but distinguishing virtual and real suddenly doesn’t make much sense anymore.

FESTIVAL. VR Arles Festival, until August 25 at the Saint-Césaire convent, impasse de Mourgues in Arles. Open from 10 am to 7.30 pm. Information, programming and prices on the website.