How can I explain to my boss why he needs artificial intelligence? Show me these statistics


Solutions in the field of artificial intelligence (AI) at the start of the development of this technology caused a lot of doubts in the business environment-ranging from how they are really applicable to solving practical problems, to fears that the use of AI for military purposes and business intelligence could lead to new, more dangerous viral epidemics and other catastrophic consequences. According to recent surveys, the point of view has changed dramatically over the past few years: business considers AI an integral tool for the development of any modern company.


The Intelligence Unit of The Economist magazine in early August of this year published a report on the study “AI’s transformation of industries and society” (“Artificial intelligence transforming industries and society”), which was attended by more than 400 top managers of public and private companies from around the world. The results showed that companies ‘ distrust of artificial intelligence is a thing of the past. Almost all the interviewed managers already consider it important for solving the strategic tasks of their organizations. In confirmation of this 27% have already implemented AI in key business processes and services, and also 46% are preparing pilot projects based on it.


According to the survey, despite the existing prejudices, 94% of managers believe that these technologies are important for solving the strategic tasks of their organizations, and 37% describe them as”very important”. Top managers are confident that AI will improve many areas of their business in the coming years. In particular, it will help with the introduction of innovations (89%), attracting and retaining talented employees (85%), as well as in the development of products (84%). Also, 59% of managers are confident that AI will increase the salary of employees, and 56% associate it with an increase in the level of employment in their country or industry.


Companies most often use AI for predictive analytics, real-time operations management, customer service and risk management. The most popular field of application varies depending on the industry: retail respondents are more likely to indicate customer service (31% compared to 21% on average for all industries), and the financial sector-the detection of fraudulent activities (25 to 16%).


Respondents are confident in the positive impact of AI not only on the development of their business, but also on the economy as a whole over the next five years. So, in their opinion, it will contribute to economic development (90%), increase productivity (86%) and innovation (84%), as well as create jobs (69%) in their country and industry.

In assessing the success of the implementation, the most common criterion for managers is the quality of the solution (36%). This is followed by return on investment (ROI, 32%) and customer satisfaction (31%). 14% of companies admit that they do not yet have established indicators to assess the success of the deployed solution. 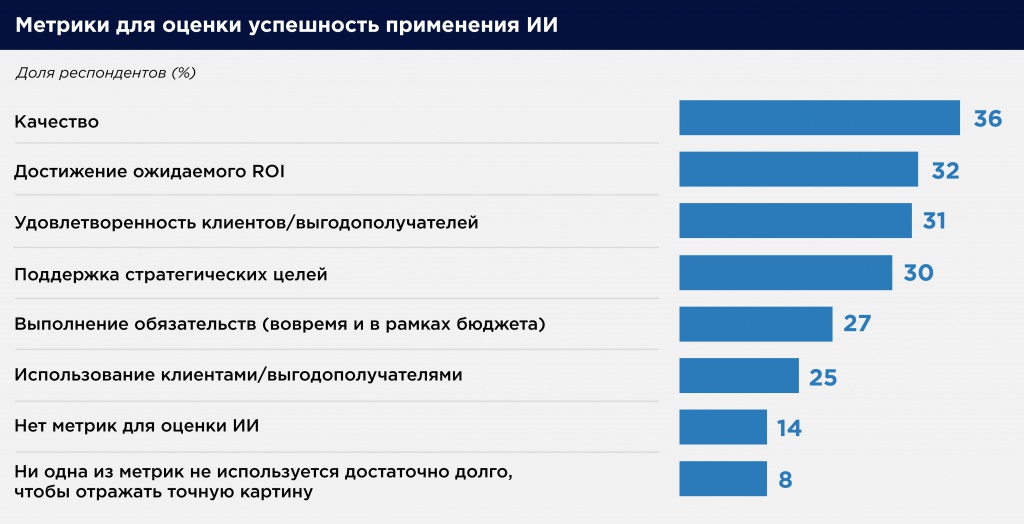 The trends identified in this survey were identified last year. This is confirmed by a study conducted by the company Teradata in 2017. So, 80% of the surveyed companies Even then, they said that they were already implementing certain AI-based solutions and expected a ROI of $1.23 for every dollar invested in the future for three years. More than 60% of respondents they said that they are considering the introduction of a new position of “Director of AI” (Chief AI Officer) — by analogy with the director of information technology. At the same time, 91% of respondents still see significant obstacles to the development of AI solutions: primarily due to the lack of IT infrastructure (40% of respondents) and the lack of qualified specialists (34%).


This year, according to the study The Economist Intelligence Unit, the business cited other constraints when implementing such technologies: financial risks (42%); difficulties in deploying if the organization does not have the necessary resources (36%); as well as difficulties associated with training employees (35%). Nevertheless, companies are taking concrete steps to resolve these problems: 76% said that they are prepared for the risks associated with AI, and 71% — that they have already developed strategies and rules for its implementation and control.

Analysts and consulting companies also share optimism about AI. So, PwC made a forecast a year ago that by 2030 the GDP of all countries of the world it will increase by 14%, or by $15.7 trillion, due to the use of AI — based solutions, this is more than the current income of the economies of India and China combined. About half of this economic effect will be due to an increase in the productivity of human labor due to the use of AI, and then — and the replacement of some professions with computer algorithms. For example, in medicine, AI can do all the “rough” work, analyzing the patient’s medical history and comparing it with previously studied cases, and a live doctor will be able to make decisions based on the data obtained. According to a similar scheme, work will be built in the insurance industry, where AI can approximately assess risks based on the data available to the company, including big data, and an insurance company specialist will either agree with the computer’s decision, or adjust it if necessary, PwC experts argue. & #13;


Industry will become one of the sectors of the economy on which the development of AI will have the most significant impact. According to the ARK consulting company, by 2025 the cost of industrial robots will decrease by 65%, including due to the development of machine learning and computer vision technologies. The cheaper cost of robotics, as well as the development of related technologies, will lead to the transformation of the segment from industrial robots to collaborative robots (kobots) that will work in synergy with living people, simplifying the performance of production tasks.