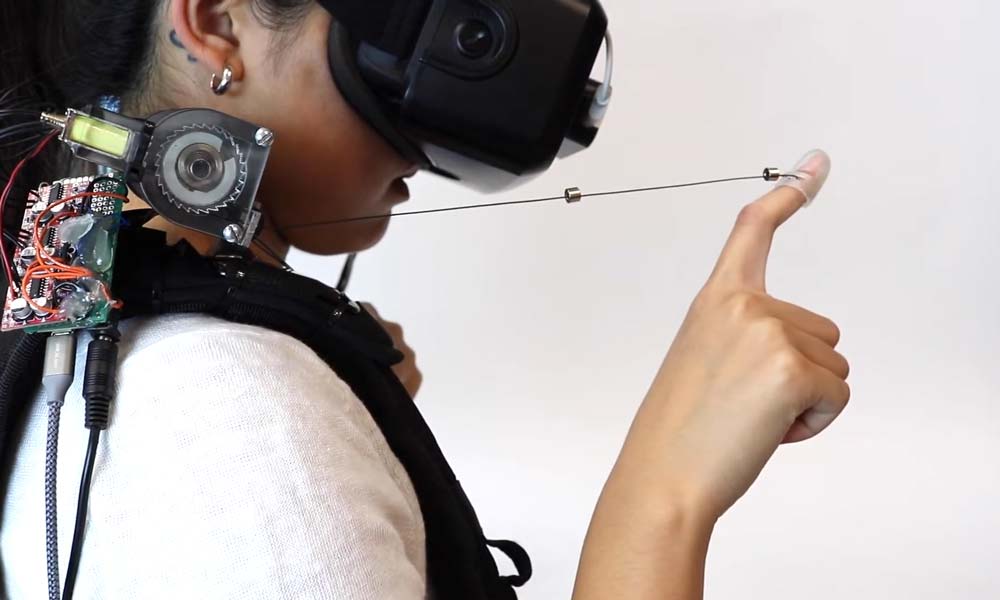 Tactile system Wireality designed to simulate the virtual resistance of the fingers. But visually you have to adapt.

Modern audio-visual systems and motion tracking in VR is significantly ahead of the previous model. However, in the simulation of tactile sensations, almost nothing has happened in recent decades: even the expensive, high-quality systems are limited to simple vibration motors in the controller.

There is no shortage of ideas for tactile simulation is constantly receiving new proposals from research laboratories. But yet none of them was ready to enter the market. Maybe it’s time?

Researchers from the group “Interfaces of the future” at Carnegie-Mellon in Pittsburgh has developed Wireality specifically for the interaction of hands and fingers with virtual objects.

Visually, the system does the following: steel cables coated with nylon on the fingertips, palm and wrist lead to a spring mechanism in the housing on the shoulder.

This mechanism can clamp or loosen the steel rope for 30-40 milliseconds, which corresponds to the resistance in VR.

The simulated resistance for the cable is 80 grams, the prototype is fully assembled, the wire can pull up to 560 grams. The maximum range of the cable is 83 cm, from shoulder of the housing.

Leap Motion detects hand movement and sinhroniziruete them using the software with tactile effects. As soon as the user raises the hand from the object of virtual reality and SAG of the cables, the spring pulls it again.

The researchers describe their invention as a fast and precise with a light, compact and affordable: weight of the prototype is 273 grams for shoulder devices and about eleven grams on the fingers.

For large series Wireality could be made for less than $ 50. Power consumption should be as low as 0,024 MWh, it is possible to work from a mobile battery.

According to the researchers, the conductivity can, for example, to realistically simulate when you are leaning on the railing in VR or hold your hand over the surface of the object if it is not too complicated.

If you grab smaller objects, it may happen that the wires will touch the fingers, and it interferes with the immersion. So Wireality more suitable for large objects. Since the entire system is focused forward, she can simulate tactile sensations only for objects that the user touches the front.

During a test run with twelve subjects reviews about the device were mixed, compared with VR controllers the degree of reality simulation virtual reality was rated as higher. However Wireality were rated significantly worse, in terms of comfort. 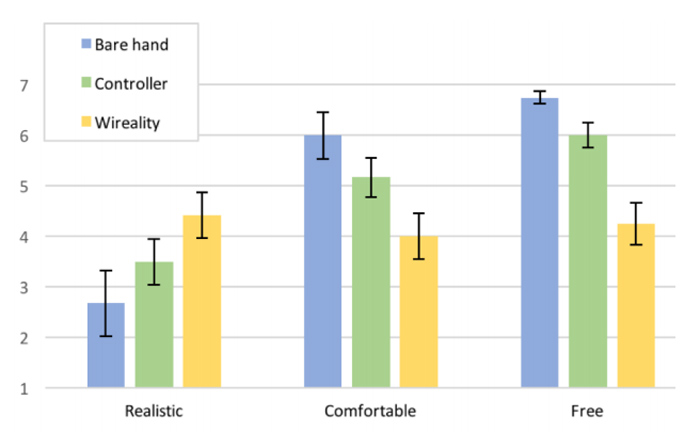 Despite these limitations, the researchers believe that their system is suitable for consumers. The tactile effect is superior to the current system, which “are unlikely to be more vibrate”. Wireality can be combined with other haptic processes for future VR systems.