Facebook shows the keyboard "pinchtype" on the Oculus Quest

Facebook shows the keyboard “pinchtype” on the Oculus Quest 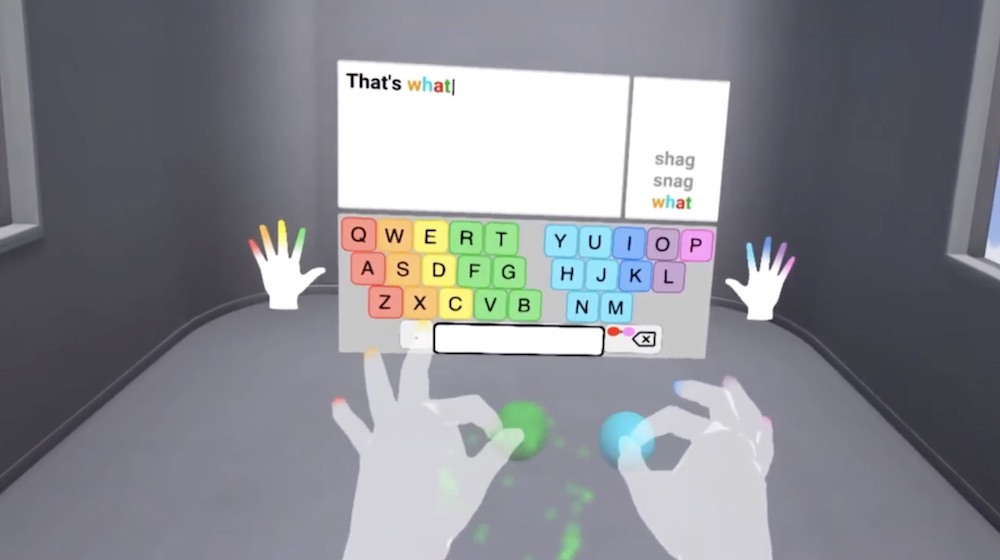 Anyone who has used a keyboard in virtual reality, knows how it is cumbersome and slow. Researchers at Facebook has developed a clever way of entering text, called “pinchtype”, which takes advantage of hand tracking, but takes some getting used to.

Users bring your thumb along with another finger of the same hand to select from a group of letters that correspond to the QWERTY keyboard layout.

Example: if you take your index finger with your thumb, you choose the group of letters that you press in a system of 10 fingers with the index finger.

This should simplify getting started with new text input. Fingertips and groups of letters are also color coded. This helps users that have not learned the system of the ten fingers.

If you have selected several groups of letters in a row, the language model AI defines a series of words that can match this combination of letters, and sorts them in the list according to their probability. In addition, users can choose the correct word from this list on their own.

This is achieved by using a combination of gestures left and right hands and movements of the right hand up and down. The combination of the pinch gesture is also used to press the spacebar. Both my thumbs together with forefinger.

To Pinchtype need to get used to

Facebook tested the suitability of the text input XR in the preliminary study with 14 participants. Criteria were the speed and accuracy upon first use.

Pinchtype was to be presented this month at the conference CHI 2020 in Honolulu, and also in the new version of tactile bracelet Tasbi. The event was cancelled because of the epidemic of the coronavirus.