Clunky, expensive - and a leap forward

It’s already a good sign when a tech tester finds it hard to tear himself away from his device to write down the experience with it. This is the case with Facebook’s new Oculus Quest virtual reality glasses.

Of course, this does not mean that she is perfect. It’s chunky and a little heavy. And because it works without a computer and cable, the graphics are mediocre. After two hours, the battery runs out. At the time of testing, which was three weeks before the start of sales on May 21, there were only a few games. Nevertheless, the Oculus Quest * is so captivating that you want to ask the manufacturer: keep it up.

The glasses reminded us of the Nintendo Wii of 2006, a game console with simple graphics. For the first time, many people with motion-sensitive controllers were fidgeting in front of the TV because they were throwing tennis balls over the net.

The Oculus Quest is a VR headset with built-in displays and a processor, so you no longer need a computer to use it. It is supplied with two controllers for the left and right hand. At almost 600 grams, the glasses are heavy, but can be easily attached to the head with the straps.

Setup via the Oculus smartphone app is quick. Apps and games can also be installed directly on the glasses, but this can also be done later in virtual reality. Oculus has already had similar glasses on the market for some time. But compared to the Oculus Go, the quest is a big step forward.

The two left and right eye displays have better resolution, and the built-in processor is faster. But the most important difference is the space tracking. While users of the Oculus Go only transfer their head rotation to virtual reality, Quest users can really move around the room. Four forward-facing cameras capture the position in the room. For other glasses, extra cameras had to be installed on the walls.

To start, users set an area in the room so that they do not bump into furniture. Oculus recommends a free space of two by two meters in size. So you have to move one or the other table, chair or armchair aside. Then this area can be delimited with one of the two controllers on the ground. If the user comes close to the boundary during the game, a virtual grid appears, which first turns blue and then red. The glasses even remember this demarcation for several rooms. 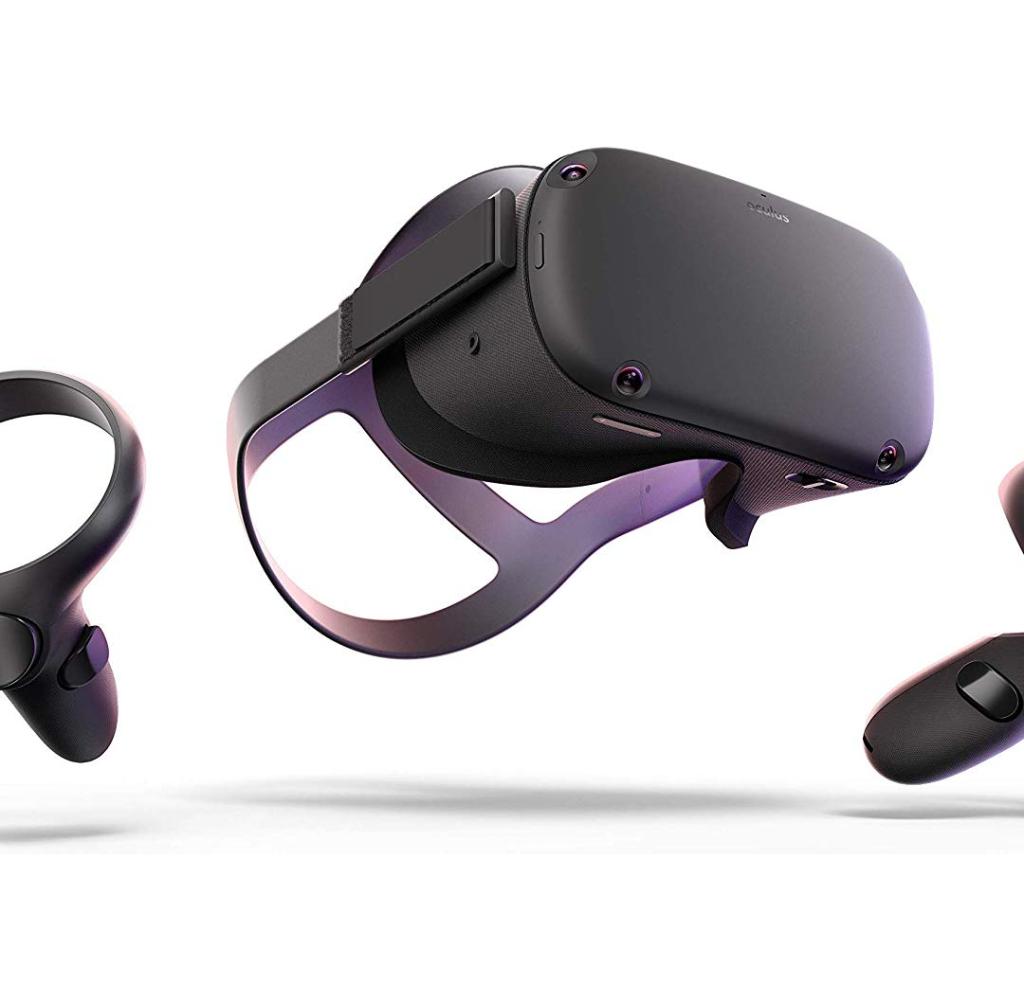 In conjunction with the two hand controllers, you can now really immerse yourself in the games, grab objects, throw them, move them. The controllers have several buttons, which are occupied depending on the application. In virtual reality, they become hands holding tennis rackets, weapons or fishing. A small introduction explains how it works. Space tracking allows not only turning the head. Players can now also move forward and backward, crouch or dodge. In comparison, the Oculus Go was just an appetizer.

At the start of sales, there will be more than 50 games and applications. We have already been able to try some of them. We liked Beat drool, in which the player holds a red and a blue lightsaber in his hands and has to disassemble cubes flying towards him to the beat of the music. From time to time he also has to dodge walls and let small mines fly past.

If you still know Wii Sports, you should also do with Sports Scramble easily. Users play tennis, bowling or baseball in the virtual world. That even fishing in virtual reality with the game Bait could be fun, we had not imagined in advance. Even Angry Birds is available in a VR version with a zwille that also feels like it.

Unlike the Wii, however, playing in virtual reality is more of an individual occupation. With the glasses you largely hide the real reality. Oculus is working on some solutions to address this shortcoming. Thus, the image that the player sees can also be streamed to a TV using Google’s Chromecast technology. Friends can then track what the player is doing. In the test, this worked perfectly.

However, it makes more sense to play in multiplayer mode, as is provided, for example, in Sports Scramble. Then players can compete against friends over the Internet who do not need to be in the same room. Not even in the same country. In the test, however, the multiplayer mode was not yet available. 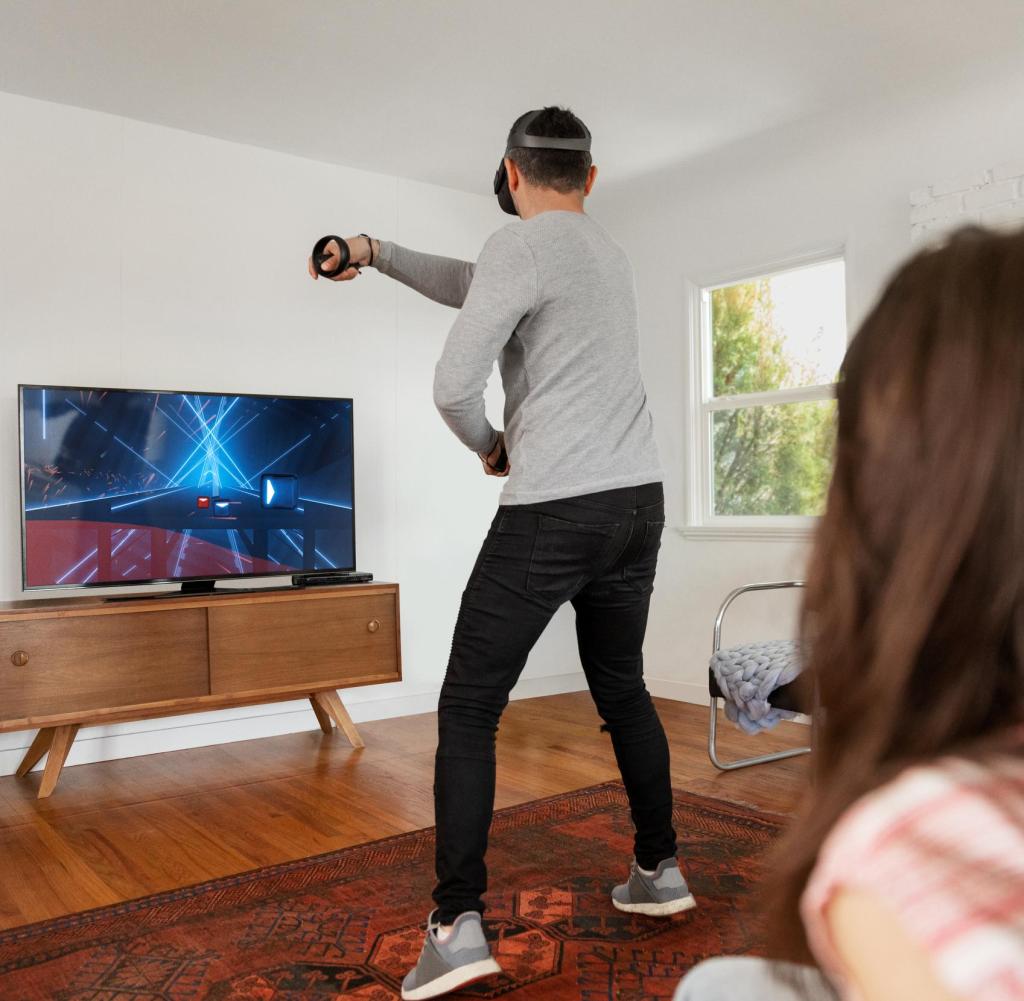 Conclusion: Space tracking actually makes the crucial difference when it comes to VR games. In the Oculus Quest, this is superbly solved. The setup and usage are kept really simple. By the way, the sound is output near the ears directly from the glasses. This has the advantage that you are not completely cut off from your surroundings acoustically. But if you want, you can also connect headphones.

The graphics of the games are still rather modest,which we did not find bad. But in the end, such a platform stands and falls with the choice of games that exist for it. However, it is still too early to make a judgment in this regard. One battery charge lasts about two hours while playing. Those who only watch videos can also manage up to three hours. Apps like Netflix were not yet available at the time of testing.

When playing, the Oculus Quest gets a little warmer, and a built-in fan starts to work. But you hardly notice it. However, in order to make virtual reality really deceptively real, it needs even better image and graphics quality, which is currently not possible in such glasses. The Oculus Quest costs 449 euros with 64 gigabytes of memory. With a memory twice as large, it will cost you 100 euros more.

* This text contains affiliate links. This means: If you make a purchase via the links marked with an asterisk, WELT will receive a small commission. The reporting does not affect this. Our standards of transparency and journalistic independence can be found unteraxelspringer.de/unabhaengigkeit.