What should a bank that has the largest number of branches in Poland, and business decisions are made from three cities several hundred kilometers apart, do to improve communication and reduce the costs associated with numerous delegations? Huawei found the answer.

New technologies in business are not only convenience, they can greatly improve safety, as well as bring tangible savings. However, in the case of the solutions adopted by the postal bank, these words, which sound like an advertising slogan, have acquired real value. Today, Pocztowy bank is not only a dynamically developing financial institution offering traditional banking services, but also mobile banking access channels and investing in innovative solutions. The bank serves nearly 1.5 million customers through one of the largest network of outlets on the market, numbering about 1.5 million. 4,600. location. Post offices located in almost every corner of Poland, including nearly 800 dedicated branches exclusively for the sale of financial products, micro-branches and so-called postal financial zones, are a logistical challenge. But the bank found a way. It is with the use of state-of-the-art technology. 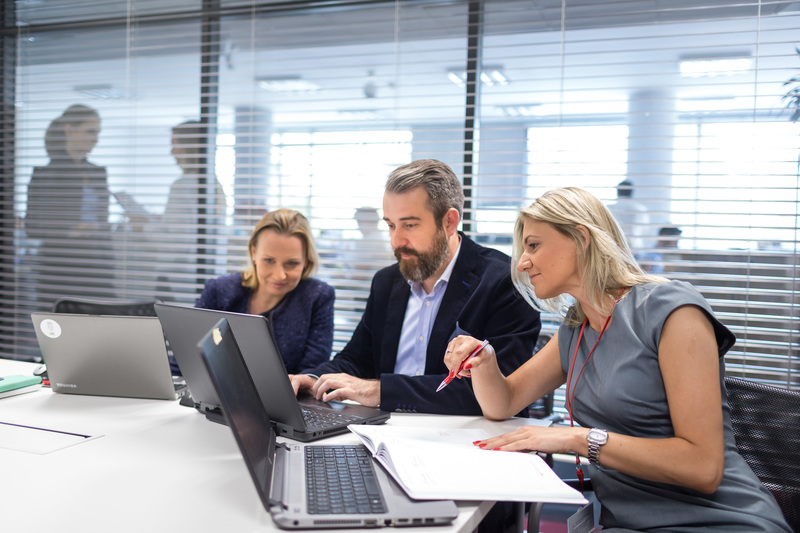 Bet on the leader

We are an example of a company where key business arrangements and decisions from the central level are made in three locations: Warsaw, Bydgoszcz and Lodz. That is why we decided on a solution that allows for effective communication on demand at any time from any place, accessible to any authorized employee – says Paweł Dudek, managing director of the IT division at the postal bank (BP). The bank has put on a professional videoconferencing system-a solution provided by Huawei. The Chinese company is a world leader in the provision of the latest information and communication technologies. According to data from the analytical company IDC, almost every sixth videoconferencing system installed in the world belongs to it. It is based on the solutions of Huawei, Orange built in France a communication system for the entire local administration. Huawei was also targeted by the international Hays group, specializing in human resources consulting, and domestic companies such as m.in. Allegro, or PGE, and the Ministry of finance. Less than two years ago, the postal bank joined this group. Paweł Dudek there is no doubt that the implementation of this solution was a great move. Videoconferencing reduces response and decision-making time and enables better coordination of employee activities in remote organizational cells. This also has its important economic aspect-it allows you to save time and reduce costs associated with m.in. with business trips – explains the director at BP. of course, the bank had to bear the costs of purchase and implementation, but these – as our interlocutor emphasizes-quickly return. – Over time, there comes a reduction in operating costs-adds Paweł Dudek. 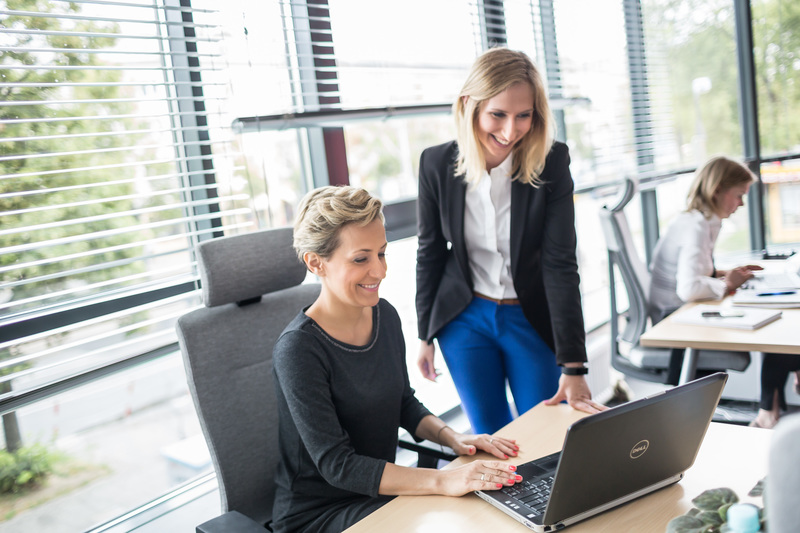 The choice of the Huawei system was decided by quality, price and innovation. – We had a significant advantage over the competition, because the solution offered by US gives the opportunity to “upgrade” to superhd image quality-tells us Tomasz bijak, sales director for the government sector and public administration in Huawei Poland. That was an important criterion. – We expected the possibility of switching to 1080p60 resolution, which gave confidence of a long product life cycle-confirms Paweł Dudek. Moreover, the provider provided the true technology of the future, which competitors did not have-the ability to make HD calls in the 384 Kbps band. – This is a great solution, because it does not burden the bank’s internal network and allows you to participate in video conferencing in the highest quality using a 3G network in your smartphone-explains Tomasz bijak. It’s an innovation whose effectiveness is hard to believe. Competitors offer HD quality in bands above 512 kbps. – Huawei in the framework of the conducted POC (from the English.proof of concept – ed.) proved that HD connections need only 384 Kbps, which significantly influenced the strengthening of expectations in relation to other manufacturers-admits the representative of the postal bank. But other advantages of BP’s videoconferencing system proved decisive. – Three elements were key for us-functionality, safety and, of course, price-says Paweł Dudek. 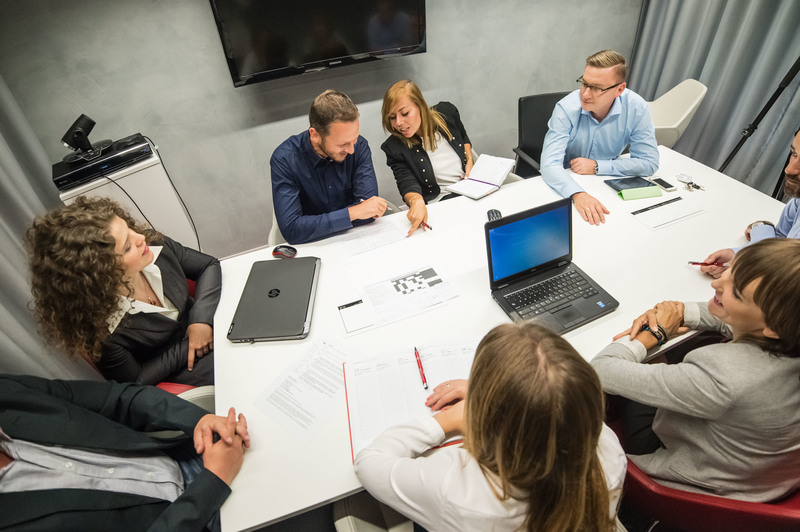 In such solutions, one of the key issues is security. The postal bank wanted the connections to be reliable and encrypted with the possibility of using the bank’s own certificates. – Security considerations are always a priority in financial institutions-says Paweł Dudek. As he explains, Huawei was perceived by the customer as a provider of solutions for telecommunications companies. – That’s why we paid special attention to the infrastructure. The conference bridge has a three-level security copy system and three levels of encryption. The system also provides security in connections from the outside world through the use of ABS 256 encryption, both for signaling and data stream – calculates. – Not unimportant is the fact that the solution we can expand without replacing equipment up to 6,000 users-he adds. But the aspects that spoke for Huawei’s offer were more. BP took into account such elements as the quality and purity of the image and sound in different external conditions. – The point was that the conference rooms have different acoustic models and different light scattering. We had to choose the solution that best coped with these challenges-he emphasizes. According to him, the key was also the fact that the bank could integrate this solution m.in. with already owned video terminals of other manufacturers and different generations. – We wanted to use them as part of the whole system-explains director Dudek. The solution implemented by Huawei met the expectations of the Polish bank. Such a communication channel-thanks to the possibility of creating frequent, cyclic “video meetings” – allowed the company from the Polish post group to better integrate employees in remote locations. – We were positively surprised by the possibility of sending presentations wirelessly. The need to pass a VGA / HDMI cable in order to view content is no longer our problem-concludes Paweł Dudek. The videoconferencing system has worked so well that the number of users is growing rapidly. The mobile solution was intended only for high-and mid-level managers. – Such employees are often on the road and we wanted to provide them with access to videoconferencing from anywhere. Over time, the popularity of mobile applications has also moved to the lower levels of the organization, and at the moment it is used by approx. 200 people-explains the representative of the bank. When asked about plans related to the expansion of the system, he replied that the postal bank does not exclude such a possibility. 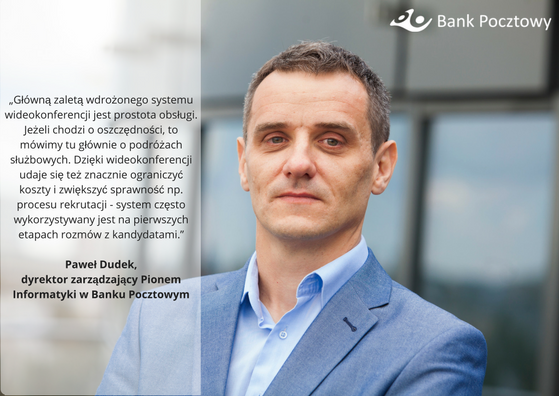 * The above is taken from an article published in Bloomberg Businessweek Poland, No. 10, October 2016, prepared in cooperation with Huawei. Photos: Archive Of The Postal Bank