Black Mirror: is a video game based on our own fears coming soon ?

Imagine a video game where there is no interface between reality and fiction. The only connection, a chip implanted in the player’s neck and linked to his neural system to adapt the game to… his most buried phobias. Exciting or terrifying ? For Cooper, hero of this episode” Playtest ” like Resident Evil, this challenge arouses his curiosity and he agrees to participate in the test phase of this game proposed by a video game company(he incidentally needs money). Immersed in the video game imagery and in the psychological limbo of the young man.

“We are far from the neurological hacking of the player”

There is a sense that the end of this game is not going to be the release of a princess like in “Super Mario Bros.”… But rest assured, from a technological point of view, “we are still far from achieving a neurological hacking of the player”, believes Anatole Lécuyer, research director at the national research institute dedicated to digital (Inria), whose favorite areas are virtual reality and brain/computer interfaces. Improving the interactions between the game and the player is indeed part of the current stakes, but for the moment, only our sensations are captured, via physiological computing.

Physiological computing for a new kind of games

Reacting according to the player’s state is one of the goals that many companies seek to achieve : “Magic Leap offers technologies to capture finger movements for greater finesse of the game. Others develop techniques to measure certain physiological parameters such as the conductivity of the skin, breathing, or heart rate to deduce a state or emotion on the part of the player facing the content of the game,” explains the researcher. At Inria, the integration of stress in the scenario of certain games with electrodermal sensors or monitoring the heart rate have already been tested. “In the OpenViBE2 project in partnership with Ubisoft, we proposed new concepts such as a tennis game that would offer benefits as soon as the player seems relaxed. Make him win a serve by an ace for example. The same goes for a Star Wars-inspired game : if the person is perceived as focused or relaxed enough, they can successfully lift a spaceship and become a Jedi like Luke on the planet Dagobah.”Others seek to play with our feelings such as Oshiete Your Heart on dating that uses sensory sensors to influence the outcome of relationships. The same goes for our scares with Flying Mollusk’s Nevermind which raises the level of the game according to the stress recorded in the player. Researchers are even trying to develop cameras that can capture players ‘ facial expressions like Affectiva. But for Anatole Lécuyer, “if one can capture stress and anxiety by combining several techniques, on the other hand, for other emotions, it is sometimes difficult or even controversial”.

BRAIN. As for the direct interaction with the brain, this one exists but is still very little developed : it is the brain-machine interface (ICM) (system of direct connection between a brain and a computer) with the neurological helmets (EEG) that capture the electrical activity of the brain. Video games are already using this technique but for a medical purpose: “Our start-up, Mensia Technologies, is working on neuro-adaptive technologies and is expected to release a medical product in 2018 (under clinical trial) requiring an electrode headset and a tablet for children with attention deficit disorder . The idea : train the brain waves related to attention and thus find a brain activity that was no longer observed for this disease. And all this at home in the form of a game instead of moving to the doctor,” explains Anatole Lécuyer. Still for medical purposes, games serve as therapy against phobias thanks to in virtuo exposures to anxiety-causing components in a progressive way and under the control of the sensors.

In this piece, Cooper must (in particular) deal with his phobia of spiders © Netflix

But even if we managed to “recover the fears” of the player, it would still be necessary to be able to interact with him in a very realistic way like this episode. “Currently, visiocasques have the disadvantage of cutting us off from the outside world because we cannot see our bodies or that of others,” explains Anatole Lécuyer. Even if it is progressing very quickly, according to him. “VR playstations already allow a real immersion in fiction with virtual reality headsets. However, there are still many challenges”. In this sense, laboratories are trying to model 3D bodies as avatars of players.

Thus, if they do not reach the sophistication of Playtest, technological advances tend towards this ultimate point of meeting between fiction and reality. For the philosopher Mathieu Tricot*, the great desire of technophiles is to lead to a virtual reality directly connected to the brain, eliminating any interface: screen, controller, keyboard and mouse. It’s the trendy spirit. “Since the 80s, the specialized press mentions virtual reality and the neural interface as the absolute goal to be aimed at. For what purpose? Belong to fiction, this imaginary universe. And that we cross the border through technology”.

DYSTOPIA. In this episode of Black Mirror, choosing fear as the common thread of the game, the series offers a dystopian vision of the realization of this technological dream. Drift: the confusion between the real and the fictional. “The game has always been at the heart of fiction. To play, I have to believe it but I can only play because I know this is all a game. With this ultimate technological stage, would there still be a game? No because we would destroy the spring, that of being sure that it is only a game. With the risk of being locked into the representation that then becomes our reality”, analyzes Mathieu Tricot. And indeed, a passage of Playtest, to the tune of a Magritte painting, symbolizes this slip, the limit that Cooper is crossing. “This is not a game,” he seems to warn. 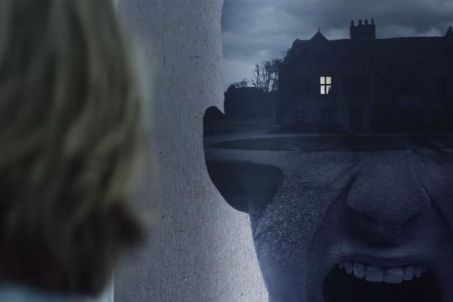 © Netflix: a reference to Magritte in Playtest ?

The philosopher shares this fear : “I think we are going the wrong way. We seek to multiply the interactions and “perceptual charges” of the games while more immersion in fiction does not necessarily lead to more engagement. The proof with 3D cinema that has not had the expected success”. But above all, for this one, “there is a part of delirium in this desire to make fiction”.