360-Degree staging of Mozart's "Figaro": do you want the complete opera?

A black god from heaven to the castle of Count Almaviva. He sees everything, this God. Every half hour one must come with white gloves, remove streaks and dust. The black god looks like a sinister lustful, but is a camera. Something like the current ultimate camera. Her name is OmniCam 360. Constructed by the Fraunhofer Heinrich Hertz Institute from ten 36-degree mirror segments and connected to ten Micro HD cameras.

The Count’s castle stands as a fifty-square-meter wooden cube – chipboard on the outside, a dream in mint green and beige on the inside, wallpapered with peacocks and fine plants – in the Studio hall. The walls around the camera can dance, turn into more and more new rooms.

Horst Sindermann once had SED propaganda broadcast from here disguised as entertaining journalism, a good 55 years ago. Now a completely different revolution is taking place here – the studio has become something like a mini-Babelsberg of Saxony-Anhalt.

Jan Schmidt-Garre, award-winning documentary filmmaker, opera director, is sitting on a stool one wall away. Between a lot of young people with iPads, in front of screens, computers. He has a thing tied around his head and over his eyes, which still looks very strange, although you have long known it from the game consoles of his children.

Schmidt-Garre turns erratically, the head wobbles, sometimes goes up, then slides gently to the side. Virtual reality (VR) glasses turn people into strange lunatics for other people who watch them on their adventures in other worlds. Schmidt-Garre didn’t want it any other way. He is shooting the first 360-degree opera in the history of music in Halle.

That is. This is not the first opera. That’s what he had in mind. „magic flute“. It all started three years ago. And Schmidt-Garre had actually thought, because the idea was so close that he had to hurry. But he didn’t have to, he knows by now. Those who were familiar with the technique and its effects talked him out of the “magic flute” relatively quickly. A good three hours with Tamino and Papageno in the virtual room, they said, no one can stand it.

He has now stayed with Mozart. It has now become a chamber play. So to speak, a total theater of the heart. “Marriage of Figaro”, final second act. Four voices, the orchestra by a Romanian composer to order Schmidt-Garres reduced to piano, violin, clarinet, cello. It sits, probably hidden from the camera’s view, in a side wing of the microcube in the studio.

The count, outside the door, senses fraud. Cherubino, the potential mistress of the countess, sung by a woman, is disguised as a girl. The count knocks, Cherubino flees from the window. Drama, love, despair, jealousy. Could be a prequel of “Love Actually”. Takes just under half an hour, works without explanation for anyone. The only catch: Schmidt-Garre’s “Figaro” unfortunately has to do without Figaro. He does not appear in the final.

He didn’t really think about the audience at first when he heard about the cameras and what you can do with them. He wanted to get out of the frontal theater as a director. Being in the middle instead of opposite. To stage the action around yourself. And, of course, to take the viewer with you at the end. To transfer him to Almaviva’s castle as an autonomous being, as his own director.

Trailer for the all-round “Figaro”

In order to interact with or display content from YouTube and other social networks, we need your consent.

The cameraman is coming. Something’s up. Maybe you still have to buy a camera in Halle. For heaven. You have to be able to see that about yourself too. The people from the Fraunhofer Institute are very helpful. Learn from every project. There is a fine electricity in the air.

The old dream of total theater, with VR glasses it could become a reality, of the real experience of a drama. Everyone watches their own story. Stronger, more individual, more intense than was previously possible. “It is given,” says Schmidt-Garre, “a lot of freedom to the viewer.“ There is no such thing as a total one. You wander around with your eyes. Is always afraid to touch the singers with the glasses, to get stuck on them while turning on the stool. Schmidt-Garre’s “Figaro” is, in a sense, a barrier-free opera.

That the singers are potentially constantly in the picture, that they have to be observable at all times, that unlike on stage there is no front and no back in the virtual space, they had to get used to that first. They are so used to singing, opera directors like to despair, preferably in a direction that does not exist in the virtual. Forward. For acoustic reasons. 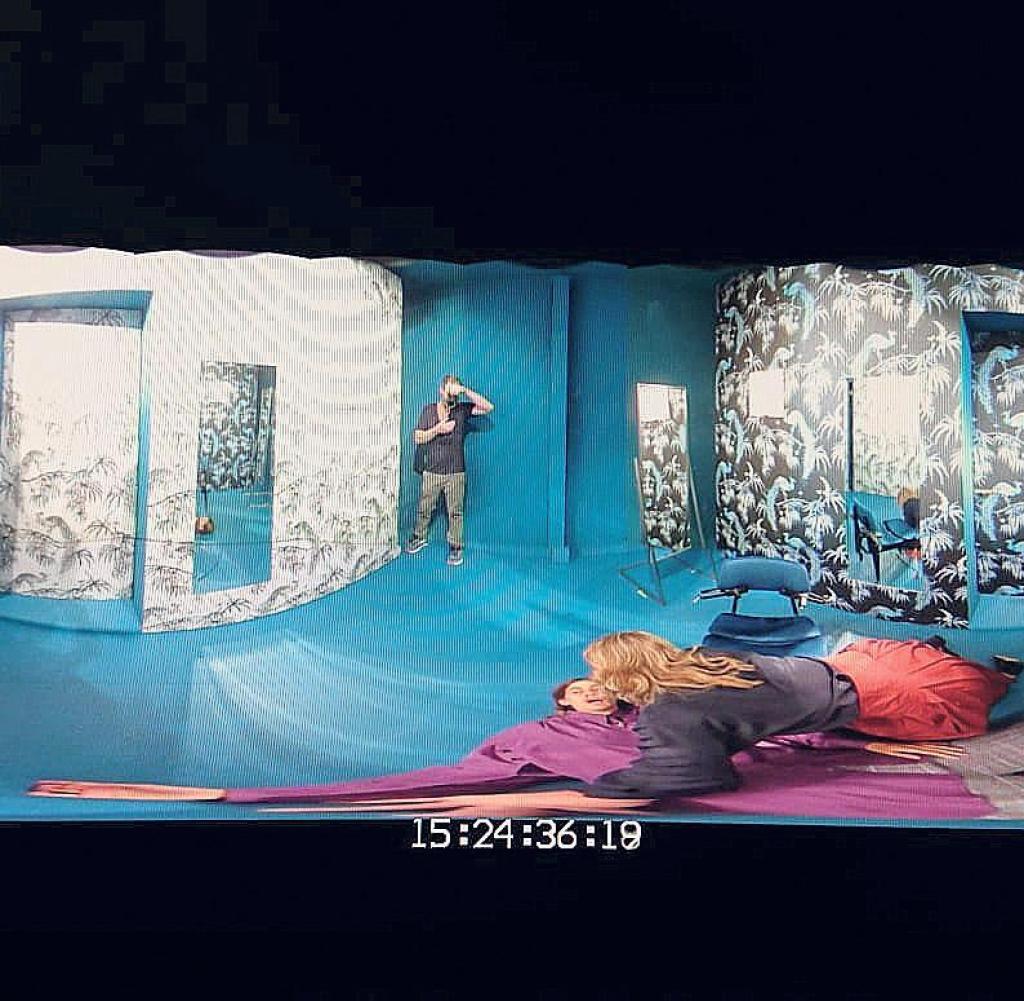 That is why, according to Schmidt-Garre, one of the standard positions for love duets in musical theater is that the tenor embraces the soprano from behind. So both can sing at the same time in the auditorium.

The freedom that he gives the viewer in the virtual space, he also gives the performers. They can, have to play much more intensively, free of acoustic conditions, work with glances, get very close to the camera. Schmidt-Garre does not believe that it is necessary to upgrade them for the big stage gestically more than here for the Hallens miniature cube.

With Rudolf Noelte, the great theater and opera director, Schmidt-Garre has learned that singers always have to play close-up, even in musical theater large gestures and gigantic dilated eyes can quietly save themselves. 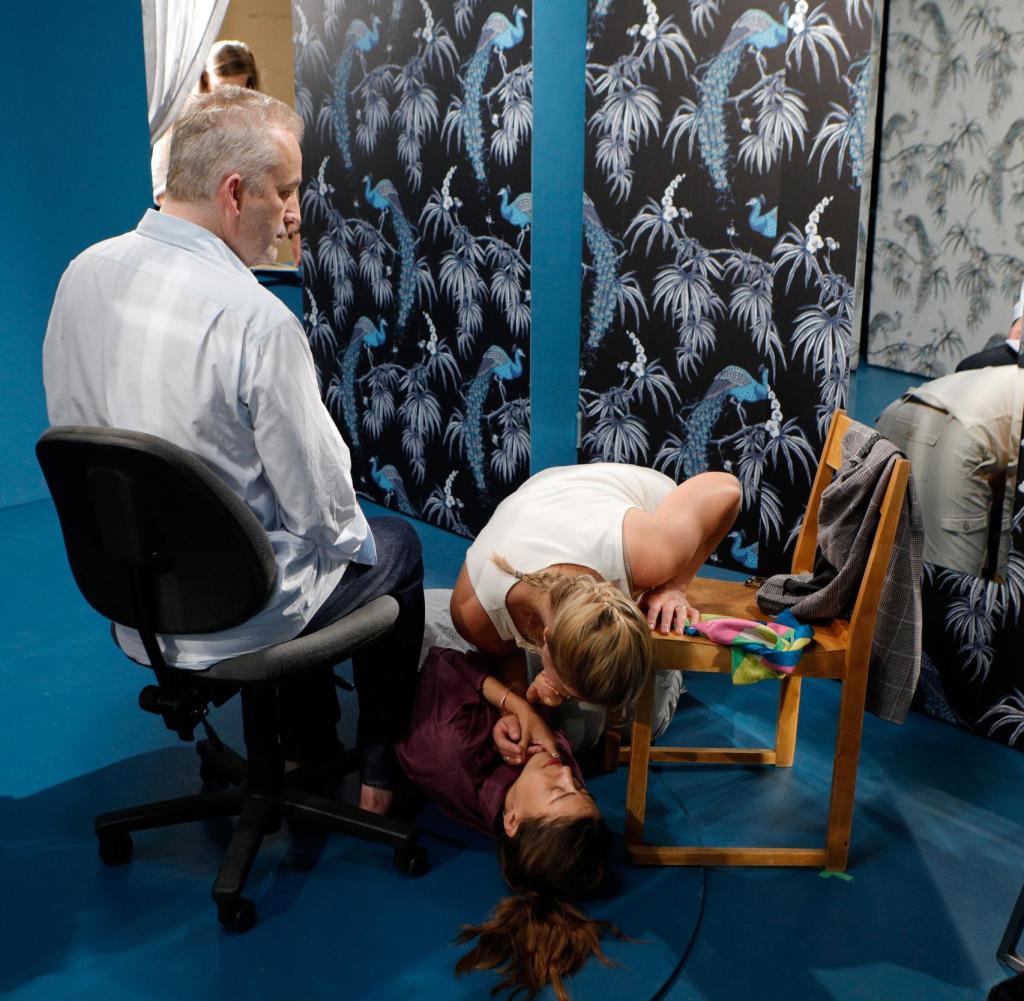 The freedom that Schmidt-Garre’s singers now have, however, also arose from a voluntary self-restriction. Schmidt-Garre wanted to use the new medium in its purest form. The half hour of Mozart is filmed without editing. There are no blinds. The camera, which would be potentially mobile, remains motionless in the sky.

The theatricality had to produce Schmidt-Garre differently. The walls move gently, open up new lines of sight, transform rooms. The singers move in these rooms, do not stand rigidly in one place. Schmidt-Garre stages a drama of looks, gestures, a bee dance of love around the camera.

A good quarter of a year later. Schmidt-Garre’s virtual “Figaro” has passed its test of fire. Could be seen on Arte, which co-produced and has been running a 360-degree division for reports for years. In Leipzig, the “Figaro” took place in one of the opera foyers. People were sitting on swivel stools. At a distance of two meters each. It looked spooky. It was funny even for Schmidt-Garre. Imagine what they are seeing, where they are in this strange new world of opera. So intensely immersed. A paradise for pickpockets.

The singers at your feet

We are also in a foyer. That of a Berlin coffee house. Inside, Schmidt-Garre has just told what has happened since Halle and how everything came before Halle. He brought VR glasses and his final “Figaro”. Inside, we would have become a bit too behavioral for this place.

That’s how you stand there. The chic, but still chunky thing like a media gas mask on the face. Everything is clear, brilliant, lint-free. Singers around you. Singers are at your feet. Jacquelyn Wagner as Countess, Olena Tokar as Susanna, Mathias Hausmann as Count and Valentina Stadler as Cherubino. They go to the throat that you want to intervene yourself, help. Inevitably you join in.

You can control with your eyes, click from one chapter to the next with the blink of an eye. Look for hyperlinks. Works amazingly intuitively. Subtitles were a problem. They didn’t exist. An app had to be invented first. Now everything goes. And Schmidt-Garre is also very happy with the new generation of VR glasses. They are also cheaper than the old ones.

Completely abandoned, he still says, he does not yet have the dream of the really first VR opera. Now Schmidt-Garre is preparing “Capriccio” by Richard Strauss for Leipzig. Without a black god, probably also without the formerly so fashionable video sequences (“I don’t need that”).

And then maybe you could do the “Magic Flute”… As a miniseries. Divided into chapters. Directed by various directors. As a kind of 360-degree continuation novel. You get a little giddy at the performance.