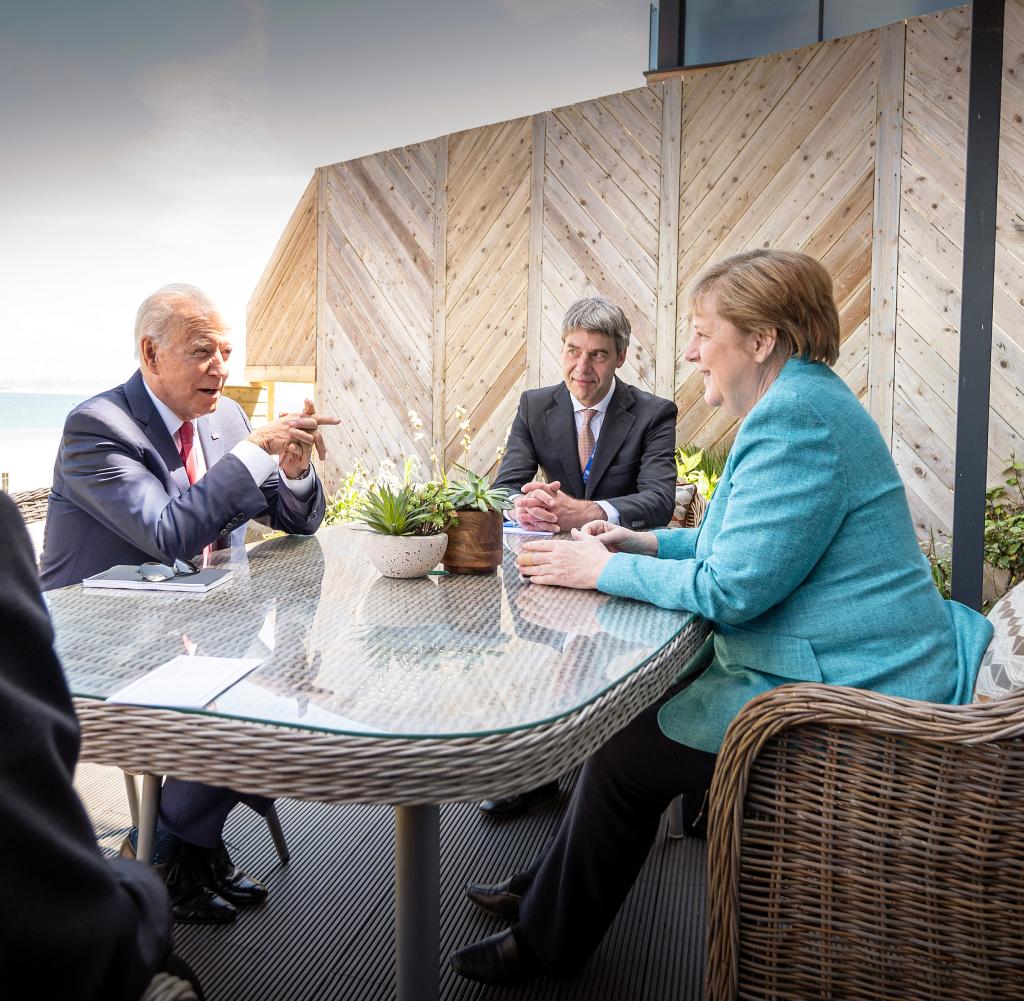 Chancellor Angela Merkel (CDU) has drawn a positive conclusion of her first direct talks with the new US President Joe Biden. The atmosphere during the discussions with Biden at the G-7 summit in Cornwall in southwest England was “very cooperative, it is characterized by mutual interest. They are very good, constructive and also very lively discussions in the sense of engaging with each other,“ Merkel said in an online press conference on Saturday on the sidelines of the meeting. “That’s what’s so special about this G-7 format here, that there is simply a very open and not so formal atmosphere for conversation.“

Merkel had previously met Biden on the sidelines of the summit for an exchange of views. It was the first physical meeting of Merkel and Biden in the closest circle because of the corona pandemic. Previously, consultations due to the corona pandemic were only possible by video or telephone conference. With Biden’s predecessor Donald Trump, there had often been difficult negotiations in the circle of the G7 because of his “America first”policy. The personal relationship between Merkel and Trump was also considered strained.

Merkel said after the conversation that she had spoken with Biden above all about his meeting with Russian President Vladimir Putin this Wednesday in Geneva. This was also a topic in the circle of the G 7. They exchanged their respective views. She also spoke with Biden about the NATO summit on Monday and the situation in Afghanistan after the withdrawal of US troops.

The Nord Stream 2 gas pipeline was also a topic. Here one is “on the right track”. She agreed with Biden that it was” existential and indispensable ” to continue to involve Ukraine in gas transit from Russia to Europe.

Three weeks ago, the Biden administration partially abandoned its long – standing opposition to the controversial pipeline between Russia and Germany and waived sanctions against the operating company-also out of consideration for relations with Germany.

Photos tweeted by government spokesman Steffen Seibert show the Chancellor and the President sitting opposite each other on an open-air terrace during their meeting. Merkel’s foreign policy adviser Jan Hecker and Biden’s national security adviser Jake Sullivan are also at the table. The day before, Biden had invited Merkel to visit the White House in Washington on July 15. The Chancellor is expected to return to the White House in Washington for the first time in more than three years.

Merkel and Biden are aiming for a new start after the low point in German-American relations in the time of Trump. Unlike Trump, Biden leaves no doubt about how important his relationship with Germany is. The visit to Washington is also likely to be one of Merkel’s last trips as Chancellor. After the Bundestag election on 26 September, she will step down as head of government.